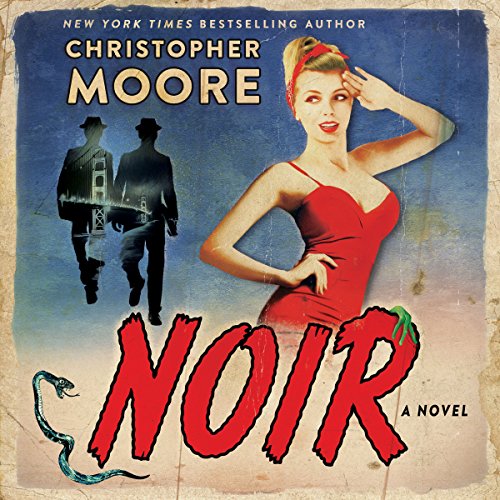 The absurdly outrageous, sarcastically satiric, and always entertaining New York Times best-selling author Christopher Moore returns in finest madcap form with this zany noir set on the mean streets of post-World War II San Francisco, and featuring a diverse cast of characters, including a hapless bartender; his Chinese sidekick; a doll with sharp angles and dangerous curves; a tight-lipped air force general; a wisecracking waif; Petey, a black mamba; and many more.

It's not every afternoon that an enigmatic, comely blonde named Stilton (like the cheese) walks into the scruffy gin joint where Sammy "Two Toes" Tiffin tends bar. It's love at first sight, but before Sammy can make his move, an air force general named Remy arrives with some urgent business. 'Cause when you need something done, Sammy is the guy to go to; he's got the connections on the street.

Meanwhile, a suspicious flying object has been spotted up the Pacific coast in Washington State near Mount Rainer, followed by a mysterious plane crash in a distant patch of desert in New Mexico that goes by the name Roswell. But the real weirdness is happening on the streets of the City by the Bay.

When one of Sammy's schemes goes south and the Cheese mysteriously vanishes, Sammy is forced to contend with his own dark secrets - and more than a few strange goings-on - if he wants to find his girl.

M. Bennett
VINE VOICE
3.0 out of 5 stars Not a favorite
Reviewed in the United States 🇺🇸 on January 19, 2023
Verified Purchase
I've read quite a few of Moore's books and this would have to be my least favorite. Still not a bad book but as much as I love Moore's humor, it felt a bit overboard in this book. It seemed like it was a constant one-liner. Of course, there were times that I chuckled but sadly, less than usual when it comes to his stories. There were some hilarious characters like the kid and the moon man but the main characters were overwhelming. The story... well, it seemed like there was a point to it but I kept finding myself drifting. Just ended up going along for the ride. Since I've already bought the 2nd book in the series, I'll continue. If I didn't have it on hand, I don't know if I would've.
Read more
Helpful
Report abuse

Frank Donnelly
VINE VOICE
4.0 out of 5 stars Spoof Runyonesque Noir, A Slow Start For Me, But Ended Up Being Very Humorous And Enjoyable
Reviewed in the United States 🇺🇸 on October 7, 2020
Verified Purchase
"Noir" is a comedic, science fiction version of American Noir Literature. The story is set in 1947 San Francisco. The novel has a comedic spoof aspect to it that, at times, I found very funny. At first I was very lukewarm about the novel as it was not at all what i expected. (How could it be? It is different to the point of being bizarre.)

The novel started slowly for me. But it was readable and I almost never quit on a novel. Sometimes this pays off and sometimes not. It paid off here. The longer I stayed with the novel the more I liked it. I grew to like some of the characters and enjoy the Noir type patter, that early in the novel, seemed like more of a parody of Noir.

I need to add that I listened to the accompanying audiobook and read simultaneously. This is an added expense but the comedic timing of the narrator, Johnny Heller, was excellent. For me, the extra expense of the audiobook was money well spent. Much of the patter has a "Runyonesque" flavor to it, of which an expert narrator can really make a difference.

In summary I ended up enjoying this novel a good deal. It is a spoof type novel that I could grow tired if I read too much more of it. But taken in small doses and mixed wth more serious reading, I could enjoy more of this. Thank You for taking the time to read this review.

~alex~
3.0 out of 5 stars Wouldn't Start with Noir if You're New to Moore
Reviewed in the United States 🇺🇸 on May 26, 2018
Verified Purchase
My love for Christopher Moore runs deep. Ever since I first stumbled across Lamb at my local bookstore, I’ve been a loud and loyal fan. I’ll tell anyone who’ll listen which book to read first (Lamb, obviously), which to real last (Ironically, his first, Practical Demon Keeping. It’s been awhile since I’ve read it, so perhaps my poor memory has been doing PDK a disservice); which features his best quotes (“Blessed are the Dumbfucks”) and which feature the best reoccurring character (Pocket). So it hurts giving Noir only 3 stars (really, 2.5, but I rounded up for loyalty).

I was very excited going into this book. In fact I pre-ordered it as soon as pre-order became an option. Noir has all the trappings of novels I usually devour in a few sittings. First of all, noir; I’m a sucker for inky noir, extra pulp. Secondly, the promise of sci-fi in the form of Roswell, 1947.

April 17th and my beautiful new Moore finally arrives. The cover. Oh, that cover! I love it. This is going to be good, I think, as I steal a quick sniff of the open spine. The first chapter is great. Murder by a serpent of unusual size! Everything I’m reading is great. The names... Sammy “Two-Shoes” Tiffen... Stilton, aka the Cheese... Two-Shoes with his lame foot is setting us up for some first rate comedy noir. But then suddenly I realize the perspective has changed. From first-person through Sammy’s eye, we shift to some third-person, seemingly, omniscient narrator. It was the beginning of the next chapter so I think, okay, from chapter to chapter expect the perspective to change. I can work with that. Until suddenly it wasn’t; the narration style starts shifting within the same chapter. Maybe I’m easily confused. Either way, I didn’t like it. A few chapters later this unnamed narrator is kind enough to tell us we don’t need to worry over his identity, he’s no one of any importance, but he knows things. He’s just here to fill in what Sammy cannot. Okay, trust in Moore, he doesn’t usually steer me wrong. In the final third or so, Mr. Mysterious Narrator throws the reader a bone by revealing his identity, which I really liked... until it serves no purpose at all. And that seems to be a common thread throughout Noir. A lot of what happens doesn’t really matter. These random plot points don’t play into the larger story beyond granting Christopher Moore a few more pages and an easy way to wrap things up.

A lot of people didn’t care for the turn the last third of the book takes. I personally enjoyed it and wished Moore would have done a better job weaving that sci-fi angle into Noir’s backdrop.

Also, was Christopher Moore paid by the fog metaphor? I get that good noir, especially noir set in San Fransisco, is thick with fog, however; to loosely quote Niles from Frasier, Moore began mixing metaphors like a Cuisinart. Some of them were enjoyable, though. I would include a few favorites, but I’ve leant my copy to a fellow Moore Nerd.

I touched on this earlier, but perhaps what bothers me the most is the way loose ends are tied up with Sammy needing to do nothing. Again, some felt like filler, a way to flesh out a perhaps incomplete idea. I’m thinking specifically of the Pookie O’Hare sub-plot; a despicable character treated even more despicably by Sammy and his crew.

Avid Reader
5.0 out of 5 stars Noir On Steroids!
Reviewed in the United Kingdom 🇬🇧 on September 6, 2022
Verified Purchase
I love Christopher Moore's books. I knew before I started reading this one that it would be a knockout, hilarious ride. And it was. Mr. Moore never disappoints. The guy's a comedy genius. Turning his immense talent to the noir genre was an inspired decision.
Read more
Report abuse

Weesie Malarkey
4.0 out of 5 stars “Perky Noir”
Reviewed in the United Kingdom 🇬🇧 on August 9, 2018
Verified Purchase
In his own words, Moore describes this novel as “Perky Noir”. I’m not sure that he has it in him to write truly dark novels. I’ve been a fan ever since I discovered ‘Bloodsucking Fiends’, and I’ve read everything he’s written, before and since. I’m sorry to say that it wasn’t close to the quality of some of his earlier books. Maybe Noir just isn’t his genre? Supernatural Comedy with a large helping of Romance? Humorous reworking of classical texts? He can do it with his eyes closed. I just didn’t get a post-war vintage feeling from this book. Despite all the obvious research he’s done, San Francisco just seemed too contemporary. I’ve read a lot of memoir written in and about the forties and fifties, and this didn’t evoke that. All that said, a Moore misfire is still a bloody funny, enjoyable book. It just loses a star.
Read more
One person found this helpful
Report abuse

LG
2.0 out of 5 stars Disappointing
Reviewed in the United Kingdom 🇬🇧 on December 4, 2018
Verified Purchase
I love Mr Moore’s work. This didn’t know what it wanted to be and ended up as nothing of significance. Certainly not very amusing. I’m afraid his worst work for years. Now let’s have another Shakespeare mash up and get back on track.
Read more
Report abuse

Kindle Customer
5.0 out of 5 stars Funny and silly
Reviewed in the United Kingdom 🇬🇧 on May 11, 2019
Verified Purchase
Always love reading his books. He embodies so many voices and has such a great sense of humour! Took a while for this to get going but once it did it flew by and i was finished. Great characters and fun ideas for a plot.
Read more
Report abuse

Challenger
5.0 out of 5 stars Twisted.
Reviewed in the United Kingdom 🇬🇧 on August 27, 2018
Verified Purchase
Loved the bizarre twist in the plot. Stock noir meets alien cover up conspiracy. A bit of a change from his previous stuff but the only typical thing about Cristopher Moore is that nothing is typical Christopher Moore.
Read more
Report abuse
See all reviews