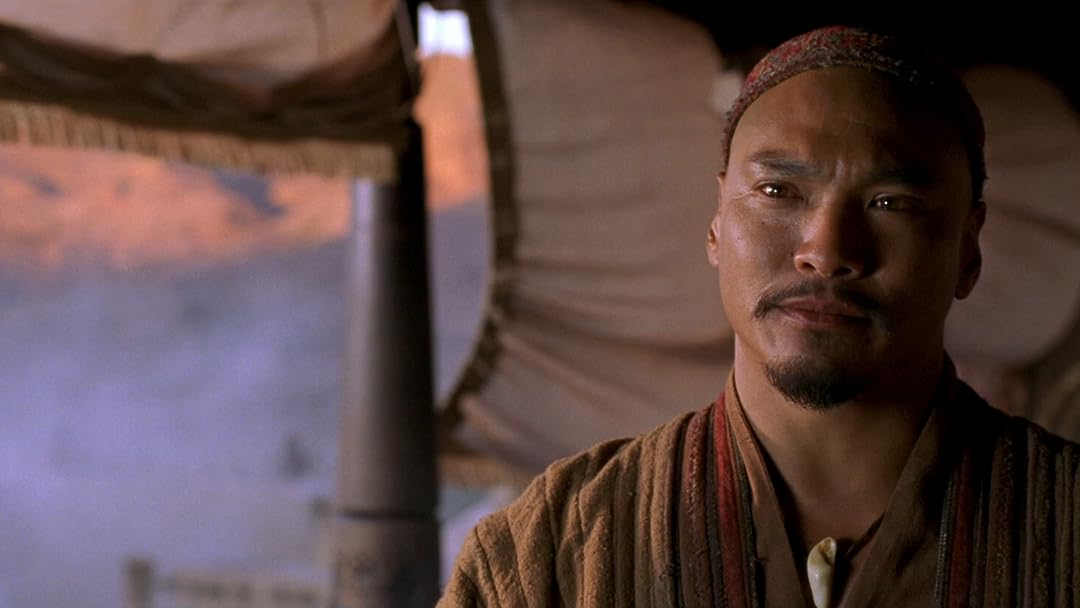 Edgar Soberon TorchiaReviewed in the United States on April 21, 2022
3.0 out of 5 stars
Passer's Last
Verified purchase
Kazakhstan achieved independence in 1991 and since then film activity increased in the country. "Nomad", at first sight, reminds me of those ambitious and unfocused productions sponsored by national cinemas, so often plagued with the participation of capitals and talents from all over the world, each with a different agenda: in this case, there were people from many countries, as Passer, Becker, Hernández, Steiger, Forman, Ibrahiimbeyov, O'Connor, Dacascos and Lee.

However, production, which was well advanced in 2004, stopped due to other reason: shortage of funds. When the US firm Weinstein Company joined production, to round off the needed 40 millions, the Czech director Ivan Passer and the Swiss cinematographer Ueli Steiger were replaced, and modifiations were made to the script written by Azerbaijani producer and playwright Rustam Ibragimbekov, to put greater emphasis on romance and bloody battles.

The reasons that I can think of to explain these drastic changes are that, first, Passer was repulsed by the representation of violence in films, which, in the eyes of the Weinsteins, did not make him suitable to narrate the struggle for territorial unification of Kazakhstan; second, USA cinema, by culture or tradition, exalts sex and death, and every lovebite and every blood jet have their currency equivalent; and third, that the Wensteins had the typical pretenses of a new partner, such as wanting "everything different" (to their liking), wanting to reaffirm their ownership and contribute "ideas", even if the material already shot had enough value.

Aside from the strange casting of Mexicans Kuno Becker (in the central role of the descendant of Genghis Khan who, in the 18th century, unified the tribes of Kazakhstan) and Jay Hernández (playing Erali, his best friend) as Kazakhstani youngsters, "Nomad" is better than what bad opinions claim. Any complaints of dialogues, as the hero telling his woman that she has the scent of the Moon? Well, I have heard worst lines than that, written by gurus of post-modern cinema, and people go wild about them.

"Nomad" is a wide epic fresco with a youthful spirit (so you can ride along with Kuno and Jay, anyhow), with aesthetic rigor in costumes and decorations and attention to cultural traits, customs and protocol of the region, as far as talent and money could afford them; with majestic views (sorry for the anti-landscapers) and exciting action and risky scenes. There is nothing new in the story of the two young males in love with the same woman, or the teacher who trains and then lets his disciple take flight, but as an adventure product, as a free historical account about the fulfillment of a mission/prophecy, the movie achieves its entertainment and artistic objectives, despite the alterations and changes of director and cinematographer.

Sadly, Passervdied in January 2020 and never filmed again, but, in spite of the Weinsteins, "Nomad" is not a contemptible addition at all to the director's short filmography, in which contention, rigor and scrutiny in project selection ruled.

Brooklyn PhantomReviewed in the United States on February 24, 2021
3.0 out of 5 stars
Interesting historical drama.
Verified purchase
This is an entertaining film. Several good battles and fights. I wanted to see more of JSL and MD. Decascos was good as a henchman/soldier. Lee was great as always. The live story should've been stronger more kisses and hugs would've made it seem more intense. Recommended for fans of historical dramas

ParamedikistoReviewed in the United States on April 27, 2011
4.0 out of 5 stars
Interesting film
Verified purchase
This isn't a film for everyone, and if you're expecting awesome battle scenes and tons of effects you are going to be disappointed. What this film does is portray a little known yet historically important culture in a fairly authentic and entertaining manner. it is ideal for history buffs and fans of Russian movie directors.

I watched this with my Kazakh wife, who loved the portrayal of her people, even though the main actors were not Kazakh. After renting it, she insisted that we buy the DVD so that our kids could watch it for some perspective on the culture they come from. What we agree on is that it is beautifully filmed, with good cinematography. There is a bit of the "Russian movie" effect in that it can be slow at times, but by Soviet film making standards, this is the Russian equivalent of "Speed" or "Crank".

Personally, I liked "Mongol" better, but the fact that anyone managed to make a watchable film out of Kazakh history is still pretty impressive.
8 people found this helpful

TundrabeastReviewed in the United States on August 22, 2010
3.0 out of 5 stars
A Bit Stiff
Verified purchase
I did like the movie, but the only thing that kept it at 3 stars for me was that the lines came across a little stiff at time. Not enough to ruin the production, but enough to be distracting at times. I have a few other movies about the Khan decendants that were made in China and Russia. Sometimes I think it seems like a better movie when in another language with sub titles....Maybe thi would have been better that way too...

Amazon CustomerReviewed in the United States on May 3, 2017
5.0 out of 5 stars
Great movie
Verified purchase
This was a sleeper movie I believe.....was a great movie with great acting, clean, no fowl language, story theme very serious with some sword fighting...too bad I didnt get to see it on a big screen!
4 people found this helpful

Dan A.Reviewed in the United States on July 4, 2021
2.0 out of 5 stars
Not that good
Verified purchase
Not all that good pretty slow start

derekReviewed in the United States on January 26, 2010
4.0 out of 5 stars
Enjoyed it, it does what a movie is supposed to
Verified purchase
I was not looking for a historical documentary---just something with the flavor and expanse and excitement of that period in history. Talented actors with impressive gymnastic and equestrian abilities, along with gorgeous scenery made this a very enjoyable film--loved the costumes and sets, too. I would recommend it.
4 people found this helpful

Hans Dieter WulfReviewed in the United States on March 14, 2014
2.0 out of 5 stars
Bad Choice
Verified purchase
I purchased this for my grandson, age 10, and it was a mistake. He watched perhaps 10 or 15 minutes and turned it off. I thought the film was low budget, poorly acted, far too much violence for violence sake and therefore it earned a one way trip to the trash bin.
See all reviews
Back to top
Get to Know Us
Make Money with Us
Amazon Payment Products
Let Us Help You
EnglishChoose a language for shopping. United StatesChoose a country/region for shopping.
© 1996-2022, Amazon.com, Inc. or its affiliates