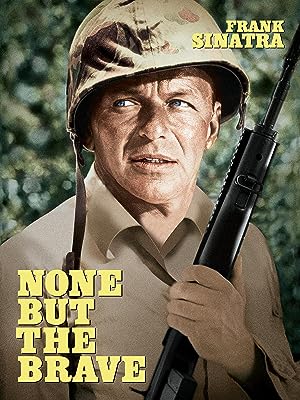 (471)
6.51 h 45 min1965NR
A crippled C-47 transport crash-lands on a remote Pacific island. For the Marines aboard, World War II becomes smaller but no less deadly.

G. MartinReviewed in the United States on September 10, 2016
5.0 out of 5 stars
Frank Sinatra starring role/director....great movie
Verified purchase
One of the few 1960's war flicks that I saw that was filmed in color. This was a masterpiece. Frank Sinatra gave a very stunning performance, even though he was too old for the part of a Navy Corpsman. Somehow, I don't think a 40-50 year old playing the role of a Navy Corpsman would be very convincing back then in WWII but hey, it could happen. This was a great cast and the Japanese actors were spot on with how they portrayed their roles. I really loved this movie back in the late 60's when I first saw it and it still holds my captivation now. Performances by Clint Walker as the commander and Tommy Sands as the smart mouthed Lieutenant were very well done. A setting where two opposing sides in a great war set aside their differences to work together to survive, an interesting concept in a war picture directed by Frank Sinatra. OK, the whole airplane dogfight scene at the beginning of the movie is very campy and toy like with the models, along with the C-47 crash-landing on the island....but it still works for me. A movie well done overall and one that I would recommend.
7 people found this helpful

glrReviewed in the United States on April 26, 2019
3.0 out of 5 stars
This does not appear to be a "factory" disk.
Verified purchase
While the overall quality of the DVD was ok, I question the origins of this copy, as it appears to be a DVD-R. i.e. a copy of the original. I paid a premium (14.95 vs. 8.95), hoping for a better quality movie. It is possible that this is the best quality out there, but the only way to know is to order the cheaper version.

The 3 star rating is not due to the content (it's one of my favorite movies) but the fact that this appears to be a "burn to order" movie charging a premium. I am planning to order the lower cost disk to compare, and will add to this review.

pstenReviewed in the United States on March 5, 2020
1.0 out of 5 stars
Fond of the movie, but the Prime Video version is unwatchable unless you understand Japanese
Verified purchase
This campy movie will always be worth a watch in my mind. I have fond memories of watching it with my late grandfather. Despite the mediocre acting, laughable wardrobe—I didn't realize a group of crash-landed marines could have such nicely pressed shirts—and terrible special effects, the story is interesting. Not only did Sinatra star in it as a hilariously overaged marine corpsman, but it was his also first (and last) directed film.

My rating doesn't reflect the movie—even though it probably doesn't deserve many more stars despite my affinity for it. The issue is that a good portion of this film is in Japanese, and the digital version of it doesn't have subtitles. Subtitling was also a problem with the DVD release of this movie, but you could at least turn on closed captioning. You'd have to deal with having the text on the screen for spoken English as well, but at least you could understand what was going on during the parts in Japanese. Closed captioning in the digital version simply says "[SPEAKING JAPANESE]" when the focus is on the Imperial army.

The VHS release I owned back in the late nineties or early noughties had subtitles when appropriate. Oddly enough, that seems to have been the best release of this film in terms of presentation. Until Warner Brothers decide to revisit the cut, which is extremely unlikely, this is not worth the purchase on Prime Video unless you are bilingual. Stick to the DVD version and turn on closed captioning so that you can enjoy the full extent of the story.

Jeffrey J. FowlerReviewed in the United States on December 31, 2012
3.0 out of 5 stars
None but the surviors
Verified purchase
I have seen this movie over the years but finally gotten around to buy the dvd version. Made in 1965 during
the early days of the Vietnam war, this little gem produced by Sinatra Production shows how how lives are
suddenly thrusted into conflicts and decision making during a war. The Japanese soldiers were simply cutoff and
forgotten on a small island, while trying to uphold the diginity and honor of serving the Emperor of Japan.

Thrusted into their domain is a C-47 transport full of Marines, led by a gung-ho and an overacting Tommy Sands
I thought. Clint Walker is the pilot and assumes command, while trying to keep everyone alive thru his experience.

But the scene where their transport is being escorted by fighters is totaly so phony and almost laughable.
The mid-air crash between the two fighters and when the transport crashes into the beach was done on a shoe string budget.
Which really surpises me considering it has Sinatra's stamp on the movie. Maybe they were simply trying to save some
money due to logistic filming cost? But any kid could tell these were simply models.

Sinatra plays a Navy medic and seems to play his role well. The ending was sort of predictable but overall it's a
nice little movie to watch some Saturday.
5 people found this helpful

KarToon12Reviewed in the United States on January 20, 2021
5.0 out of 5 stars
A great war movie but has odd subtitles
Verified purchase
This is a really great war movie, although it seems to have a history of having odd subtitles. Some versions that play on TV don't include the subtitles. Thankfully, this DVD does, but it seems that the subtitles must've been redone by a different person/company, because the subtitles on the old VHS tape I have are slightly different than in this version. So be warned.

Harry BrewerReviewed in the United States on June 2, 2008
4.0 out of 5 stars
None But the Brave
Verified purchase
This is one of Sinatra's better vehicles. Some have criticized him as an actor but he proves himself to be more than capable in this movie. Sinatra was a multi-talented man, movies being his second vocation. The biggest problem with Sinatra, the actor, was he had a tendency to be lazy. He never liked to do more than two takes for any scene he was in. His claim was that a scene would loose its 'freshness' if more than two takes were done, that may be so but it led to some sloppiness.

None But the Brave would be the fifth & final movie he would receive a producer credit, it's also the only movie he directed. Sinatra portrays Maloney, a corpsman. His role isn't the overshadowing role one would think he would cast himself into, after all, he was the producer & director. The screen time of the Japanese actor, Tatsuya Mihashi, is the actual starring role. He's the narrator of the movie &, in many ways, it's told from the Japanese perspective. Clint Walker portrays Capt. Bourke, the pilot of the plane that crash lands on the island. His role is as large as Sinatra's. Tommy Sands portrays the marine 2nd lieutenant who's on his first command. His portrayal is at times comical because he's so green & gung ho. It's a pretty good performance.

The movie revolves between the two military groups who are at war with one another, both stranded with no means to communicate to their respective commands. It's an intelligently done movie, showing both sides of their humanity. What makes this movie different, especially for its time, is the way the Japanese are portrayed. They're presented as humans also, not just a mindless enemy. The Japanese officer proposes a peace so that both groups can survive. An uneasy peace ensues that's constantly in jeopardy of being destroyed. Both sides agree to the truce until a rescue team shows up, doesn't matter which side. The humanity of the film is touching especially when Maloney goes to the Japanese camp to amputate the leg of a Japanese soldier that has gangrene. There's a moment when both sides have to pull together as a team when a monsoon hits the island. All this, of course, is setting up the inevitable conflict between the Americans & Japanese in the final scene. It's sad to see this happen when the two groups have done so much to overcome their differences. But the other thing is they are soldiers who are loyal to their countries, bound to duty & defense of their homelands. The ending is cliched but true: "No one ever wins".
3 people found this helpful

That said, the story is excellent and the roles played by the "Chairman of the board" and Clint Walker were also very good. The Japanese actors were very good themselves. This is really a pretty decent anti war film and I for one am glad to see it again.
3 people found this helpful
See all reviews
Back to top
Get to Know Us
Make Money with Us
Amazon Payment Products
Let Us Help You
EnglishChoose a language for shopping. United StatesChoose a country/region for shopping.
© 1996-2021, Amazon.com, Inc. or its affiliates