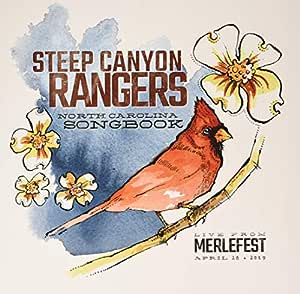 GRAMMY-Award winning bluegrass outfit Steep Canyon Rangers brought a special surprise to attendees of their performance at Merlefest 2019. To honor their home state, the Rangers performed a selection of songs from the artists of North Carolina. Featuring unsung Carolinian heroes like Ola Belle Reed and Elizabeth Cotten to world-renowned performers like Thelonious Monk, Doc Watson, James Taylor and Ben E. King, the Rangers' live North Carolina Songbook performance shows why the Tar Heel State continues to celebrate their legacy of musical excellence and influence that dates back over a century. This first edition of the North Carolina Songbook arrives on North Carolina Flag Tri-Color vinyl.

4.9 out of 5 stars
4.9 out of 5
15 customer ratings
How does Amazon calculate star ratings?
Amazon calculates a product’s star ratings based on a machine learned model instead of a raw data average. The model takes into account factors including the age of a rating, whether the ratings are from verified purchasers, and factors that establish reviewer trustworthiness.
Top reviews

L. Humphreys
5.0 out of 5 stars Simply Amazing
Reviewed in the United States on February 10, 2020
Verified Purchase
A great collection of eight songs by the people who Master their craft.
Read more
Helpful
Comment Report abuse

Steve RammTop Contributor: Classical Music
TOP 500 REVIEWER
5.0 out of 5 stars A must for SCR fans – everything from Ola Belle Reed to Ben E. King and Thelonious Monk!
Reviewed in the United States on July 4, 2020
Okay, if you are a Steeps fan (I found them early on) you need this CD. And those who aren’t sure they like “bluegrass” should check it out too.

The North Carolina string band (there’s a drum on one or two tracks) pays tribute to their home state by covering songs by NC natives of many genres of music. We get Ben E. King’s “Stand By Me”, and James Taylor’s “Sweet Baby James” along with Libba Cotton’s “Shake Sugaree”. Yep, Ola Belle Reed never performed her song “I’ve Endured” the way the Steeps do, but it’s a great way to get her music out there. And while Monk’s classic “Blue Monk” is piano based, the Steeps omit the keyboard to give their “bluegrass version”.

Of course you can say “North Carolina” without acknowledging the late Doc Watson. The Steeps don’t cover his guitar playing numbers here but chose a ballad – Your Lone Journey” – composed by Doc and his wife Rosa Lee. As a bonus a portion of the proceeds from this album (recorded at the 2019 Merelefest) to the Doc Watson Student Emergency Fund at Wilkes Community College – which operates the annual Merelefest on its campus.
The CD comes in a simple digipak with minimal info – just the track list (twice). No pictures of the Steeps and not even a list of the members of the band!

But it’s what’s on the album that counts and that is well worth five stars!