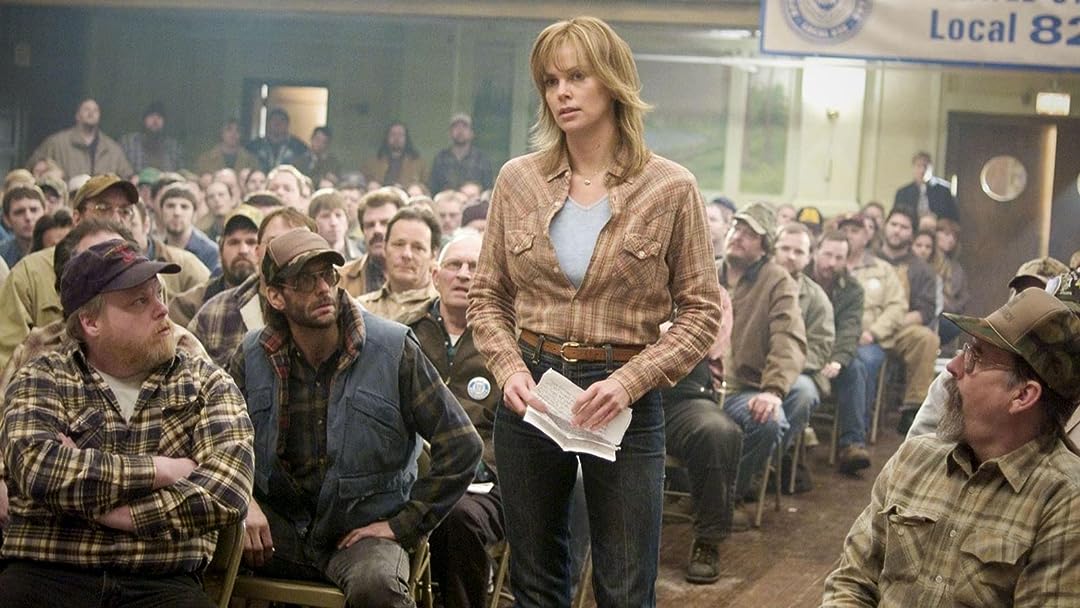 (1,541)
7.32 h 6 min2005X-RayR
When Josey Aimes returns to her hometown in Northern Minnesota after a failed marriage, she needs a good job.

John P. Jones IIIReviewed in the United States on August 11, 2019
5.0 out of 5 stars
“Her clothes are dirty, but her hands are clean…”
Verified purchase
… to paraphrase only slightly, by a change of gender, one of the classic lines from Bob Dylan’s “Lay, Lady, Lay.” This song, as well as other Dylan works is prominently featured in this movie, including the very appropriate “Girl from the North Country,” with the apt verse “If you are traveling in the north country fair, Where the winds beat heavy on the border line, Remember me to one who lives there, She was once a true love of mine…” Bob Dylan is the most famous former “Ranger” in the world, as those who inhabit the Mesabi Range in northeastern Minnesota are called. Not once, however, even in the credits, does this movie indicate that Dylan was raised in the Mesabi’s heartland, Hibbing.

I recently re-watched “Fargo,” which is primarily set in Brainard, Minnesota. Frances McDormand played the part of the sheriff in “Fargo.” She also plays a key role in “North Country.” As is Amazon’s delightful custom, they saw the links between these two movies and suggested that I might want to watch “North Country.” It was an excellent suggestion.

Sexual harassment. That is the central topic in this film. And how one woman decided to say: “Enough.” I struggled with two issues while watching this movie. First, could all of this have possibly happened? Could men really be that brutal and demeaning to women? Reluctantly, I concluded that they probably did. Consider how male soldiers will often treat women in time of war… And so that awful scene, of the “port-a-john,” probably happened, if not actually at this mine, then some other. Secondly, the sheer inadequacy of the term “sexual harassment” to describe such behavior. There are so many gradients covered by those two words, from an unwanted comment about a woman’s body, done more than once, to throwing a woman down on a slag heap, hopping on, but not actually “consummating” the “relationship.” I have to think how the term “female circumcision” was (and occasionally still is) used to describe the same act that is today much more appropriately called “female genital mutilation.”

Charlize Theron is an excellent actress who plays Josey Aimes, one woman, like so many, who drew some bad cards in life, including a husband who beats her, and whom she finally decides to leave. She has two kids that she must raise as a single mom. Frances McDormand plays the union representative (for the women) at the mine, and she gets Josey a job driving a truck. Welcome to the world of relentless sexual harassment. The film opens with the statement that in 1975, the iron mines of northern Minnesota hired their first female miner. By 1989, males still outnumbered females by 30 to 1. Throughout the movie, in the background on the TV, there are the news segments from the 1991 confirmation hearings of Clarence Thomas to the Supreme Court, and the accusations of sexual harassment from Anita Hill.

And the Courtroom. Much of the ending to the movie is played out there. As at least one other reviewer indicated, the scene(s) were somewhat unrealistic in terms of what was being permitted. From my own perspective, it seems that virtually anything is permitted in a courtroom, so I was OK with the movie’s version. To me though, the real turning point does not come from the gavel of a judge but the willingness of one man to stand up in the union hall, and say, in effect: “I’ve been a Ranger all my life, and I now so ashamed of that label, for how we treat women.”

As a final personal point: I had a long-term friend whom I visited numerous times who lived just north of Bemidji, Minnesota. Though at almost the same latitude as Hibbing, Bemidji seems much more prosperous. My friend told me that those who lived “on the Range” had a much more hard-scrabble existence. And I felt this movie truly brought that aspect out as well, with the “hard-scrabble” life of the men only exacerbating their treatment of the women.

Overall, an excellent 5-star, plus movie, topical today, as I just read of the suicide of Jerry Epstein, who personified the even more terrible treatment of women by men at the other end of the economic and political spectrum.

WriteNowReviewed in the United States on August 18, 2020
5.0 out of 5 stars
Excellent but hard to watch
Verified purchase
This is about the first class-action sexual harassment suit. After the Supreme Court said that women could work in any kind of job they wished to work, women were supposed to be allowed to work as equals in traditionally male jobs. The women in this movie went to work in a coal mine where men outnumbered them at least 20 to 1. The men did everything they could to make the women quit. Sexual harassment and rape were their tools. It led to the first class-action suit to be filed on the basis of sexual harassment. And it is still pertinent, which is how we got to the #metoo movement.
2 people found this helpful

TylerReviewed in the United States on February 18, 2016
4.0 out of 5 stars
English Review Assignment
Verified purchase
“North Country” is a film that focuses on a true story about a woman fighting for the equality rights of all women in the workplace. Suspenseful and heartwarming, the movie follows a mother, Josey Aimes, as she is sexually harassed in her place of work and fights against all odds to ensure the safety of women everywhere in the workplace.
The movie itself is fantastic and takes you through an emotional rollercoaster. The director really knew how to pull at the audience’s heart strings like a harp, and get the audience to feel as though they are in the movie, experiencing these emotions alongside the characters,
During the period of the 1980s, women are generally not accepted in male predominant workplaces, such as the mines. The movie gives a great depiction of the expected and unexpected treatment of the women in these said mines. It drives one to feel the pain these women feel as they go to work and their mistreatment grows every day. The film gives a great emotional idea of the inequality in the workplace at this time.
The move’s court scene, however, is not as appealing as the rest of the film. The director attempted to keep the emotional level of the movie as high here as the rest of the film. However, doing so caused scenes such as the court scene to appear unrealistic and a bit cheesy and glorified. A court, in real life, would unfortunately never work the way the movie depicts, and thus takes away from the realism of the film.
Nonetheless, “North Country” is a brilliant film that will forever change the way I, personally, perceive women's rights and workplace inequality for the rest of my life.
14 people found this helpful

Donna Jean RutledgeReviewed in the United States on December 5, 2020
5.0 out of 5 stars
One of My Favorite Movies of all time
Verified purchase
I have watched this movie at least 5 times. It is inspirational to me! I love the acting; development of the story; its closeness to the real truth and the significance for harassment in the world of work for women. I ask my students to watch this movie. it is very realistic about struggles in the work place where men have dominated! Great movite!
One person found this helpful

S. WhiteReviewed in the United States on September 12, 2015
5.0 out of 5 stars
Good movie
Verified purchase
Movies like this are important to show people what courage and integrity means, and how to keep from being a coward. Anyone who thinks the characters in this movie were too black and white obviously was out of the room microwaving popcorn or going to the bathroom when the protagonist's mother, father, and son were on the screen, as well as her best friend and her greatest enemy through most of the movie. Seeing all of these people grapple with the truth of what happens to her is much of what the movie is about. The movie brought me to tears several times, especially the union meeting before the trial. It's stunning to think of women going through such and having absolutely no recourse, but because of those who were willing to fight this fight, women now have some degree of protection. Charlize Theron is great in it, as are all of the other actors. Very inspirational.
4 people found this helpful

LATEACHER1XReviewed in the United States on November 15, 2021
5.0 out of 5 stars
Remarkable true story with standout performances.
Verified purchase
Great film based on the book, "Class Action". The movie changed a few details, but all the harassment scenes are real. Some of the actual female miners are cast in the courtroom and union meeting scenes. Acting is superb. Richard Jenkins as Josey's dad, Thomas Curtis as young Sammy, Michelle Monaghan (Sherry) are outstanding. And Frances McDormand gives a highly acclaimed performance which is her trademark.

S ContrerasReviewed in the United States on August 22, 2021
5.0 out of 5 stars
Loved this.
Verified purchase
Powerful direction by Caro. Beautifully moving and strong performance by Theron. Jeremy Renner also give a powerful performance. An important film about female empowerment and workplace inequity awareness.

PendRReviewed in the United States on November 1, 2020
5.0 out of 5 stars
Touching, moving, and transforming!
Verified purchase
This movie shows how the courage of one lady and her lawyer to stand against a giant company, gave the sexual protection policy in all American work places. This is a must see movie. Make sure you're not sleepy when watching it! Amazing!
See all reviews
Back to top
Get to Know Us
Make Money with Us
Amazon Payment Products
Let Us Help You
EnglishChoose a language for shopping. United StatesChoose a country/region for shopping.
© 1996-2022, Amazon.com, Inc. or its affiliates