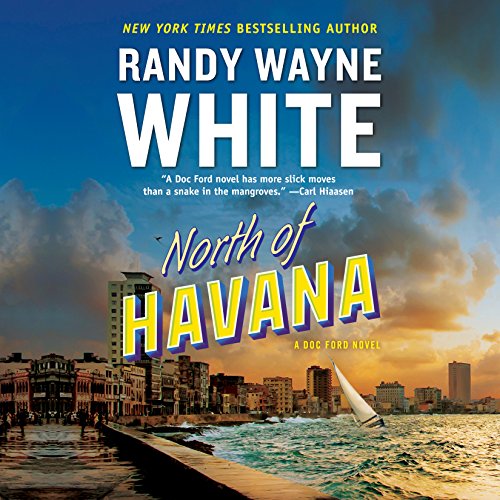 North of Havana by Randy Wayne White is now available for the first time in audio!

"We'll drop anything we're doing to read a new Randy White novel and be glad we did." (Denver Post)

Randy Wayne White's Doc Ford novels have been praised as "witty" (San Diego Union-Tribune), "must-reads" (Chicago Tribune) and "superb" (Denver Post). In his fifth Doc Ford novel, White takes Doc Ford to Havana, where his friend is being held by the Cuban government. Still haunted by his suspected involvement in a plot against Castro, Ford ventures to Cuba - where he finds himself entangled in a web of murder, revenge, and assassination.

4.4 out of 5 stars
4.4 out of 5
555 global ratings
How are ratings calculated?
To calculate the overall star rating and percentage breakdown by star, we don’t use a simple average. Instead, our system considers things like how recent a review is and if the reviewer bought the item on Amazon. It also analyzes reviews to verify trustworthiness.
Top reviews

bcbeads
5.0 out of 5 stars An interesting glimpse of Cuba
Reviewed in the United States on September 6, 2020
Verified Purchase
I am a fan of Doc Ford. I studied Biology in another lifetime, and I appreciate the marine science that is in present in every story. The range of settings around the Gulf coast is special to me, as I lived in New Orleans for 30 years and visited the Gulf offshore islands of Florida as well as the Keys, and some of the northern Caribbean islands, including Santo Domingo. So the accuracy of place descriptions is spot on. And I like Doc Ford; he knows his biology. The mysteries and adventures are will written; every book is page-turner. But I appreciate the personal lives of the people of Dinkins Bay, and their stories and relationships and growth over the years have been lovely to witness. Except that I get sea sick, I would love to live in a boat over by Sanibel Island, FL. Highly recommend. Start with the first one though, and read them in order.
Read more
Helpful
Report abuse

Tim Newton
5.0 out of 5 stars Required Reading
Reviewed in the United States on December 26, 2018
Verified Purchase
I started the Doc Ford series some years ago, but started in the middle. I wish I had read this book earlier! It gives a lot of background, in Randy's sneaky way, regarding the character of Doc Ford and Tomlinson. It filled in a lot of blanks for me. I enjoyed the drama and the fullness of the characters.
Read more
4 people found this helpful
Helpful
Report abuse

Amazon Customer
4.0 out of 5 stars One of the best Doc Ford reads there is out there.
Reviewed in the United States on June 16, 2021
Verified Purchase
As in the case of his previous books, Randy Wayne White delivers the reader straight into the heart of the South Florida lifestyle. The book is packed with action, twisty plot turns, and truly uniquely Florida characters. Reading the book, I felt as though I could taste the saltwater in the air, smell the unique scents of Havana, and see Doc Ford save the day once again. Randy Wayne White is a must read for anyone into mystery and action novels.
Read more
Helpful
Report abuse

Tom G
4.0 out of 5 stars Good read but lost a bit of steam at the end
Reviewed in the United States on January 5, 2014
Verified Purchase
Another fine read by Randy Wayne White but at the end it seemed to lose steam and ended rather abruptly. I was expecting more of a finish after such a good job leading up to the showdown at the lagoon. I also noticed a slight change in White’s delivery from prior works that I felt to be a bit awkward when leading into character dialog. It may be nit but I would rather read - I stated, “Let’s go.” in place of - Stated, “Let’s go.” It disrupted the flow and it occurred in several places. With that said I highly enjoy the creativity of the writer and the Doc Ford series. I will continue to read this author as he is one of my top five favorite writers. Maybe it is because of the Florida tie-in as three of the top five write about the state.
Read more
3 people found this helpful
Helpful
Report abuse

C. Maske
5.0 out of 5 stars An Engaging Adventure
Reviewed in the United States on October 19, 2021
Verified Purchase
Hard to put down! A great read for anyone but especially for the fans of Doc Ford. Wonderful insight into Cuba and the ravages Castro has rained down on that island. Great characters and it's a damn good story too!
Read more
Helpful
Report abuse

Cynthia Townley
4.0 out of 5 stars The Mysterious Doc Ford
Reviewed in the United States on April 2, 2021
Verified Purchase
Randy Wayne White is one of my favorite authors, I loved his Hannah series. “North of Havana” was a little slow in parts but had a great ending. I’m looking forward to the rest of the series.
Read more
Helpful
Report abuse

Elaine Checkley
5.0 out of 5 stars LOVE ME SOME DOC FORD!!
Reviewed in the United States on March 19, 2014
Verified Purchase
I found this series by accident and LOVED the first book so much I have bought the entire series on audio (there are a couple of the books that are no longer available that way, so I had to break down and read a book) but Doc Ford is just the bee's knees and I love the adventures and details to life on Sanibel Island. Sanibel Island is a real place and RWW draws on his experiences as a fishing guide to write the stories. I have a friend who lives in Florida and vacations there and there is a Doc Ford Restaurant there with great seafood (so he tells me) and kind of a Doc Ford fan club. I hope and pray the stories never end.
Read more
2 people found this helpful
Helpful
Report abuse

KDV
5.0 out of 5 stars Another solid Doc Ford story
Reviewed in the United States on July 25, 2020
Verified Purchase
This is an excellent series. As the title says, this is nearly all in Cuba, and you learn a lot about Cuba and the Castro years. I really enjoyed it. If you can, read the series (26) in order.
Read more
Helpful
Report abuse
See all reviews
Back to top
Get to Know Us
Make Money with Us
Amazon Payment Products
Let Us Help You
EnglishChoose a language for shopping. United StatesChoose a country/region for shopping.
© 1996-2021, Amazon.com, Inc. or its affiliates