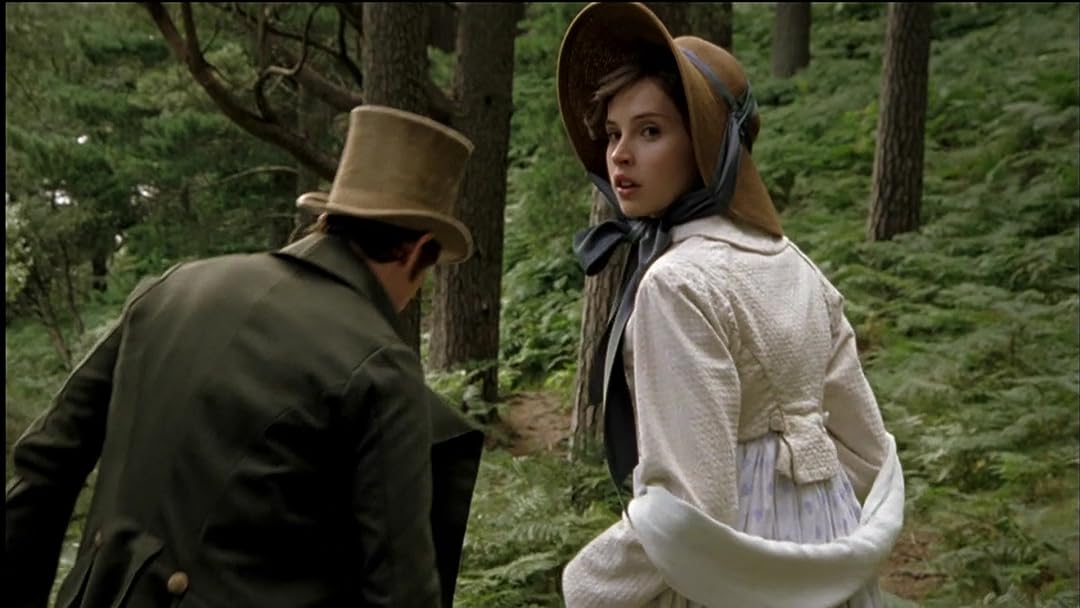 (2,821)
7.21 h 32 min2007PG
Felicity Jones (Rogue One: A Star Wars Story) is romance addict Catherine Morland in Jane Austen’s parody of gothic fiction. A budding romance is mysteriously cut short at a medieval country house that appeals to her most lurid fantasies.

Charlotte B.Reviewed in the United States on January 3, 2018
5.0 out of 5 stars
Great Adaptation though Masterpieces's version has cut scenes
Verified purchase
This adaptation is excellent, though admittedly dated looking. But JJ Feild as Henry Tilney is pitch perfect and Felicity Jones is exactly what I pictured when I read the novel. They have great effervescent chemistry together.
Warning though: this is PBS Masterpiece's edition, which has about 10-15 minutes LESS footage than the original BBC version. You can purchase the original on Amazon's UK site for a very reasonable price, but you'll need an all-region DVD player to view it. None of the cut scenes are particularly crucial, but, they do build on the affection and humor between Tilney and Catherine. I'm very suspect of all PBS releases of British dramas and films now. If you love British films and TV programs, an inexpensive all-region DVD player is a good investment so you can watch them as they were meant to be seen.
111 people found this helpful

S. GilmerReviewed in the United States on December 11, 2017
2.0 out of 5 stars
Cuts not appreciated
Verified purchase
My problem is not with the adapdation but this DVD. Let me explain, this is my favorite adaptation of Northanger Abbey I have seen it many times, that is why I ordered it. So imagine my disappointment when I realized certain scenes were cut from this DVD. I even went back to amazon to see if there was an unedited version or even if another customer noticed this. I will keep the DVD but it cuts down on my enjoyment because having seen it many times I'm expecting a scene and it's not there cut. Don't know why they did it because it dosen't really improve or cut down running time. I guess they figure no one would notice and it looks like no one really did but I can't be the only one.
92 people found this helpful

AmandaReviewed in the United States on November 3, 2020
4.0 out of 5 stars
Took off a star for PBS cuts
Verified purchase
Shame on you, PBS. Why are you constantly doing this to your fans? I have been supporting you since the days of Alistair Cooke but I am seriously rethinking it over your insistence on dumbing down your programs. First Downton Abbey (they think we're too stupid to understand entails and apparently they don't want us to understand Carson's fondness for Mary) and now I find out there are missing scenes from one of my favorite Austen adaptations. Why don't you trust your viewers?
The movie, aside from the missing content, is 5 stars all the way. Wonderful cast, beautiful production: costumes, locations, set dressing, lighting, cinematography, sound, all of it top notch!
19 people found this helpful

Alyssa A. LappenReviewed in the United States on November 30, 2017
5.0 out of 5 stars
Sublime Austen parody of Gothic novels
Verified purchase
I'd never read this Jane Austen classic, and when I noticed its availability on Amazon's PBS Masterpiece channel subscription, I grabbed it.

In response to those who rated this poorly, this is a parody of Gothic fiction, was written as such, and is doubtless true to the Jane Austen original, as the characters, plot line and outcome all ring true to Austen's brilliant and classic form.

But a parody is a parody. That is, as the dictionary describes it, "imitation of the style of a particular writer, artist, or genre with deliberate exaggeration for comic effect."

The relevant synonyms include: satire, burlesque, lampoon, pastiche, imitation, mockery. Austen did all of these in this work, at least as this delightful Granada and WGBH Boston co-production depicts the work in video form.

Taking into account the comical intent, and delightful effect, this is an altogether sublime production, which I recommend heartily. Thanks to Amazon's PBS Masterpiece channel subscription for making it available at no added cost!

Jen KReviewed in the United States on December 10, 2014
5.0 out of 5 stars
Blu-Ray has the original, uncut version of NA.
Verified purchase
This is the more enjoyable adaptation of Northanger Abbey (of the two on film) and definitely the best of ITV's slapdash "Jane Austen Season" from 2007. It's a shame they wouldn't finance its filming in Bath, and sad they couldn't trust us or find a way to show how, tongue in cheek, Austen shows Catherine as making perfectly reasonable, rational assumptions - for the most part - and, instead, make her out to be the susceptible, teenaged idiot the book is lightly mocking. Notwithstanding being forced to portray Henry as actually being angry with Catherine when she makes her giant mistake (?!?), JJ Feild is perfectly charming as the teasing Tilney. Both Felicity Jones and Carey Mulligan are well-cast and incandescent. Sylvestra Le Touzel (1983's Mansfield Park's Fanny Price!) does a wonderful turn as the empty-headed but fashionable Mrs. Allen.

It took me ages to find a Blu-Ray player to test the "Original UK Broadcast" claim, but I am thrilled that they've restored all the dream sequences and walk-and-talks on Beechen Cliff. I enjoyed it, but I know it's a matter of taste whether one likes the tone of this production or the fact that they substituted one terrible gothic novel for another. Just try not to be shocked that a fairly sheltered 17-year-old girl, thrust into the middle of a big party town, should discover the wonders of boys and occasionally have fantastical thoughts about them. It's written by Andrew Davies, who's famous for never failing to remind people that there is indeed sex in Austen. Be glad he only got to do this much. It probably could have been a lot worse.
60 people found this helpful

K. WardReviewed in the United States on May 7, 2016
5.0 out of 5 stars
Jane Austin's satyrical comedy done right.
Verified purchase
This is my favorite version- thus far- of this story I have ever found. I think they have great interactions and chemistry, the sound is good so you can comprehend quickly and easily what is going on. (Necessity for these types of films- so kudos. So many times good acting is lost to incomplete sound.) I liked the story while reading, but this is the only one (i.m.h.o.) that portrays it properly. All the others I have seen are sadly either annoying(bad chemistry), or lost to sound complications/ issues, or just made way to serious (the music perhaps?).
11 people found this helpful

Rizzol Reviewed in the United States on September 10, 2020
5.0 out of 5 stars
Loved!
Verified purchase
If you love Jane Austen, you’ll love this movie. I also love JJ Feild. *swoon* If you love him too, check out the movie Austenland (double swoon). This was a great movie. The heroine has a wild imagination which I can relate to. It’s a romance of course (definitely a “chick flick”) with a tiny bit of a mystery feel to it. I give 5 stars plus 5 hearts. ♥️ ♥️♥️♥️♥️
See all reviews
Back to top
Get to Know Us
Make Money with Us
Amazon Payment Products
Let Us Help You
EnglishChoose a language for shopping. United StatesChoose a country/region for shopping.
© 1996-2022, Amazon.com, Inc. or its affiliates