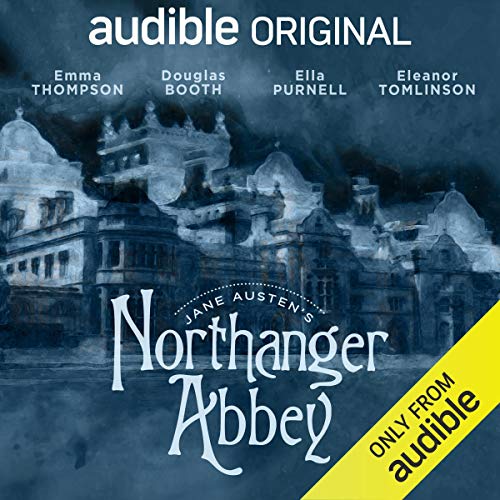 A coming-of-age tale for the young and naïve 17-year-old Catherine Morland, Northanger Abbey takes a decidedly comical look at themes of class, family, love and literature. Revelling in the sensationalist - and extremely popular - Gothic fiction of her day, the story follows Catherine out of Bath to the lofty manor of the Tilneys, where her overactive imagination gets to work constructing an absurd and melodramatic explanation for the death of Mrs Tilney, which threatens to jeopardise her newly forged friendships.

Enjoy this audiobook free + more
Learn more about Membership
List Price: $21.31
You Save: $6.36 (30%)
By completing your purchase, you agree to Audible’s Conditions Of Use
Sold and delivered by Audible, an Amazon company
Share

4.0 out of 5 stars
4 out of 5
20 global ratings
How customer reviews and ratings work

REBECCA THOMPSON
5.0 out of 5 stars Wonderful voices/acting. Brings it to life.
Reviewed in the United States on September 20, 2021
Verified Purchase
I am super particular about readers of Jane Austen's books. I have tried to find the best narrators and this is wonderful!! I feel all her books should be read by England's English and not by Amercian English narrators and this one has wonderful readers/actors. Love it!!!!!
Read more
One person found this helpful
Helpful
Report abuse

Maria
2.0 out of 5 stars This is not what I looking for
Reviewed in the United States on December 6, 2020
Verified Purchase
Unfortunately, this is not at all what I was looking for. I need the full narrated text of the novel, and it turned out to be a staging.
Read more
Helpful
Report abuse

momof5
5.0 out of 5 stars Great Story
Reviewed in the United States on January 20, 2018
Verified Purchase
The story had me hooked. I'm ready to listen again!
Read more
One person found this helpful
Helpful
Report abuse

CheeryToes
VINE VOICE
4.0 out of 5 stars The sound needs work - I couldn't hear some of the actors very well
Reviewed in the United States on December 17, 2017
Verified Purchase
I enjoyed this "radio" play. Emma Thompson is a terrific narrator. The sound needed work as some of the actors were hard to hear so I had to keep adjusting the sound, whether it was playing on the radio in the car (from my phone) or on my Echo. I wouldn't discourage you from buying it for that reason though. I truly enjoyed it. The one star off is for the sound.
Read more
2 people found this helpful
Helpful
Report abuse

Gloria Thomas
3.0 out of 5 stars Three Stars
Reviewed in the United States on November 23, 2017
Verified Purchase
I wasn't a big fan of the ending. There just wasn't a real hero ending.
Read more
One person found this helpful
Helpful
Report abuse
See all reviews