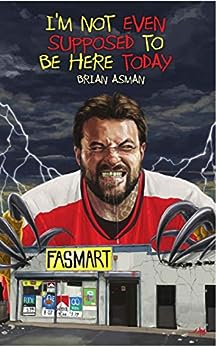 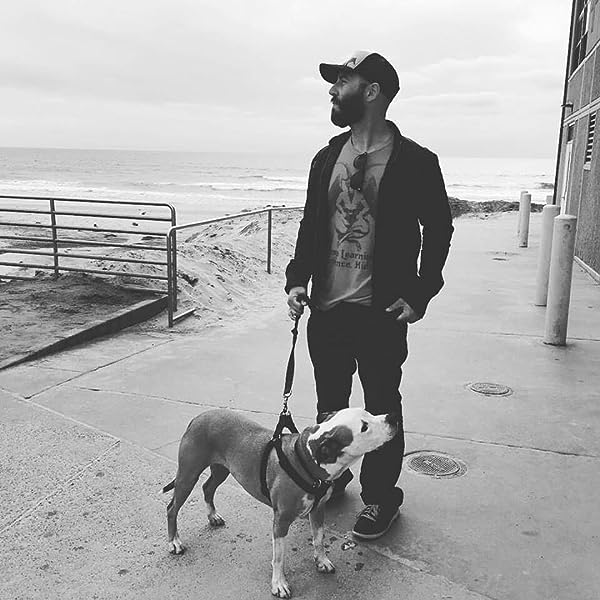 I'm Not Even Supposed to Be Here Today Kindle Edition

by Brian Asman (Author) Format: Kindle Edition
See all formats and editions
Sorry, there was a problem loading this page. Try again.
"Sometimes you stop by the convenience store for a slushy and the world just goes straight to hell, and takes you along with it. I haven't had this much fun watching terrible stuff happen in a long time." -Stephen Graham Jones, author of Mongrels

After a killer surf session, Scot Kring stops into his local Fasmart for a delicious, icy Slushpuppy. But before he can leave, a homeless guy outside has a stroke and accidentally recites an ancient Latin phrase that summons a very hungry demon, who just so happens to look like filmmaker Kevin Smith.

Now Scot's stuck in a time loop along with the other occupants of the convenience store who may or may not be demonically possessed and he's fighting back with nothing but a fistful of greasy hot dogs and a souvenir Slushpuppy cup as the giant menacing kaiju Kevin Smith threatens to kill them all.

I'm Not Even Supposed to Be Here Today is a demon apocalypse comedy for the slacker generation.
Read more
Previous page
Next page

Brian Asman is the author of I'm Not Even Supposed to Be Here Today from Eraserhead Press, Jailbroke, Nunchuck City, and Man, F*ck This House from Mutated Media. He's recently published short stories in the anthologies Breaking Bizarro, Welcome to the Splatter Club, and Lost Films, and edited the parody anthology Boinking Bizarro. He also writes comics for the anthology series Tales of Horrorgasm.

Based in San Diego, he has an MFA from UCR-Palm Desert and a Halloween VI: The Curse of Michael Myers tattoo. He's represented by Dunham Literary, Inc. Max Booth III is his hype man.

Amazon Customer
5.0 out of 5 stars Pure Entertainment!
Reviewed in the United States on May 20, 2019
I haven't enjoyed bizarro fiction like this since Jeff Burk's Shatnerquake! A fun, fast read filled with pop culture references originating from the world of Kevin Smith. Brian Asman has a talent for writing good, believable, and engaging dialogue.
Images in this review

Ani
4.0 out of 5 stars A Recipe for Carnage and Comedy
Reviewed in the United States 🇺🇸 on April 20, 2020
Verified Purchase
Take a half cup of Clerks, a tablespoon of Ghostbusters, a pinch of Ash v. Evil Dead, and a dash Dead Alive, and you get this snarky sendup of contemporary horror classics. Set in a “Fastmart” convenience store, our hero, Scot, is left to literally face his demons on what should have been one of the best days of his life. What sets this novella apart are the unique descriptions of the carnage that unfolds as Scot tries to gain his bearings in the face of a heinous but familiar nemesis: “The strange topography of its flesh, a patchwork of scale and chitin and wiry fur, called to mind a Frankenstein’s monster assembled in the trophy room of some laudanum-addled Victorian-era great white hunter.” Even those not usually in the mood for blood thirsty demons will appreciate this work for its ability to paint a picture that’s gruesome without losing its sense of humor.
Read more
One person found this helpful
Helpful
Report abuse

Homertax
5.0 out of 5 stars What if Bill and Ted brought Bruce Campbell's Army of Darkness to San Dimas?
Reviewed in the United States 🇺🇸 on August 6, 2019
Verified Purchase
This book pretty much answers that kind of question. The setting is wonderfully present-yet-nostalgic, the scene is vivid and the gore is prolific. This is a great and entertaining read for anyone who's

Worked a mundane retail job
Lived in a beach community (on any coast or shore)
Run afoul of the occult
Enjoyed Kevin Smith movies
Grew up in, remember, or wish you had been there for the 90's
Visited a convenience store

Jen
5.0 out of 5 stars Good book
Reviewed in the United States 🇺🇸 on December 31, 2020
Verified Purchase
Good book. Fun short read. Not as much Kevin Smith as I expected. But creative and fun!
Read more
2 people found this helpful
Helpful
Report abuse

Kindle Customer
3.0 out of 5 stars Quick / Fun Read
Reviewed in the United States 🇺🇸 on March 21, 2019
Verified Purchase
I remember seeing Clerks back in the mid 90’s for the first time, and saying to myself “That quiet fat dude should have been played by a demon!”

Jaclyn Stecker
5.0 out of 5 stars Loved it
Reviewed in the United States 🇺🇸 on May 5, 2019
Verified Purchase
Smart and fun! I couldn’t put it down once I started, I laughed out loud more than a few times and absolutely loved the concept. Asman has a true talent for captivating the audience in just a few sentences.
Read more
One person found this helpful
Helpful
Report abuse

Joshua Malkin
5.0 out of 5 stars Unlike anything I've read...
Reviewed in the United States 🇺🇸 on March 10, 2019
Verified Purchase
A compliment though, truly. Incredibly funny, fast, and unpredictable. The kind of 'ride' I'll undoubtedly want to take again, too.
Read more
One person found this helpful
Helpful
Report abuse

Ms. Mamatas
5.0 out of 5 stars Fun!
Reviewed in the United States 🇺🇸 on April 26, 2019
Verified Purchase
It was a fast fun read!
Read more
One person found this helpful
Helpful
Report abuse
See all reviews

Thomas Joyce
5.0 out of 5 stars Thoroughly entertaining
Reviewed in the United Kingdom 🇬🇧 on May 13, 2020
Verified Purchase
What else would you expect from a book with this crazy cover and synopsis? And he does it so well, bringing together a crazy story line, funny characters and some gory details. There are even some great references to Kevin Smith and his work as well. Not that he hits us over the head with them; they are just enough to convey a fan's true love for the work. And some of the funny dialogue and interactions between characters would be right at home in a View Askewniverse movie. Thoroughly entertaining.
Read more
Report abuse
See all reviews
Report an issue
Does this item contain inappropriate content?
Report
Do you believe that this item violates a copyright?
Report
Does this item contain quality or formatting issues?
Report