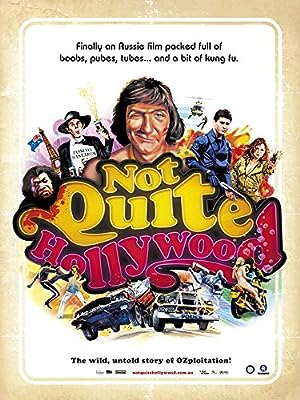 J. BradleyReviewed in the United States on August 21, 2021
5.0 out of 5 stars
Every bit the edition to get!
Verified purchase
I got the DVD edition of this documentary back after the theatrical run in the late '00s.
It's a great overview of "Ozploitation", as I was only familiar with it from the Mad Max movies, but this movie enlightened me to an entire era that THAT movie was only the tip of.
THIS new edition ads to the movie a plethora of extras, features, trailers - that really make this like a box set and even MORE of an overview of that era of international cinema. If Out of Hollywood fascinated you as to that movie genre and era, THIS new edition will engage you even more.

Allen Garfield's #1 fan.Reviewed in the United States on March 8, 2019
5.0 out of 5 stars
From the director of Machete Maidens and...
Verified purchase
... Electric Boogaloo (Golum-Globus/Cannon doc.) Mark Hartley is proving to be the best documentarion of obscure, overlooked and (ahem) underdocumented films and their makers, as well as the culture(s) that produces them. This disc loaded with bonus material! The aforementioned docs are available on Amazon - highly recommend! This being said: the feature will not play! The extras, no problems... go figure. Ugh. This review is for Australia's Umbrella Films - always something with them. I had to buy the domestic (US) DVD for the actual film - worth it, though.
2 people found this helpful

Adam FrazierReviewed in the United States on February 28, 2015
5.0 out of 5 stars
Ozploitation Excellence
Verified purchase
Filmmaker Mark Hartley explores Australia's hidden genre in this documentary that casually casts aside "official" film history to celebrate the demented genius of director Brian Trenchard-Smith, and the exciting wave of little-known but supremely entertaining films that entertained adventurous Australian filmgoers throughout the 1970s and '80s. Every film student worth his or her weight in celluloid has seen Breaker Morant and Picnic at Hanging Rock, but what about the lesser-known gems that didn't make the film-school textbooks? In his forward to Tim Lucas' book Mario Bava: All the Colors of the Dark, director Martin Scorsese states, "We have to keep resisting the idea of official film history, a stately procession of 'important works' that leaves some of the most exciting films and filmmakers tucked away in the shadows." In this documentary, director Hartley explores the films forgotten by "official film history" with the comprehensive eye of a true film buff. As a child watching such films as Snapshot and The Man from Hong Kong, Hartley immediately recognized how wildly disparate they were in tone and execution from the films that comprised Australia's traditional film library. Appearing like American genre films that just happened to be shot in Australia and cast with Australian actors, these so-called "Ozploitation" flicks flourished in the wake of relaxed censorship laws down under. Yet despite constant chatter about the "new wave" of Australian cinema, financially successful films like The Man from Hong Kong and Patrick that were popular both at home and abroad were never mentioned, sneeringly dismissed as "genre" films rather than Australian films. Perhaps in the wake of such successful Australian films as Wolf Creek and Undead -- and looking ahead to such films as the slasher shocker Storm Warning and the eagerly anticipated remake of Long Weekend -- curious filmgoers are finally prepared to discover what they've been missing all these years. ~ Jason Buchanan, Rovi
6 people found this helpful

deadringer22000Reviewed in the United States on February 10, 2017
5.0 out of 5 stars
Cool and interesting
Verified purchase
Very fun, funny, and entertaining documentary of exploitation Cinema in Australia in the 70's and 80's. Great interviews with almost everyone involved and some who were not. Worth it for anyone who has any interest in exploitation or Australian cinema.
2 people found this helpful

Unfortunately since the 150% tax deduction was killed films are now funded by Australian Governments through film boards and the vast majority is absolute unentertaining crap. There are some notable exceptions.

This is an insight into the wild old days, road chases filmed at 100 mile an hour with no traffic permits or safety officers on set...

I can't stand most Hollywood productions either, people who like B grade films should find this entertaining. Film students should also buy it, forget the rubbish they teach you about formula plots and Sigmund Freud. If you aren't out to wow your audience, be entertaining and really have a red hot go, you shouldn't be in film.

Reade CohenReviewed in the United States on February 4, 2020
5.0 out of 5 stars
Great Documentary
Verified purchase
Great documentary on the Australian movie industry. This film skims a lot of information and probably could have been 4 times as long in order to give more time to some of the more complex topics covered. That said, over all it's a good snapshot of 70s and 80s Australian film making.

rmains1Reviewed in the United States on December 10, 2020
1.0 out of 5 stars
um..."interesting" production
Verified purchase
I had to stop watching...there is annoying music under everything. It's disjointed and there is no cohesive "story" behind what the hell they're talking about. Don't waste your time.

Gerald McKayReviewed in the United States on November 18, 2020
2.0 out of 5 stars
Bad movies from an awful time
Verified purchase
Fifteen minutes of this documentary just made me wish I could go back to not knowing anything at all about this topic.
See all reviews
Back to top
Get to Know Us
Make Money with Us
Amazon Payment Products
Let Us Help You
EnglishChoose a language for shopping. United StatesChoose a country/region for shopping.
© 1996-2021, Amazon.com, Inc. or its affiliates