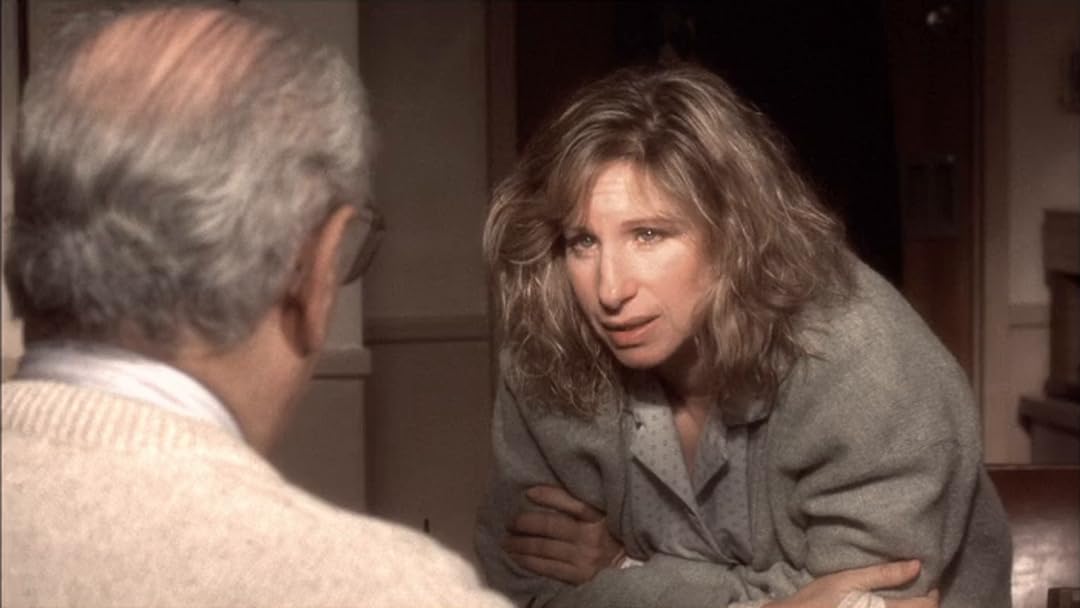 (1,274)
6.61 h 55 min1987R
Barbara Streisand portrays a strong-willed, high-priced call girl launches a fierce battle to prove her mental competence with the help of her appointed attorney.

Amazon CustomerReviewed in the United States on June 25, 2018
5.0 out of 5 stars
Dark Secrets
Verified purchase
Barbra Streisand is a hooker, discrete and selective. She has never been incarcerated. But she meets a wrong client. He wants a tub bath with her and she has another engagement. There is a struggle and man is killed. Now Streisand is in jail and a mental ward for the crime. She is very cantankerous and uncontrollable in court. She was given a poor mental assessment and will not allow another shrink test her again. She must prove she is competent to stand trial for her crime instead of mental disturbed. Richard Dreyfus is her court appointed attorney. He figures out there are dark secrets in the family and confronts Streisand on the witness chair. The movie is compelling and very much with viewing.
6 people found this helpful

Judy DReviewed in the United States on March 15, 2021
5.0 out of 5 stars
Should have had better marketing at theaters
Verified purchase
I think this is a great Barbra movie. No singing, but she delivers a fantastic portrayal of an Incest Survivor. Richard Dryfuss turned in a great performance as Barbra's Defense Attorney. This movie, while not getting deep into the trauma of incest, shows the down side and showed the gritty side and how families can be destroyed. Well worth watching.
2 people found this helpful

Kindle Customer Mary Ann GreenleyReviewed in the United States on October 5, 2010
5.0 out of 5 stars
On my "A" list ! Barbra is one of my favorite performers !
Verified purchase
In this particular film, I was so thoroughly entertained and realized the scope and depth of the damage that a step parent can inflict on a vulnerable child. The consequences of the sexual abuse was the exact cause of how Barbra portrayed the character. This is an excellent example of what happens when this abuse is inflicted on a child. They are taught by the pedophile how to please and usually become very amorous, as a result of what they are taught.

The scope of the damage can and will cause the abused child to "act out" and the impact of what the abuser has done to the child can never be erased and/or disappear. It is the "best kept secret" in our society. The shame and guilt the child hides is something that haunts them the rest of their lives.

Barbra, in this film, portrayed the character perfectly and demonstrated the exact damage that occurred and how she re-acted to it, Richard, as her attorney, did a fabulous portrayal of a very savvy father and with no help from Barbra's character, ascertained very quickly what happened to her and cleverly extracted the information out of Karl Malden and the truth came out in a very affective way.

Brilliant performances by every actor involved in the film and all seasoned veterans in the film industry. In my opinion, they all deserved Academy Awards for the characters they portrayed.

I recommend that this film can and should be used as an educational tool for children who have been abused so they can see that they are not alone in this twisted, toxic sickness that is so firmly implanted in our society.

Kudos and accolades to everytone that was involved in the making of this film.

DisneydadReviewed in the United States on October 9, 2016
5.0 out of 5 stars
It all about who finishes first
Verified purchase
A very dramatic and emotional role that Streisand handles well. I am not a fan of courtroom drama-I won't even watch most lawyer shows on TV. I saw this and being a Streisand fan I swallowed hard and watched. It was the most intense and involved performance I have even seen. Every bit of what I had expected or thought i wanted from Streisand was gone and replaced by this incredibly emotional and human character. I watched glued to the seat, and when it ended I didn't care that there was no singing (though as she walked down the street free from court in her hospital gown I'm sure there was potential for a ballad ).
6 people found this helpful

LindyReviewed in the United States on June 30, 2019
5.0 out of 5 stars
This shows Barbra's incredable acting range and it's a major hit!
Verified purchase
I first saw this movie at the theater and went back three more times! I was amazed at Barbra, as she doesn't sing in this movie, and her scenes are intense and raw. They're filled with the drama of the young girl of yesteryear trying to get all of her anger out. Yet, her parents seem to not pay attention, or listen.
Great supporting cast, however, it's Barbara that carries the whole show! Loved this movie!!!
3 people found this helpful

SusanReviewed in the United States on April 1, 2022
3.0 out of 5 stars
Barbra...please cut your fingernails!
Verified purchase
I love her singing. She's a treasure. But in this movie all you get is a brilliant callgirl that talks too fast and those nails don't need to be onstage with her! She drove me NUTS and I never finished watching because it started going off into what I think was going to be rape by father making her what she was.

samReviewed in the United States on December 6, 2020
5.0 out of 5 stars
One of her best...
Verified purchase
Kept me interested the whole time, no x rated material which is a blessing these days. I hate being surprised by some raunchy scene in the middle of an otherwise good movie. Waste of my time and offensive to good taste. This was an excellent movie.
One person found this helpful

C. AndrewsReviewed in the United States on October 19, 2008
5.0 out of 5 stars
Is she Nuts?
Verified purchase
I had seen this movie years ago & just loved it so I bought it. Barbra Streisand is great in this movie. Richard Dreyfuss as usual is awesome. Without spoiling the movie for anyone, I really can't go into great details about this movie other than if you are a big fan of Barbra Streisand & Richard Dreyfuss I highly recommend this movie. Barbra gives a great performance as "Claudia" a neurotic, insecure, emotional rich "Call Girl" who has been charged with Manslaughter in the death of one of her johns. No words for Richards performance because what can you say? It's Richard Dreyfuss. He does great in anything. He plays "Aaron Leveninski" from Legal Aid, her tough, humerous, agitated attorney who was forced to represent her by the judge. You do question her sanity, but during the course of the hearing you will learn a great many things about Claudia that will give you the insight of why she is nuts & why she is not nuts. You decide. No more information from me. Buy the movie, it's worth it.
5 people found this helpful
See all reviews
Back to top
Get to Know Us
Make Money with Us
Amazon Payment Products
Let Us Help You
EnglishChoose a language for shopping. United StatesChoose a country/region for shopping.
© 1996-2022, Amazon.com, Inc. or its affiliates