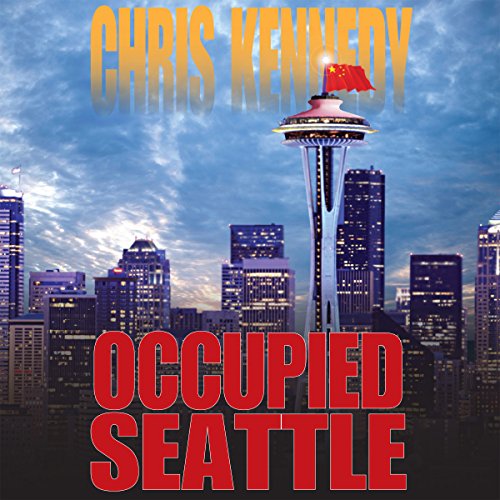 The Chinese have captured Seattle!

In 1949, the government of the Republic of China fled to the island of Taiwan. For nearly 70 years, mainland China wanted to take the island back and unite the nation under one flag, the Communist flag. Their desire was thwarted by US support for Taiwan, until the Chinese conceived and executed the perfect plan to keep the US out of the war for Taiwan, an invasion of Seattle!

Yesterday, China captured the cities of Seattle and Tacoma, Washington, in a Pearl Harbor-like surprise attack. The Chinese also captured six American nuclear warheads and are not afraid to use them on American soil, if necessary, to keep the United States out of the war in the Pacific.

Without US aid, the fall of Taiwan seems imminent, and now even Seattle seems lost to the Chinese. America's hopes are riding on a shot-down F-18 pilot, a retired Navy SEAL, and a platoon of Army Rangers. If that's all America has going for it, all hope seems lost!

Jimbo's Awesome SF/F Reviews
5.0 out of 5 stars Awesome Book
Reviewed in the United States on May 26, 2019
Verified Purchase
I like the way the plot works in this one. Speaking as a dude with a history degree who has done a lot of reading of military history, a lot of crap in war happens because something weird happens somewhere. Seriously, the mass bombing of London, and thereafter Germany, during World War Two happened because a German bomber got lost and jettisoned its bomb load over a civilian area (as opposed the the RAF base it was meant for). I seriously doubt that the Pentagon would plan to repel an invasion look anything like what happens in Occupied Seattle but the scenario contained in the book is actually believable.

Equally as important to the plot of Occupied Seattle is the old adage that no plan survives contact with the enemy. Contingency planning is a good thing, but the other guy gets a vote in how things go too. Neither side gets everything to go right, but the plot hinges on the small things that add up to big ones. It makes sense. War is a very human endeavor and things go wrong all the time. It's good to see a book that uses that very premise.

It's not my first time noting this, and I should probably be used to it by now, but it's always surprising to read a work written by a flyboy that does ground combat this well. The combat in Occupied Seattle is fast paced and frequent. This is the story of the US repelling a Chinese invasion of Seattle. There needs to be fighting. Kennedy does it well. I mean, Asbaran Solutions is still the best written ground combat I've read, but I think Kennedy will be okay with that, since he wrote Asbaran Solutions too. And that's saying something: I'm a huge Tom Kratman fan and he's a former infantry officer. I know good military fiction when I read it, and Kennedy has the technique down.

Of course, you'll get some sea and air combat as well. Kennedy does that superbly, but that's what he's experienced with in the real world, so it's kind of what I expected. That's not to say it was done well; far from it. I enjoyed those parts of the book immensely. I just knew that I would.

I love the characters in this book as well. Whether it's two twins trying to outdo each other, or a pilot running a ground unit, they're well thought out and make sense. No one is perfect, not even the members of the military in the book. I can think of one particular Master Chief that doesn't quite fit the stereotype too. That's okay. People are people and they don't always fit into neat little boxes.

The civilians in the book act right as well. Americans are not lemmings who would follow an invader to their own doom. They wouldn't take an invasion lying down and they don't. Oh,and of course the American citizenry has a high incidence of firearms ownership and a large number of veterans mixed in. Kennedy nails the attitude of the common man perfectly.

I remember taking a writing class in college and my professor informing me that I used too many characters. I also know I've read a ton of books that had and needed a Dramatis Personae in the back. Kennedy manages to avoid all of that. There are enough characters here to make the story work but not enough to create needless clutter.
Read more
Helpful
Report abuse

Kindle Customer
5.0 out of 5 stars Kennedy rides again, hooboy
Reviewed in the United States on April 25, 2022
Verified Purchase
Kennedy throws us curve after curve in the fight to reclaim Seattle, the Emerald City, from Chinese invaders. As Master Chief O'Leary, Too and the Rangers platoon led by shot down aviator Lt. "Calvin" Hobbs fight to secure nukes, rescue hostages and survive the thousands of PALA forces the rest of the world fights China's invasion of Taiwan. The seconds book is non stop action written in Kennedy's fast paced manner. Lots of fun!
Read more
Helpful
Report abuse

mikestmc
5.0 out of 5 stars An Almost PC Battle in Seattle
Reviewed in the United States on May 23, 2017
Verified Purchase
I started with the Four Horsemen novels and joined Chris's Red Shirt Brigade. Saw this novel and bought it to see where it would take me. A bit predictable but fun none the less. I was stationed in Bremerton so I was familiar with the area. I have already purchased and read the sequel. My point here is Chris Kennedy has developed a world and characters that make you want to read just to see what happens next. Pure escapism with some great insights into the military lifestyle and the usual bitches and gripes about senior officers and stupid policies designed to make everyone else's life and job miserable. As a retired enlisted person, this type of story appeals to me on so many different levels but above all, this is a damn good story to read.
Read more
Helpful
Report abuse

Kindle Customer G.J.Geracci
5.0 out of 5 stars I think I need to give this five more staRs!!!!
Reviewed in the United States on May 21, 2022
Verified Purchase
Best example of typical Americans when the chips are down. C'mon and write something about the Coast Guard spearheading a clandestine operation in a similar Russian/American scenario ???
Read more
Helpful
Report abuse

Amazon Customer
5.0 out of 5 stars Prophetic? Let's hope not. But required reading for war gamers.
Reviewed in the United States on May 17, 2014
Verified Purchase
Chris Kennedy's two books on the invasion and occupation of Seattle by China are not only plausible but the notion of invading and occupying American and Canadian cities along the Pacific Coast has long been a topic of discussion at the Academy of Military Science for the People's Republic of China. Kennedy's story concept has also been validated by recent news items such as this one:

That said, China is absolutely, admittedly, and undeniably preparing for war against the United States and Kennedy's books should serve as a warning much the same as General Billy Mitchell once warned of an aerial attack on Pearl Harbor by the forces of Japan. Only a fool would dismiss Kennedy's story as fanciful speculation.

The plots and subplots are well researched and well written and it's clear that Kennedy has either done detailed homework or he's visited the places in the two stories in the Occupied Seattle series.

One more thing: The vast majority of the books I buy get donated to charity or given away after I finish them. Kennedy's books will join my Tom Clancy collection as books I will read and read again.
Read more
4 people found this helpful
Helpful
Report abuse

John Taylor
5.0 out of 5 stars AN OUTSTANDING SERIES
Reviewed in the United States on May 4, 2016
Verified Purchase
The two great books of this series stand head and shoulders above any like books I have read. The plot was believable,well developed, the characters were interesting, and the series had a good amount of humor. The author should be commended for his work.

I hope that their is a sequel in the works, following the same series of characters.

Amazonian God
5.0 out of 5 stars Literary Crack
Reviewed in the United States on May 10, 2017
Verified Purchase
You'll be hooked from beginning to end, it's like crack in book form. While a little rough around the edges, you won't care because the story is that engrossing. This is clearly an early work of author Chris Kennedy, because I've seen his Asbaran Solutions and it's written much better. Either way, this is a win for us and should be a movie!!
Read more
Helpful
Report abuse

Marcus Ramirez
5.0 out of 5 stars Fantastic!
Reviewed in the United States on May 1, 2020
Verified Purchase
Great characters, fast paced, A book not to be missed. The perfect end to the series that started it all.
Read more
Helpful
Report abuse
See all reviews

C Jennings
5.0 out of 5 stars Enjoyable yarn
Reviewed in the United Kingdom on June 1, 2022
Verified Purchase
Good story, fast paced, and a surprising amount of detail regarding vehicles and weapons. I enjoyed it and would recommend reading the two book series.
Read more
Report abuse

Kindle Customer
5.0 out of 5 stars The Battle Tirns
Reviewed in Canada on May 25, 2020
Verified Purchase
Having been outwitted and outfought for most of the first book, it was time things to go right for our heroes. Lots of action, bravado and daring do. A fun read.
Read more
Report abuse
See all reviews