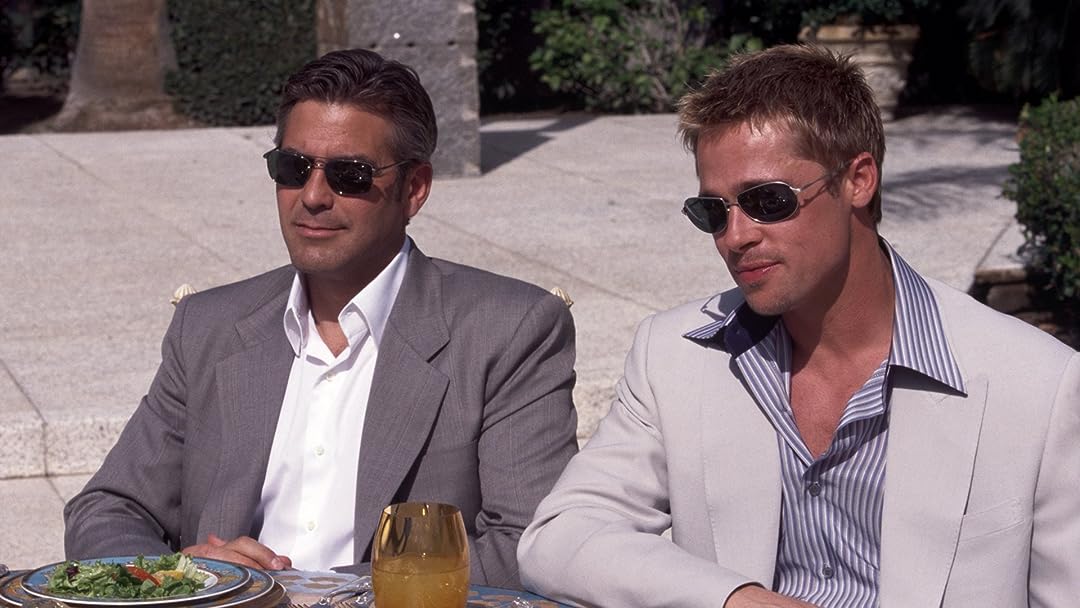 (11,173)
7.71 h 56 min20017+
Dapper Danny Ocean (George Clooney) is a man of action. Less than 24 hours into his parole from a New Jersey penitentiary, the wry, charismatic thief is already rolling out his next plan. Following three rules: Don't hurt anybody, don't steal from anyone who doesn't deserve it, and play the game like you've got nothing to lose. Danny orchestrates the most sophisticated, elaborate casino heist in h

joel wingReviewed in the United States on August 24, 2020
4.0 out of 5 stars
Set a new standard for heist films
Verified purchase
Ocean’s Eleven was director Steven Soderbergh’s interpretation of the classic 1960s heist film. Previously he’d done Out of Sight with George Clooney which really set his style and look for the whole Ocean’s franchise. That featured very smart characters, witty dialogue, a plot with a twist, strong color tones, and a very good instrumental soundtrack. All of these elements were used in Ocean’s Eleven which had a large ensemble cast of Clooney, Brad Pitt, Bernie Mac, Elliot Gould, Matt Damon, Carl Reiner, Casey Affleck, Scott Caan, Eddie Jemison, Don Cheadle, Shaobo Qin, Andy Garcia and Julia Roberts. The plan was to rob three Las Vegas casinos simultaneously but Danny Ocean (Clooney) had an ulterior motive. Could he pull off the job and accomplish his goal?

The movie can in three main acts. The first was assembling the team for the job. Obviously this would take eleven people, hence the title. Each one had a different job such as being a thief, doing impersonations, handling the technical aspects, collecting intelligence, etc. Act two was the preparations. For instance Saul (Reiner) played a wealthy arms dealer who would gain access to the combined vault of the three casinos. They follow around the casino owner Terry Benedict (Garcia) because they have to know his routine so that they can pick pocket him and steal the security codes to the facilities. The last act was the actual heist which was the result of some ingenious writing. There were so many elements and the twist was quite amazing. It was so good it made you think about what you just saw.

Along the way there are plenty of memorable moments as well. At the start Rusty (Pitt) is teaching movie stars how to play poker. One says he has three pairs, which Rusty says is impossible because he only has five cards. Then another says he wins the hand because he has all red cards. You can imagine the look on Rusty’s face. Another time Basher (Cheadle) gets nabbed for robbing a bank. Rusty poses as police officer, rescues him, and they make their getaway by setting off a bomb inside a cop car.

Overall, Ocean’s Eleven went down as a highly enjoyable film. The characters were appealing. The story is great. It all makes for a top notch heist flick.
C

Christina ReynoldsReviewed in the United States on October 18, 2020
5.0 out of 5 stars
Sleek, Smart, and Perhaps even better than the original
Verified purchase
My rating is more f a 4.5.
Thanks for reading in advance

Considering the cast of this film, one particular challenge is balancing the gravity the various actors have on the plot at hand. ‘Ocean’s Eleven’ Rises to the occasion as a brilliant combination of skills we expect certain actors to have and others that come as a surprise. Clooney and Pitt are their usual selves with their tempestuous suave and irresistible charm. Matt Damon is a meticulous combination of audaciously intelligent and deceptive as needed. Don Cheadle is explosive and at times erratic - his voice acting in particular is impressive in this film. I could go on and on, but I think my point here is made: the performances alone makes this a must-watch.

Given the amount of characters that contribute to the overarching plot, the gravity of each person's goal is given enough screen time to justify their inclusion in the first place. There is a clear understanding of what skills each person has that makes them Irreplaceable, and with their skills comes a defined tone that dominates the scenes they are present in. Characters given less screen time overall are shown to have skills we would consider to be technical (such as acrobatic, dealing with technological intellect, and the like). Those given more screen time have a more polished set of what we would call “people skills” and are masters of making others behave in the way that they want them to. By the time we arrive to the conclusion the significance of each person's contribution is appropriately represented and makes for a story that feels truly conclusive and cohesive.

This really isn't so much a complaint as it is commentary, but the nature in which the plot seems to come to fruition with very little turbulence seems a little one-noted. There are moments here and there where it seems like their heist could be thwarted, and without giving too much away all I can say is even those moments are somehow represented as having been planned for in the first place. On one hand, this does show that these characters have taken their mission seriously and have taken a lot of the possibilities of things that could happen into consideration. On the other hand, however, this lends them very few opportunities to truly “think on their feet” as I can only guess people in this situation have to be good at doing. The addition of these scenes - even if they were very short and introduced conflict that was easily resolved - would have added an extra layer of authenticity to the characters being seen on screen

When compared to the movie This Is a remake of ( the original coming having came in 1960) this version is praised for providing better clarity of the separate motivation certain characters have. In addition to this, the remake also gives the supporting characters more leverage and opportunities to shine on their own.

Smart, sleek, and entertaining: I would highly recommend this movie!
2 people found this helpful

This is a great film for a Sunday afternoon. It's fun and light and visually stunning. Everyone is at their best and it seems like everyone enjoyed making it. Great film.
9 people found this helpful

Elliot H. Reviewed in the United States on September 12, 2019
5.0 out of 5 stars
Movie stars movie
Verified purchase
This movie is awesome! I love it! The cast, story, directing...all of it. This movie is stock full of movie stars and the audience knows it. Down from Clooney and Pitt's wardrobe to Julia Roberts and Andy Garcia. Andy Garcia is a classic, suave, smooth antagonist and plays it perfectly. I can't think of a bad thing about this movie. You could watch this repeatedly and still enjoy it. The dialogue is crisp, light and funny. Such a great ensemble and really kudos to Soderbergh to keep a cast like that together. The audio commentary with Pitt, Garcia and Damon is great too adding little pieces of trivia and insider knowledge to what it was like on set. You won't be disappointed.
3 people found this helpful

Mom who caresReviewed in the United States on July 22, 2019
1.0 out of 5 stars
Boring
Verified purchase
I think it was a blockbuster in its day for the cast. The cinematography was weird, the storyline was long and boring. The ending was predictable. I really don’t understand its popularity.
6 people found this helpful

Writers made outstanding work.
History is built around the robbery of three casinos. The jackpot should be more than $ 160,000,000. The film perfectly conveys the spirit of Las Vegas. If you have never been in Las Vegas, NV - this movie is for you. :)

Music is really nice. The compositions are so organically intertwined in the action of the movie that they create an unforgettable feelings.

There are number of starts - George Clooney, Brad Pitt, Julia Roberts, Andy Garcia, Matt Damon. Actors performed outstanding. It is team work. All of them so nice fitted together, that every scene is perceived naturally.
There are two cameos - heavyweight champions Lennox Lewis and Wladimir Klitschko.

Ocean's Eleven can be watched over and over again.
6 people found this helpful

Miz EssReviewed in the United States on December 24, 2020
4.0 out of 5 stars
Fun, great cast.
Verified purchase
This is a thoroughly enjoyable, comical and heist film with an improbable plot. Then again, aren't all heist pictures a bit over the top? The cast works well together and plays well off of each other. Bernie Mac is one of the highlights of this film and is sorely missed since his untimely passing. I recommend watching all of the Ocean films in order if you need a stress-relieving binge, although the sequels aren't as good as this first collaboration with Clooney, Pitt, Damon and co.

Jeff WilsonReviewed in the United States on August 29, 2016
4.0 out of 5 stars
Pure fun and energy from start to finish.
Verified purchase
I love all the Ocean's films (at least the 3 remakes), so I'm probably a bit biased. But they're pure fun, caper-y heist movies. The plots, while fantastical, are thoroughly enjoyable. Just don't think too much about them, as another reviewer pointed out. :)

Watching the banter between George Clooney and Brad Pitt is a real treat, they way they'll finish each others sentences, and make inside references to one another that make you go "What the hell are they talking about?" It really makes it feel like those two particular characters go way back, which strengthens the bond and makes the subplot with Tess a little more interesting.

Andy Garcia is great as the steely, unflappable Terry Benedict. You really get the sense of danger they're all facing by engaging in this heist.

The supporting cast is top-notch, watching them interact and mess with each other is another hidden joy within the movie. Bernie Mac, Don Cheadle (uncredited!), Carl Reiner, Eliot Gould, Casey Affleck, all the others - every one of them is perfectly suited for their given role, and they play them to the fullest.

David Holmes' soundtrack is *brilliant*, I hold it up against the likes of John Williams, Danny Elfman, and Hans Zimmer for how perfectly he crafted the musical story to match the action of the film.

If you're looking for a solid hour and a half of a fun (if a bit unrealistic) ride that definitely doesn't take itself too seriously, it doesn't get much better than this.
3 people found this helpful
See all reviews
Back to top
Get to Know Us
Make Money with Us
Amazon Payment Products
Let Us Help You
EnglishChoose a language for shopping. United StatesChoose a country/region for shopping.
© 1996-2022, Amazon.com, Inc. or its affiliates