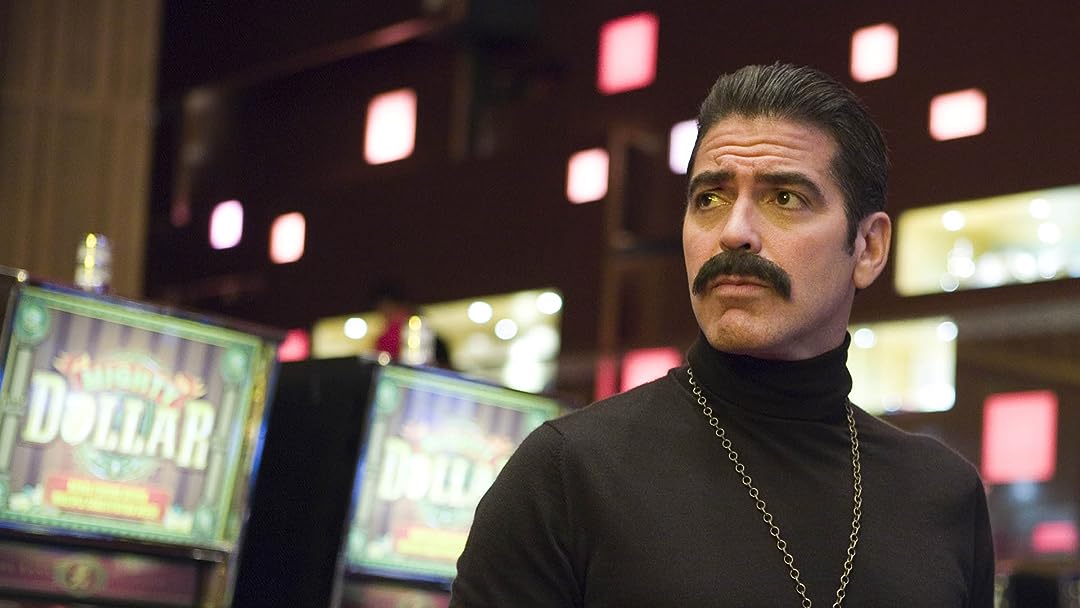 joel wingReviewed in the United States on August 25, 2020
4.0 out of 5 stars
Ocean and company have to teach a casino mogul a lesson
Verified purchase
After Ocean’s Twelve totally flopped Steven Soderbergh and company returned to their roots with Ocean’s Thirteen. The story revolves around Danny Ocean (George Clooney) and company teaching casino mogul Willy Bank (Al Pacino) a lesson in humility and honor. A man’s word is supposed to be bond but Bank only cared about manipulating people for his own ends. When that puts Reuben (Elliott Gould) in the hospital Ocean and his friends jump into action with another witty and complicated plot.

Part of the fun of the first movie was to see all the things the team had to do to carry out the job. They did that and more in Thirteen. Virgil (Casey Affleck) for instance got a job at a company in Mexico that made the dice at Bank’s casino. He even organized the workers and led a strike. Another time they set up a casino reviewer by infecting his room and food with all kinds of nasties.

Second the challenges in this job are the greatest the team has ever faced. For one, Bank installed an artificial intelligence security system. Two, Ocean and Rusty (Brad Pitt) couldn’t even think of all the schemes themselves and had to call in their friend Roman (Eddie Izzard) for help. Three, they didn’t have an exit strategy to end the strike against Bank’s casino. Coming up with the challenges and overcoming them were all part of the great writing employed in the film.

To top it all off they had another great soundtrack to provide the perfect music for each scene.

Ocean’s Eleven surprised you with the scheme. Thirteen had that and a lot more fun as well as you were rooting for Ocean and company to stick it to Bank.
C

Mr. MustacheReviewed in the United States on February 19, 2010
3.0 out of 5 stars
The series starts to stall.
Verified purchase
The first Oceans was next to perfect, great characters, comedy, interest, etc. The movie kept you there and watching without wondering or distraction. The second...12...left some people irriated the story was not as complex and relied more one characters to be the story as opposed to the "mission". I found the second...12 to be the better of the series for it was more enjoyable to in a sense witness the scene that was the relationships of the characters. The 3rd or 13 tries to return to the 11 type...but it is almost too big. Its still a good movie but it has so many stars and so much going on that the characters are lost...some don't even have lines...also the mission seems secondary...but to what? More famous actors that you'll say...hey there is X or there is X. It looses its wittiness and loses its appeal. Some scene in the 12 movie are longer but are validated by the sense of the meaning to the film in the first the snazzy cuts make the movie great paced. Here its almost a mashup of items. A ad for designer clothes and milfism. Its still good...but you'd be better to watch 11..then 12...and if you need the doggy bag grab 13.
3 people found this helpful

Kristina BrockReviewed in the United States on May 17, 2016
4.0 out of 5 stars
Good movie!
Verified purchase
Ocean's Thirteen was a good movie to watch. My husband is very much into spy movies and heist movies and this made for a fun movie night. While not necessarily what I would have picked it still was engrossing and thought provoking. George Clooney is a great actor and he manages to convince me he could really pull off all three heists at once. I won't give any spoilers but it is worth a look even if this genre isn't in your normal playlist.
10 people found this helpful

J. CoursReviewed in the United States on December 2, 2013
3.0 out of 5 stars
A Caper Film With a Few Issues
Verified purchase
A good caper film has to bring the audience along. We might not understand why the characters did what they did until all becomes clear at the end, but part of the bargain is that it does become clear at the end. And that's one place Ocean's Thirteen falls a bit short. It assumes too much background from Eleven and, especially, Twelve. (If you don't recognize Francois Tolour, having the camera follow him without any sort of introduction won't make much sense). There are extraneous bits that muddy the waters. (Why did the building keep shaking? Why foment a lockout at the maquiladora?) And some important twists, such as the FBI agent's identity, lacked adequate foreshadowing.

I also found myself missing the tightly-written dialog from Eleven. The dialog in this film is serviceable, but in Eleven it sparkled.

Finally, some plot twists just weren't consistent with how we'd expect the characters to behave. For example, if Willy Bank is so ruthless--the film hints he's even more dangerous than Terry Benedict--would Danny Ocean really be so overt?

Overall: three stars. Better than the Rat Pack's Ocean's 11, but not up to the quality of the 2001 Ocean's Eleven.
5 people found this helpful

Lewis S.Reviewed in the United States on December 7, 2017
5.0 out of 5 stars
Good wrap up of a Great Trilogy
Verified purchase
If you have never seen any of the Ocean's movie's, you're missing out on some great movies! Definitely my favorite movie trilogy after the original Bourne series.
If you haven't already seen Ocean's Eleven or Twelve, check them out first though to get a feel of everything. Thirteen isn't quite as good as the first two, but it's still a good, and fun, wrap up.
As with any DVD you order online, check it right away to make sure it didn't come loose or scratched during shipping.
One person found this helpful

FortuñoReviewed in the United States on January 3, 2020
1.0 out of 5 stars
This DVD has reading errors
Verified purchase
I purchased this DVD to replace a prior DVD of the same movie (also purchased from Amazon) that got stuck mid-way into the movie, which I had attributed to a scratch. Much to my frustration the newly purchased DVD got stuck at the exact sample place. Skipping past the point where the DVD froze did not fix the problem (short fragments would play, but then the disk would freeze again). I see several other reviewers have experienced this same issue. Poor QC.

GJayReviewed in the United States on May 21, 2022
3.0 out of 5 stars
It just wasn’t the movie I thought it would be.
Verified purchase
The movie didn’t hold my interest. The cast brought back many memories of other movies I enjoyed in the past.

Amazon CustomerReviewed in the United States on April 3, 2021
1.0 out of 5 stars
Faulty merchandise
Verified purchase
I FINALLY got a chance to watch this movie much later after I ordered it, and at the end of the movie, the DVD messed up! I couldn't even see the end of the movie!! When I tried to get an exchange, 'the exchange time had expired'. I would have been satisfied with a replacement that was good to the end, Very disappointing and a total waste of money.
See all reviews
Back to top
Get to Know Us
Make Money with Us
Amazon Payment Products
Let Us Help You
EnglishChoose a language for shopping. United StatesChoose a country/region for shopping.
© 1996-2022, Amazon.com, Inc. or its affiliates