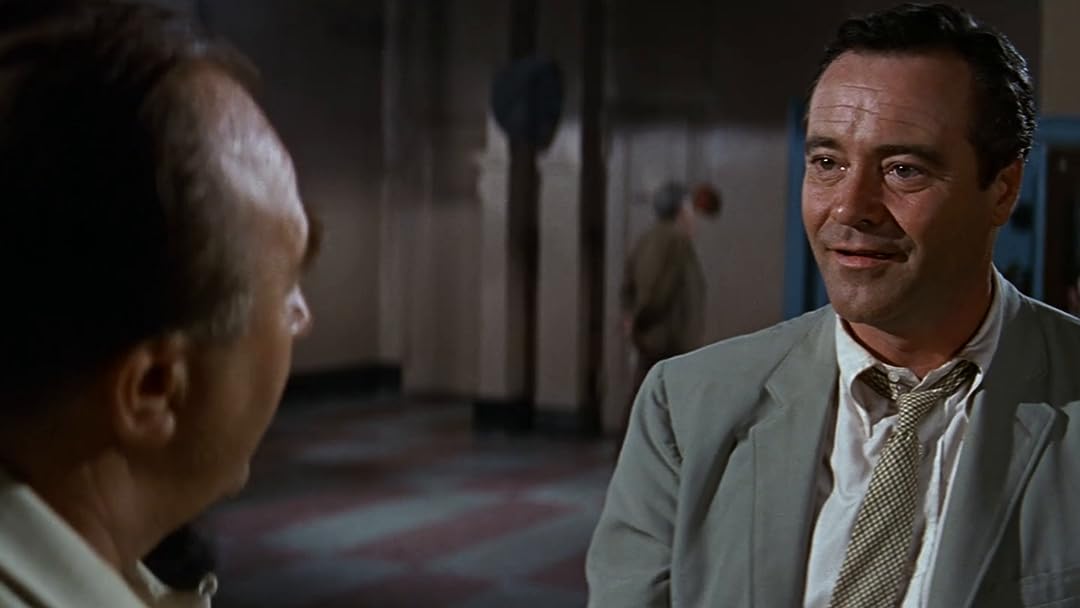 (1,947)
7.71 h 45 min1968X-RayG
Two divorced men decide to share a New York apartment. Fussy Felix, fastidious to a fault. He proves that cleanliness is next to insanity. And Oscar, who wreaks havoc on a tidy room with the speed and thoroughness of a tornado.

joel wingReviewed in the United States on December 14, 2020
4.0 out of 5 stars
Endearing story of 2 friends facing a difficult situation Also introduced OCD before term existed
Verified purchase
The Odd Couple is a 1960s classic featuring Jack Lemmon as Felix Unger and Walter Matthau as Oscar Madison. Felix’s wife just left him, he contemplated suicide and then his friend Oscar asks him to move in with him because he’s divorced as well. Felix introduced the viewing audience to obsessive compulsive disorder before that term existed.

The movie is more of a drama about the two men dealing with being single rather than a comedy. The two have a dinner date at their apartment for instance and all Felix can talk about is his wife and kids. Of course there are some funny one liners thrown in there. Felix for example shows up at Oscar’s house for poker right after he tried to kill himself. He said he took some pills. The poker players are all asking what kind of pill he took. Oscar responds he might have taken vitamins and he might be the healthiest guy in the room. Another time the weekly poker game ends after one players realizes that Felix cleaned the cards with disinfectant. The player says that’s not how poker is supposed to be played and then leaves.

In the end it’s an endearing story of two friends in a difficult situation.
C

C. C. BlackReviewed in the United States on February 21, 2021
4.0 out of 5 stars
Cigar Ashes In The Pancake Batter
Verified purchase
"The Odd Couple" was not the first teaming of Jack Lemmon and Walter Matthau (see Billy Wilder's "The Fortune Cookie" [1966]) but was the most momentous. Here the seeds are planted for one of the great comic duos of the late twentieth century: the Grumpy Old Men at middle-age. The story is so well known—largely due to the spin-off TV series with Tony Randall and Jack Klugman (1970–75)—that the movie is well worth revisiting and appreciated on its own merits.

The picture's engine takes a while to crank and start purring. The set-up—Oscar's slovenliness and Felix's suicidal depression—drags. When Oscar finally takes Felix under his wing and into this eight-room Manhattan apartment (who knew that sports writers lived so well?), things begin to hum. Bring on the Pigeon Sisters (Monica Evans and Carole Shelley) in Act III, and the movie hits its stride. The movie's stage-bound origin is manifest, but director Gene Saks does a good job of opening the action out into the city when it makes story-sense. Another highlight is Neal Hefti's infectious theme and upbeat score, injected at just the right places.

Beside Mss. Evans and Shelley, the supporting character actors who play Oscar's poker buddies—John Fiedler, Herb Edelman, David Sheiner, and Larry Haines—are all top-notch. Lemmon's neurotic Felix is a bit hammy for my taste, but Matthau's Oscar is never less than perfect. (I can't recall a movie in which Matthau wasn't perfect.) Typically, Neil Simon's script aims for zingers, not belly laughs, but Acts II and III drew a few of those out of me, too. Surprisingly, for a movie released in '68, this one holds up well. I think that's because of its simplicity: the characters and conflicts are still recognizable and have hardly dated. Something I had forgotten but recognized on returning to "The Odd Couple" is that it is genuinely a buddy film: not saccharine, but sweet in the way its two leads drive each other crazy but basically care about each other in their own crosswise, idiosyncratic ways. By the movie's end, a little of Felix has rubbed off on Oscar: a nice twist for an entertaining picture.
4 people found this helpful

GryphonisleReviewed in the United States on May 28, 2018
3.0 out of 5 stars
A Beautifully Written And Well Acted Original That Leaves Its Spin-Offs As Pale Copies.
Verified purchase
With a third remake---the second for TV---and having just watched a poor send-up of the form, featuring Lemmon and Garner ("My Fellow Americans") I decided to watch The Original.

Whereas the TV shows put a lot of emphasis on Oscar's hangups, the Movie takes two divorced (and clearly heterosexual) men, and turns them into a squabbling yet committed "married" couple in the sort of satire of marriage that they seemed to do so well back then. Matthau's Felix is as dazed by Oscar's complexities and irrational demands as one guesses he must have been by those of his wife. And Oscar is just as blind to how his needy and demanding nature are driving Felix crazy as he was to his actions towards his wife, even though he talks about it quite openly. Trying to watch the first TV show, which I saw as a kid, is much more difficult than watching the current version, but both are a pale effort compared to this well written and well acted movie. Lemmon has had other "odd couple" pairings, and had them before this too, but none hit the mark so well and with such sophistication as this one does and its the sophistication that is what is missing in so many of today's movies.
6 people found this helpful

ChrisSherrillReviewed in the United States on March 27, 2021
4.0 out of 5 stars
A classic
Verified purchase
What's not to love? Lemmon and Matthau and a really good supporting cast and a story that is keen and focused with sharp, crisp dialog that snaps with brilliance. There are lessons here that aspiring writers, editors and directors would do well to emulate. I am a little amazed at how well it has held up. I mean the movie is more than 50 years old, and the humor is still funny. I love a movie that makes me smile. I suppose the reason it still resonates is that it touches real places in our hearts and lives. I have only one issue - in my old age I don't like 'loud'. Yes it's a small thing but there it is.
One person found this helpful

Friends till the end.
3 people found this helpful

FrankenformerReviewed in the United States on August 10, 2015
2.0 out of 5 stars
Bu-ray not so good....
Verified purchase
The Odd Couple is my favorite movie of all time. I've watched 1000's of films in my 54 years, and there is no better screenplay than the one that Neil Simon wrote based on his own personal experience as a young student sharing a room in a cramped apartment with a real Felix Ungar and Oscar Madison. Through the years I've owned every format available, so you can imagine how thrilled I was when I just received the Blu-ray version. Unfortunately, the Blu-ray version is a bit of a disappointment. In fact, the DVD I have of this film is superior to the Blu-ray version both in video and audio. I know this seems confusing, but this is my unsolicited opinion. The Blu-ray version is crisp and clear (so is the DVD) but the color is gray and dull. The scenes of Oscar and Felix in the park and during their big fight over the Pigeon sisters are representative of the poor transfer to Blu-ray. I'm glad I only spent a few bucks on the Blu-ray - as much as I'd spend on a good pizza - because I'll never watch it again in this format. My 2-disc "Centennial Collection" version of The Odd Couple is still the best print in terms of video and audio. I recommend this Centennial version over the Blu-ray if you can still find it. It's getting harder to find, but if you want the best possible viewing experience of this classic American film, then the Centennial print is the one you want.
13 people found this helpful

Zachary LittrellReviewed in the United States on May 17, 2021
4.0 out of 5 stars
Boy howdy these are some sweaty men
Verified purchase
I really thought it'd be a ha-ha sort of buddy movie. No sirree. Not 10-15 minutes in and Jack Lemmon's Felix is (incompetently) trying to kill himself. Walter Matheu's Oscar is meanwhile making his pigsty apartment an even bigger mess and grumpily conceding to his ex-wife he's way behind on payments.

But it has a lot of heart. Anyone who has lived with a roommate can find little elements of truthfulness in it. Living with another human being might be the most unnatural thing in the world that nearly everyone does. Your differences come to the forefront, you get on each other's nerves, you resent each other for wanting to live your own way, and the affection that brought you two together erodes into petty arguments. And, if you're lucky, you start to rub off on each other.
One person found this helpful

K&amp;DReviewed in the United States on December 17, 2016
3.0 out of 5 stars
Sound sync slightly off near the end of the movie
Verified purchase
Near the end of the movie, the sound is slightly out-of-sync. It is just enough so that some people will notice, and some will not. We have checked on different machines and the problem is in the disc, not any of the machines.

It is disappointing that the manufacturer couldn't invest just a little bit more in quality control when mastering this blu-ray. We are not returning this disc because if one unit is like this, then most or all units will be like this (it depends on whether the problem was ever corrected before all units were made). There is no point in going to the trouble of exchanging discs just to get another one exactly the same.

This is a great movie and the blu-ray picture quality is excellent. If you are not sensitive to the sound-sync being a little bit off towards the end of the story, then go ahead and purchase this blu-ray for the enjoyable performances and excellent picture quality.
4 people found this helpful
See all reviews
Back to top
Get to Know Us
Make Money with Us
Amazon Payment Products
Let Us Help You
EnglishChoose a language for shopping. United StatesChoose a country/region for shopping.
© 1996-2022, Amazon.com, Inc. or its affiliates