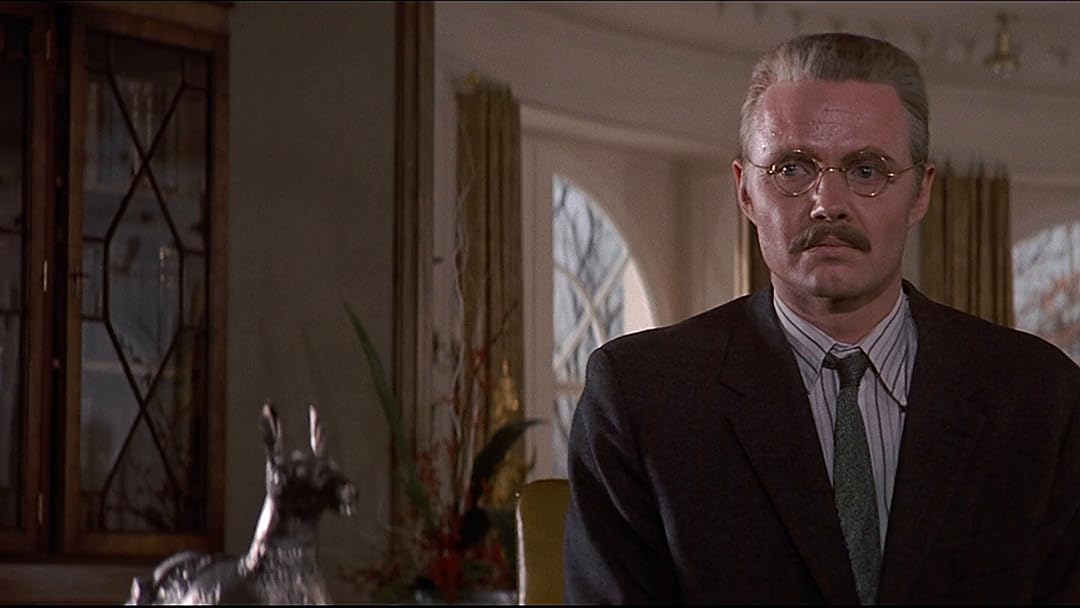 (1,124)
7.02 h 8 min2021PG
When a freelance journalist (Jon Voight) discovers evidence of atrocities committed by a former Nazi captain still at large, he embarks on a manhunt to track the criminal down.

RachelBReviewed in the United States on December 18, 2017
5.0 out of 5 stars
One of the all-time great spy thrillers
Verified purchase
One of the best all-time espionage thrillers. Peter Miller is a hard-working investigative journalist looking for the next scoop. On the night of Kennedy's assassination the story of a lifetime literally lands in his lap. He starts investigating the suicide of an elderly Jewish Concentration Camp survivor and is soon lured into the murky world of the SS in their new incarnation as the Odessa. Gripping, suspenseful, and with very high stakes, Frederick Forsyth's novel stands the test of time. Jon Voight is phenomenal in the role of Peter Miller; his performance is dazzling. Mary Tamm is breathtaking and believable in the role of Sigi and Maximilian Schell turns in a stunning performance as Eduard Roschmann. This is a must see. The filmmakers are true to the novel and the movie is all the more better for it.
18 people found this helpful

Eric WarrenReviewed in the United States on October 14, 2015
4.0 out of 5 stars
Top notch post WWII, Cold War era thriller
Verified purchase
Smart, well-written and well-acted "political" thriller starring the always great Jon Voight. Some of the weighty material -- the Holocaust, hunting ex-Nazis, etc.-- threatens to bog it down, but taut direction and great acting by all concerned keep the fairly complex plot moving. Basic idea here is that a group of nasty ex-Nazis who have somehow escaped imprisonment for their heinous WWI crimes have formed a network called Odessa, and are plotting to 1) destroy Israel; and 2) take over the world. Successfully, this time. Sound like a great work of fiction? it is, and it is not. The story is based on a novel by Frederick Forsyth, but the historical basis for the story is apparently accurate. One of the highlights here is Voight speaking dialogue with a fairly good (I think) German accent, and even speaking German, and seeming to know what he is saying. Odessa is billed as co-starting Maximillien Schell, but if you are coming for the legendary European actor, you will be disappointed. Schell only appears in scant scenes, including the extraordinary B&W histrionic footage. Still and all, a solid, and very scary entry in the "if we aren't careful the Nazis will come back, and take over the world" genre of films, which includes Marathon Man, The Boys from Brazil and many others.
26 people found this helpful

Serkan OkarReviewed in the United States on January 5, 2019
4.0 out of 5 stars
A Good Thriller about Post-war Nazi Conspiracy
Verified purchase
The Odessa File is a good post-war Nazi conspiracy thriller. Odessa is the secret alliance formed by the Nazis after the war and they allegedly secretly operate to restore the Nazi regime. One of their plans is the destruction of Israel (the missiles from Egypt are set to destroy Israel which is a point established in the beginning of the movie).

Jon Voight plays a journalist (Peter Miller) who comes across a diary of a Jewish person who was an inmate in Nazi concentration camp. Reading the diary, he becomes engaged with finding out the truth and discovering the identity of the notorious Nazi officer who is responsible with many atrocities and killings, one of which involves the shooting of a German officer.

***MINOR SPOILERS***
The movie well paced and delivers some serious thrills but I feel that the act 2 was kind of short, and after Peter Miller (Jon Voight) joins the Odessa by impostering as a member, it moves a bit too quickly to the 3rd act. After all the preparations to become an impostor and joining the Odessa, I expected Peter Miller to continue his role more. Overall, I think it is still a good movie and delivers well. The locations seem authentic European locations which give the movie a sense of realism in terms of the story. It was also pleasant surprise to see Mary Tamm who is as gorgeous as she ever was, playing the girlfriend (Sigi) of Peter Miller (she had played Romana, female company of Doctor Who in the Tom Baker Doctor Who episodes).

Blu-ray transfer is very decent but there are no special features.

joel wingReviewed in the United States on December 11, 2019
4.0 out of 5 stars
The Holocaust and postwar Nazi networks wrapped up in a thriller
Verified purchase
The Odessa File was based upon a novel by Frederick Forsyth. The movie is about a West German reporter Peter Miller (Jon Voight) who is trying to track down an old Nazi Eduard Roschmann (Maximillian Schell) and in doing so discovers the Nazi organization Odessa. Miller finds that Odessa is a vast underground network made up of followers of Hitler that helped them escape Europe, but also set up new lives in West Germany by creating fake identities for them.

The Odessa group didn’t really exist but the Forsyth novel and this movie highlighted that there were still Nazis who were helping each other, trying to cover up their pasts, and were still involved in government and business. This was something people were trying to forget or put behind them after World War II.

The diary that Miller found also brings up the Holocaust and the Nazi crimes. Roschmann for example gives the argument that he was only a soldier following orders. This was how many attempted to justify the horrible crimes that the Nazis committed. The fact that so many people involved with this were still running around free never facing justice was another point the film tried to make.

Overall, this is a very good film bringing up important historical facts within an interesting thriller.
C
4 people found this helpful

University DocReviewed in the United States on July 4, 2016
5.0 out of 5 stars
Great film worthy to watch more than once! Recommend!
Verified purchase
The Odessa File is based on the second book written by Frederick Forsyth. The Day of the Jackal was the first. Both films are great, as are the books. With a few changes, this film follows the book closely. Jon Voight does an excellent job of portraying idealistic journalist Peter Miller. The film is fast paced and a great character study as you watch German Peter learn about O.D.E.S.S.A. and decides to follow the story to the end. The story begins on the day that Kennedy is assassinated. If he hadn't pulled over to listen to that story on the radio, he wouldn't have stumbled across the most dangerous "story" of his life.
Overall, a great action film everyone should watch at least once. The DVD is great quality with balanced audio and video. I highly recommend. We already have this film on VHS and watch it over and over.
18 people found this helpful

Robert S. TrumpoltReviewed in the United States on February 24, 2016
5.0 out of 5 stars
Some Fact Mixed With Fiction & Completely Enjoyable!
Verified purchase
"The Odessa File" is a very clever suspense film set around the intrigue of a post-World War II SS type organization that is well-funded and ready to make a comeback in the 1960's! Jon Voight plays an German free-lance journalist who stumbles upon a Riga Latvia, concentration camp victim's diary that opens his eyes to the threat of this rising organization operating not only in Germany but around the world as it prepares to unleash new horrors. At the same time, the diary reveals a very important personal connection to Voight's character that is hinted at but finally revealed only near the end of the film where a climactic event occurs. Voight is perfect for the role down to his English spoken german accent (I believe he is of German descent so he certainly also looks the part. The absolutely gorgeous (in my opinion) Mary Tamm plays his love interest in what I believe was one of her few feature film appearances. Mary Tamm went on to become known to viewers as the "first Romana" for a season of Doctor Who in the late 1970's, a few years after this film was made. I think what makes this film work for me is that Odessa apparently was an organization that truly existed for a time after WW II that helped former SS soldiers begin new lives under false identiies so this shred of truth was simply built upon further to make for a truly engaging thriller from start to finish.
10 people found this helpful

Michael Lee PembertonReviewed in the United States on April 25, 2014
5.0 out of 5 stars
Revenge twist at the conclusion
Verified purchase
Take a very independent minded young German freelance photographer (Jon Voight), with no special skills in investigative journalism or "black ops" special agent martial training, and drop him into a mystery that he has a personal interest in solving. The young man supposedly lost his father, a highly decorated Wehrmacht junior officer, in an incident during the war. As the story opens, a former inmate at a Nazi concentration camp commits suicide by gassing himself in his apartment. The old Jewish man had kept a journal of his experiences under a particularly brutal camp commander, whom he discovers to be still alive and prospering under a new identity, protected by a mysterious organization. While en route to cover another story, the young photo-journalist is delayed by traffic and, when he attempts to take a detour, simply happens upon police and rescue vehicles responding to the suicide . The police investigator brings the journal to the reporters attention and he is so intrigued by the implication that numerous former Nazi SS officers have escaped detection that he is compelled to finish reading the contents of the journal in one sitting, shirking his other responsibilities. His obsession with the journal and the story of the camp commander is unrelated to the death camps or the Jews. Something written in the journal, however, gives him a very personal motivation to meet the mysterious camp commander. Very engrossing to watch as an amateur goes undercover in a very dangerous case of international intrigue that promises to give him answers or take his life.
One person found this helpful

G. Ware Cornell Jr.Reviewed in the United States on December 20, 2015
5.0 out of 5 stars
Best screen adaption of Forsyth novels
Verified purchase
There was a time during to postwar period where truly excellent political and spy thrillers were made. The source of a number of these was Frederick Forsyth. Movies such as The Fourth Protocol and the Dogs of War were based on Forsyth novels. The greatest of the was The Odessa File staring the young Jon Voight. Voigt plays Petter Miller, a young Hamburg reporter, who on November 22, 1963 stumbles upon the news story of a lifetime, the existence of a secret organization of former SS officers-the Odessa. That date will be instantly recognized by the baby boomers reading this review and serves to set the stage for the geopolitical atmosphere of the film.

The reporter begins a search for an SS officer, long believed dead by infiltrating the Odessa. It is a dangerous undertaking and Voight survives by wit and determination. The director Ronald Neame capitalizes on a brilliant leading cast of Voight, Maximilian Schell and his older sister Maria. The score writing by Andrew Lloyd Webber is cheerfully creepy.
See all reviews
Back to top
Get to Know Us
Make Money with Us
Amazon Payment Products
Let Us Help You
EnglishChoose a language for shopping. United StatesChoose a country/region for shopping.
© 1996-2021, Amazon.com, Inc. or its affiliates