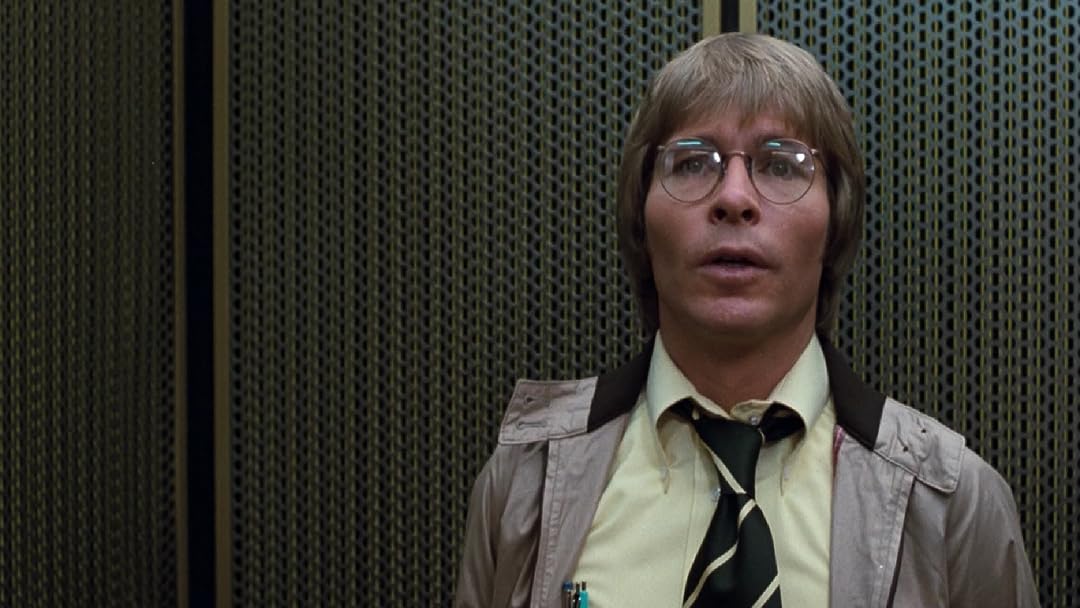 (2,343)
6.61 h 37 min1977X-RayPG
God comes to Earth to spread the Good Word, but has a hardtimeconvincing his chosen messenger, John Denver, an assistant managerof asupermarket, who He really is.

seattlewhovianReviewed in the United States on October 5, 2019
5.0 out of 5 stars
A truly great family movie!
Verified purchase
I've seen some reviews talking about John Denver's acting being low-par -- I'll have to disagree. I'm no acting expert, but as I recall, when this came out in the 70s, John Denver got high acclaim from some critics, saying that for him not being a trained actor, he does remarkably well. I'm a real fan of John Denver, and I read the reviews, out of curiosity of what film critics thought. He and my other favorite musical artist, Eminem, both turned out to be excellent actors. Oh yeah, and this movie is very cute! When we went to see it in southern Mississippi when it came out, my mom's friend joined us. They had to laugh because the Christians in the audience were like "amen" and "hallelujah" or whatever, and mom told me later what was amusing was that they were presenting God and what he said from a Jewish, not Christian, POV. We're atheist, so maybe we were seeing from a more objective manner.
7 people found this helpful

Joe O'BrienReviewed in the United States on September 11, 2021
5.0 out of 5 stars
"Suppose- Just Suppose - God Told You To Spread The Word?" "It's an Almighty laugh!"
Verified purchase
I first saw "Oh,God!" in the theater when it was first released in October 1977. I was 21 at the the time. Well I'm 65 now and I got it on DVD and I appreciate it even more. John Denver who was a very popular singer back in the '70's plays Jerry Landers , a manager of a supermarket and Teri Garr plays his wife. They have two kids, a normal suburban family in L.A.

One night just before bed Jerry finds a note on his pillow that says GOD wants an interview with him. He figures it a practical joke from one of his buddies,tears it up and throws it the trashcan. The very next day he finds the note magically put back together in a cucumber. He also talks to Him on an intercom in an office on floor that doesn't exist. And, talks to Him on his car radio 'that's been busted for two months.' Legendary actor,comedian,singer and "Oscar" winner George Burns is just great in his role as GOD. Based on the bestselling novel by Avery Corman with a screenplay by Larry Gelbart who has done many episodes of the T.V. series M.A.S.H. and directed by the great Carl Reiner who created the classic "The Dick Van Dyke Show" back in the '60's and has done some really good movies with Steve Martin does a great job here.

John Denver is impressive in his movie debut also as GOD's modern day 20th century Moses. The movie also features the lovely Dinah Shore who had a daytime talk show back in the '70's. Paul Sorvino is funny as a pompous ,loud mouth evangelist who brags that he will be giving the prayer at the next Super Bowl. GOD tells Jerry to tell him that he should be a shoe salesman instead while he is giving a sermon. He sues him for slander in the great courtroom climax. The picture was a hit at the box-office ranking behind "Star Wars" , "Smokey and The Bandit", Steven Spielberg's "Close Encounters of the Third Kind" , "Saturday Night Fever" and the Roger Moore James Bond flick "The Spy Who Loves Me" The screenplay was nominated for an "Oscar" and the well known film reviewers Roger Ebert and Gene Siskel who wrote columns for The Chicago Tribune and Chicago Sun-Times and had a movie review program first on PBS and The Walt Disney Company for 20 years were fans of the movie.

Some taglines from the movie posters read...."Anybody who could turn Lot's wife into a pillar of salt,incinerate Sodom and Gomorrah and make it rain for forty days and forty nights has got to be a fun guy." " Suppose - Just Suppose - God Told You To Spread The Word?" and "It's an Almighty Laugh !" George Burns made two sequels, "Oh,God!" Book II in 1980 and "Oh, God, You Devil!" ,(which he also played the role of the Devil,) in 1984. I didn't see those. He had a great career. He passed away in 1996 at the age of 100. GOD bless him.

JLJRReviewed in the United States on May 31, 2020
5.0 out of 5 stars
A very well done, family film
Verified purchase
My parents took me and my siblings to see this when it came out. I was way too young to understand it at the time. I recently rewatched it. What a lovely, well cast, well made film! It’s sad that this was John Denver’s only big screen role. He did a great job as Jerry Landers, the kind hearted, devoted family man chosen by God to spread God’s message.
The message is very Deistic, but is not offensive. Yes, this was made in the seventies, but it does not take away from the message, or the acting. Teri Garr is adorable. George Burns plays a great God. Seeing how nicely built John Denver was is a bonus.
I bought the DVD with commentary with Teri Garr, Carl Reiner, and Larry Gelbart. That is well worth the price.
Heck, even Gene Siskel and Roger Ebert loved this movie when it came out.
3 people found this helpful

The Tally HoReviewed in the United States on July 9, 2019
3.0 out of 5 stars
Review without Spoiler - Pros & Cons
Verified purchase
Oh, God! is a 1977 comedy film starring George Burns, John Denver, & Teri Garr. The film is based on a novel of the same title Avery Corman. The story centers on unassuming supermarket manager Jerry Landers (Denver), chosen by God (Burns) to spread his message despite the skepticism of the media, religious authorities, and Landers' own wife (Teri Garr). The film inspired two sequels, Oh, God! Book II (1980) and Oh, God! You Devil (1984), both of which featured Burns reprising his role, but with no other recurring characters from the original story. Here are the pros & cons as I see it, I hope this helps.
Pros:
1. The acting is not bad, I was surprised John Denver could act, in addition Teri Garr acts very well and is not hard to look at either.
2. The story is fine and makes some good points, it is also nice to watch a film without violence and tons of computerized special effects for a change.
Cons:
1. The film is a little slow in parts, especially the beginning, it could have been edited better.
2. The cinematography is not bad, but nothing to write home about.
3 people found this helpful

Kevin J. LoriaReviewed in the United States on April 8, 2020
4.0 out of 5 stars
It’s dated but still funny with a lot of heart
Verified purchase
God appears before a Supermarket assistant manager to give the World his word. The blockbuster forerunner to films like Bruce Almighty. The great Carl Reiner directions John Denver and George Burns (who said they cast him because he was the closest to God’s age). The score and style are a bit dated but the message is heartfelt and warmly handled without being blasphemous. George Burns has a twinkle that only he could deliver in the role, he was Yoda before Yoda in his shift from sagely wise to smart mouth cut-up. This film represents a huge second career comeback for the golden age comedian. The film’s climactic courtroom scene reminds me of Miracle on 34th Street. This is the first of 3 Oh God films, I’d skip oh God Book 2, But Oh God, You Devil has its moments.
One person found this helpful

AmazonianReviewed in the United States on December 15, 2017
5.0 out of 5 stars
A great movie - for all ages, and all movie tastes!
Verified purchase
I love this movie - every actor played his/her role with a deep breadth of genuineness and sincerity, which I so much appreciate in a film that could so easily not work, given its comic potential, if acting seemed effected or pushing the comic element (such as with the Pink Panther remakes, where Clouseau seemed not believable (no fault of the actor, a great effort by Martin, but for that role only Sellers achieved true believability, so far, at least for me, for that role, which must be difficult to do).

This movie has great performances throughout, every actor did very well, and all complemented each other, in producing a heart touching yet highest level family type comedy - again, I can't help but love this movie, and hope you do too!
4 people found this helpful

Amazon CustomerReviewed in the United States on August 20, 2016
4.0 out of 5 stars
A very nice movie, shown long before the book trilogy "Conversations ...
Verified purchase
A very nice movie, shown long before the book trilogy "Conversations with God" was created. There are a lot of consistencies in this movie and those three wonderful books, which makes me think our creator had a hand in this wonderful little movie as well. Forget religion and embrace spirituality. There is no final judgment. There is no devil or hell except that which we manifest in our own minds. Life is what we make of it whose purpose is to remember "who we are". That is, eternal spirits living temporarily in human form. We get as many chances as we need to evolve to Godlike status. We are all sons and daughters of our creator on an eternal evolutionary journey. Our creator is love, truth and wisdom and we are made in his image.
7 people found this helpful

DEPLORABLE MIKEReviewed in the United States on April 26, 2020
5.0 out of 5 stars
Great family movie done in good taste.
Verified purchase
The underlying message is "God Is with Us". Its a great message we all to often must be reminded of. Georg Brns is his usual self but carries of the role of a modern day appearance of God. John Denver who is greatly missed and left us way too soon was a great singer song writer but rates right there with Glen Cambell in acting ability....on the low end of the scale...All in all a great movie for its message alone. "God Is Real and he loves everyone"
One person found this helpful
See all reviews
Back to top
Get to Know Us
Make Money with Us
Amazon Payment Products
Let Us Help You
EnglishChoose a language for shopping. United StatesChoose a country/region for shopping.
© 1996-2021, Amazon.com, Inc. or its affiliates