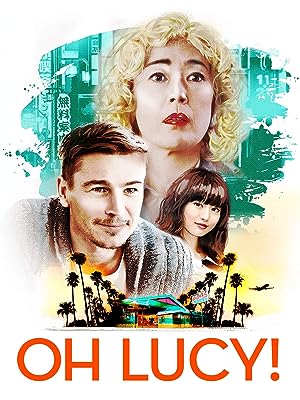 (76)
6.81 h 35 min201716+
When her English-instructor John suddenly disappears from class, Setsuko travels halfway around the world in search of him to the outskirts of Southern California.

will crowReviewed in the United States on November 5, 2021
3.0 out of 5 stars
down the middle and not a comedy
Verified purchase
If the sad trend of suicide by depressed and overwhelmed Japanese middle class workers seems like a topic of humor then you will find this refreshing.
If you are able to pick the nuggets of tenderness out of this then you are watching with a discerning eye. The toxic atmosphere of overcrowded Japan and it's intolerance for weakness and displays of affection has lead many to kill themselves and the lack of social constructs that offer some kind of help makes this even more unhappy.
We have a tendency in American movies to create a manic but lighthearted female lead character who sees life differently and suffers for it but remains hopeful. Even the ones who cut their wrists are somehow redeemed in the end. This is that kinda film but taking place in Japan. It is NOT their natural genre.

Cross Country RiderReviewed in the United States on November 17, 2018
2.0 out of 5 stars
It's like reading Anna Karenina...and it feels just as long...
Verified purchase
My Wife and I are an American/Japanese couple. This movie should have connected with both of us, however it just fell flat with both of us. Neither of us recommend it.
Do you enjoy suicides and suicide attempts?
Do you hate comedies that are funny, but enjoy uncomfortable and awkward family drama of crazy people?
We would have had sympathy for the characters, we did have sympathy for one...but we couldn't have any sympathy for irresponsible and crazy people being irresponsible and crazy, like the movie wanted us to have.
Neither my wife or I enjoyed watching this movie...we didn't stop watching it, thinking that it might get better...but it didn't. It's not poorly made...just not good. We kept looking at each other, asking "what the hell", and shifting around uncomfortably.
This movie is a "comedy" in the same fashion as Tolstoy's book Anna Karenina; It is a "comedy" by means of not being a Shakespearean Tragedy. In the end, the main character isn't dead, so "comedy"?
"I don't know how to enjoy this movie at all."

DJSReviewed in the United States on September 3, 2018
5.0 out of 5 stars
probably not 5 stars for a general audience...
Verified purchase
First of all, why is this film specified as comedy genre? There are some amusing parts, of course, but humor certainly is not the primary emphasis. It's actually quite touching in the way that it treats the messiness of individual and familial relationship dysfunction (for lack of a more nuanced term) in the modern world. Beyond that, it will entertain anybody who has interest and curiosity for the interplay of different cultures and the little threads of connection that are inevitably woven during that interplay.
3 people found this helpful

I'll have to watch it again...
One person found this helpful

Owen BrownReviewed in the United States on June 8, 2019
3.0 out of 5 stars
Not a comedy!
Verified purchase
I hate it when dramas get billed as comedies. This move has is NOT a comedy. False advertising!
2 people found this helpful

Jenifer EhrethReviewed in the United States on February 10, 2021
5.0 out of 5 stars
Funny little snippet of Chinese culture
Verified purchase
Adorable comedy that was completely unpredictable. Sharing it with friends.

GoddessCharReviewed in the United States on April 28, 2019
1.0 out of 5 stars
Not what it is advertised as
Verified purchase
The trailer is very misleading. It shows it as a lighthearted comedy, but it gets pretty twisted.
2 people found this helpful

Jane in LAReviewed in the United States on August 15, 2018
5.0 out of 5 stars
You won't be sorry...
Verified purchase
My brother made me watch this movie. I'm glad he did. It's weird and charming. The characters are not your stock Hollywood puppets, but feel like real people wanting more out of life.
See all reviews
Back to top
Get to Know Us
Make Money with Us
Amazon Payment Products
Let Us Help You
EnglishChoose a language for shopping. United StatesChoose a country/region for shopping.
© 1996-2021, Amazon.com, Inc. or its affiliates