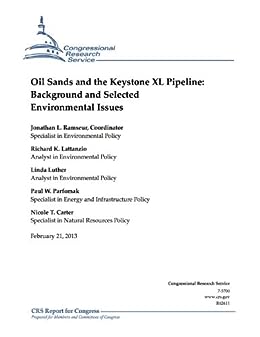 by Paul W. Parfomak (Author), Nicole T. Carter (Author), Richard K. Lattanzio (Author), Linda Luther (Author), Jonathan L. Ramseur (Editor) & 2 more Format: Kindle Edition
See all formats and editions
Sorry, there was a problem loading this page. Try again.
If constructed, the Keystone XL pipeline would transport crude oil (e.g., synthetic crude oil or diluted bitumen) derived from oil sands in Alberta, Canada to destinations in the United States. Because the pipeline crosses an international border, it requires a Presidential Permit that is issued by the Department of State (DOS). The permit decision rests on a “national interest” determination, a term not defined in the authorizing Executive Orders. DOS states that it has “significant discretion” in the factors it examines in this determination.

Key events related to the Presidential Permit include

• September 19, 2008: TransCanada submitted an application for a Presidential Permit for its Keystone XL pipeline.

• May 4, 2012: TransCanada submitted a revised permit application to DOS.

Although some groups have opposed previous oil pipeline permits, opposition to the Keystone XL proposal has generated substantially more interest among environmental stakeholders. Pipeline opponents are not a monolithic group: some raise concerns about potential local impacts, such as oil spills or extraction impacts in Canada; some argue the pipeline would have national energy and climate change policy implications.

A number of key studies indicate that oil sands crude has a higher greenhouse gas (GHG) emissions intensity than many other forms of crude oil. The primary reason for the higher intensity: oil sands are heavy oils with a high viscosity, requiring more energy- and resource- intensive activities to extract. However, analytical results vary due to different modeling assumptions. Moreover, industry stakeholders point out that many analyses indicate that GHG emissions from oil sands crude oil are comparable to other heavy crudes, some of which are produced and/or consumed in the United States.

Because of oil sands’ increased emissions intensity, further oil sands development runs counter to some stakeholders’ energy and climate change policy objectives. These objectives may vary based on differing views concerning the severity of climate change risk and/or the need for significant mitigation efforts. Opponents worry that oil sands crude oil will account for a greater percentage of U.S. oil consumption over time, making GHG emissions reduction more difficult. On the other hand, neither issuance of a Presidential Permit nor increased oil sands development would preclude the implementation of energy/climate policies that would support less carbon intensive fuels or energy efficiency improvements.

A primary local/regional environmental concern of any oil pipeline is the risk of a spill. Environmental groups have argued that both the pipeline’s operating parameters and the material being transported imposes an increased risk of spill. Industry stakeholders have been critical of these assertions. To examine the concerns, Congress included provisions in P.L. 112-90 requiring a review of current oil pipeline regulations and a risk analysis of oil sands crude.

Opponents of the Keystone XL pipeline and oil sands development often highlight the environmental impacts that pertain to the region in which the oil sands resources are extracted. Potential impacts include, among others, land disturbance and water resource issues. In general, these local/regional impacts from Canadian oil sands development may not directly affect public health or the environment in the United States. Within the context of a Presidential Permit, the mechanism to consider local Canadian impacts is unclear.
Read more
Previous page
Next page