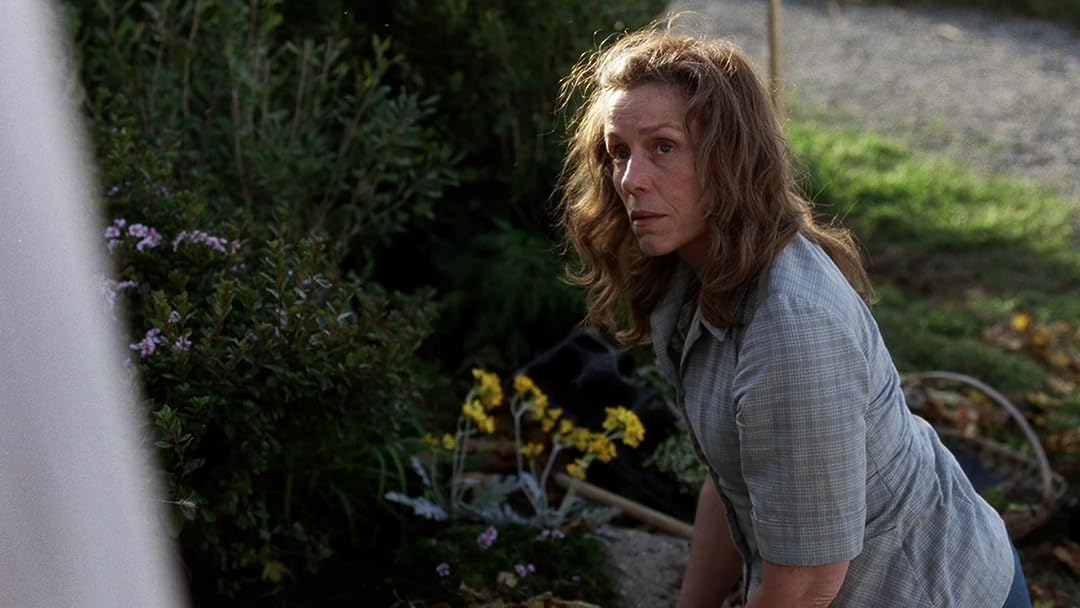 Season 1
(506)
8.3201418+
[HBO] Life in a seemingly placid New England town is seen through the eyes of a middle-school math teacher in this four-part miniseries.

alltatupReviewed in the United States on July 16, 2017
5.0 out of 5 stars
WARNING: NO FAIRY TALE VIEW OF LIFE HERE
Verified purchase
This is film-making and story-telling at their best: it isn't pretty all the time, but it's real, nuanced and poignant. McDormand does a great job portraying a woman whose traumas have hardened her and made it nearly impossible for her to show love. That's one aspect of this character. Another aspect, which I particularly loved, is that she refuses to co-sign anyone else's phony bs. Her sweet, kind, supportive and ultimately grovelling milquetoast of a husband wants to make everyone happy; Olive could care less what anyone thinks of her. I feel a deep respect for her rejection of social masks. She feels how she feels, and she shows it.

The character isn't a great mother or wife, that's for sure. She is emotionally crippled, and the series bares her wounded soul. I found it especially touching that she could only show affection towards her husband after he had his stroke. I also loved the way her son comes right out and calls her to task for her callous contradictions, and I understood why he would choose to keep a great distance between himself and his mother.

So if you enjoy psychological realism and if you're sick of all the overly-idealized characters portrayed in so much tv pablum, you might enjoy this.

SkyhawkReviewed in the United States on February 21, 2015
5.0 out of 5 stars
Outstanding adaptation of a marvelous book
Verified purchase
The book "Olive Kitteridge" is a collection of 13 short stories. Olive is the primary character in about half the stories and peripheral to the story in the other half, sometimes playing a major role, sometimes barely a presence at all. Each story is excellent and complete in itself, but as the stories accumulate, they gain power and in the end Olive Kitteridge packs a major wallop in its penetrating and complex portrayal of small town New England life.

Wisely, the HBO adaptation omits about a third of the book, focusing almost exclusively on Olive as she moves through the twenty five years between middle and older age. As we meet her, she radiates a sense that she and only she knows best. While she does appear to be genuinely concerned about the welfare of those she addresses, her manner is brusque and frequently offensive. In Crosby, Maine, those who know her well love and appreciate her despite her imperious ways. To strangers she may appear eccentric to the point of insanity. Although she surely loves her child, she is cold and harsh, unable to demonstrate affection. She's the same way with her husband, blaming him on some level for her infatuation with a depressed and perhaps alcoholic chain-smoker, an English teacher at the junior high where she teaches math. Life opens her eyes, and we see Olive grow, see her mind begin to open, to whittle at the certainty she once knew.

The screenplay and the knockout performances capture to a T the sense of a restrained outer appearance barely but effectively containing passions and torments raging within the hearts and souls of this isolated community. Highly recommended. I would also recommend reading the book before, after or in conjunction with viewing the miniseries. Truly a mirror of the soul.
61 people found this helpful

A. GochisReviewed in the United States on January 26, 2017
5.0 out of 5 stars
No Really, I'm Fine
Verified purchase
With Frances McDormand, Richard Jenkins and Peter Mullan featured in the cast, you have an inkling of what kind of deep water you are about to enter. And it is cold. These are Actors on another level, with experience, nuance and realism in their performances. On top of that, you have a script that rings so true, it is scary. I did not read the book but I believe Olive Kitteridge is one of the best mini-series that I have seen in decades. The dialogue between people is so frank. The subject matter of unfulfilled expectations, the complexity of human relationships and depression is treated unflinchingly. I highly recommend this series if you are ready to escape from escapism.
16 people found this helpful

Amazon CustomerReviewed in the United States on August 11, 2017
5.0 out of 5 stars
An excellent read by Elizabeth Strout and a well-done mini-series based ...
Verified purchase
The fictional Olive Kitteridge is a no nonsense, watered-down, palatable version of my own mother. Reading the book and watching the HBO mini-series helped me realize some things about my own, emotionally inaccessible now 68-year-old mother, whom to this day, I have never seen cry in my entire life, and I still actually know very little about nor am any closer to understanding even though I grew up in a house not so different than the one portrayed in the film. To be brief, I came away with the notion of just how much influence a mother can have, and specifically, that unresolved generational anger has a way of manifesting and releasing itself in various ways. An excellent read by Elizabeth Strout and a well-done mini-series based on the book. Five stars for both.
19 people found this helpful

Heather in NCReviewed in the United States on October 26, 2015
3.0 out of 5 stars
Great acting from Frances McDormand and Richard Jenkins
Verified purchase
A dark tale. I don't mind an unreliable or even unlikable protagonist (ie, am a huge fan of Mad Men), but Olive left a bitter taste in my mouth. Great acting from Frances McDormand and Richard Jenkins, but the series is really a portrait of unhappiness, with little sense of resolution. Some slight character development at the end, but very painful to watch at times.
6 people found this helpful

JT AtlantaReviewed in the United States on October 6, 2015
5.0 out of 5 stars
There is a reason this show won so many awards!!!!!!!!!
Verified purchase
We all know people like Olive Kitteridge. Someone who is hard to put your finger on. Someone you know something is 'different' but hard to explain or get specifics. That is how I view Olive Kitteridge. If you enjoy 'dark' humor or fiction, this is for you. It is only 5 episodes (I believe), the first was a bit hard to get into, but it really moved after that. EAch episode is about a different point in her life, so if you do not like episode I (this was my least favorite, but I had people to tell me to 'keep watching'), it gets better and better. Character development is superb. Her co-cast/stars were remarkable from her husband to her son, etc. I watched one per night and was done in less than a week. Well done HBO!
5 people found this helpful

A ReaderReviewed in the United States on July 2, 2017
5.0 out of 5 stars
Could you be a little Olive?
Verified purchase
Excellent production of a many-faceted story; perhaps you, too, will find a little Olive in yourself. New England denizens seem to lend themselves to bare-boned life stories, thinking of Delores Claiborne, Robert Frost-ian poetry, and another New England based gothic whose name escapes me at the moment. So- Olive- the bare boned life without the gothic.
3 people found this helpful

SufidancerReviewed in the United States on November 9, 2020
1.0 out of 5 stars
Depressing!
Verified purchase
I love the actors in this movie, but the show is depressing. I kept hoping it would get better, but no such luck.
2 people found this helpful
See all reviews
Back to top
Get to Know Us
Make Money with Us
Amazon Payment Products
Let Us Help You
EnglishChoose a language for shopping. United StatesChoose a country/region for shopping.
© 1996-2021, Amazon.com, Inc. or its affiliates