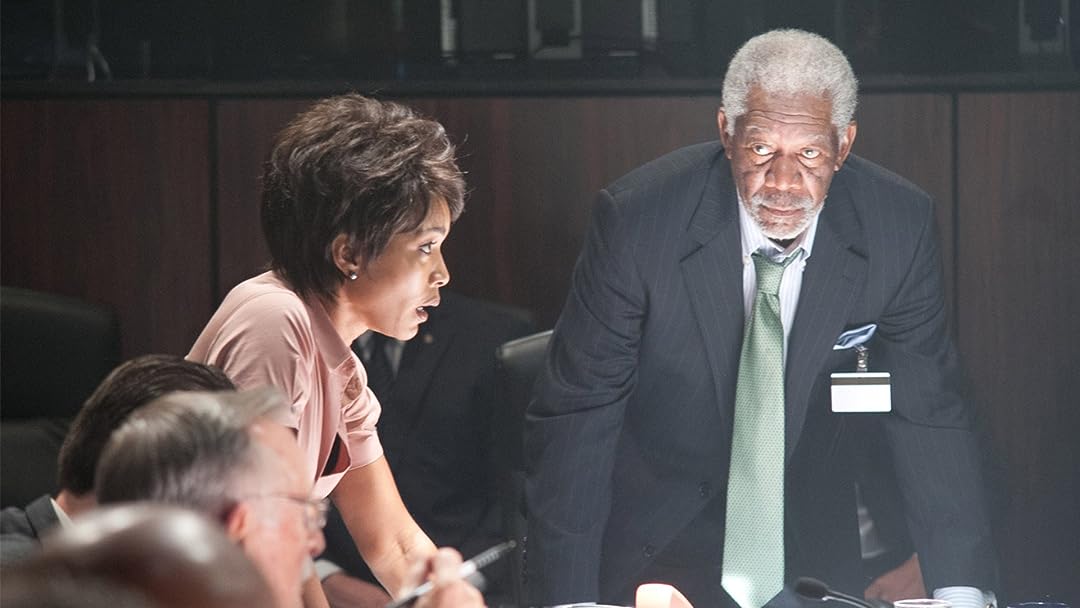 (11,960)
6.51 h 59 min2013X-RayR
A terrorist mastermind kidnaps the President of the United States inside the White House, and a disgraced former Secret Service agent must save the President and take down the terrorists.

T. P. TullyReviewed in the United States on August 26, 2019
2.0 out of 5 stars
Dumb script
Verified purchase
Great actors, fairly well directed, but many of the characters' actions don't make sense and aren't believable. The "emergency" decisions of a 4- or 5-star general, the acting president and the captured president are often nonsensical--such as when the general insists on sending several SEAL team into action against a weapon sure to destroy them; the captured president telling his cabinet member and military to reveal secret codes that will render America's entire nuclear arsenal useless; and the acting government behaving as if the lives of a dozen captured politicians is worth causing a possible world war. Also the possibly stock footage of the emergency deployment of American forces in Washington DC plodding through the streets while incredibly well-disciplined and effective teams bombard the White House and machine-gun seemingly hundreds of civilians. The behavior of governments is usually horrible, but this is a joke. Also the sound effects were mixed so much louder that the dialogue you have to keep changing the level to keep the neighbors from calling the cops. Other than that, there were lots of explosions and gunfire, and no sex whatsoever.
11 people found this helpful

Wayne C. RogersReviewed in the United States on February 29, 2016
5.0 out of 5 stars
Watching this is a great way to prepare for its sequel.
Verified purchase
Because London Has Fallen (the sequel) is coming out on March 4th, I re-watched the DVD of Olympus Has Fallen. My opinion that it was a Five-Star film of pure entertainment held true. I saw this movie and White House is Down at the theater when both films came out in 2013.

Everyone has their favorite of the two films. Mine, of course, is Olympus Has Fallen, and I'll tell you why.

The first reason is Ashley Judd, who has a very short role in the beginning as the President's wife. She is so talented and beautiful in those first ten minutes that you literally fall in love with her yourself and understand why everything else follows. When she plays a short, supporting role, Ashley conveys a certain magic on screen that is utterly captivating

The second treason is Gerard Butler who somehow manages to steal every movie he's in. Butler is the perfect "every man". He's able to project humor, drama, and action without any effort. He's also the type of actor that most men would like to have as a friend, while the ladies find themselves attracted to him for other reasons. He certainly sold me on being a Secret Service agent, who just happened to be ex-Special Forces. The fight scenes are showcased with great aplomb and display Butler's hand-to-hand combat skills to the fullest extent. I almost expected Butler to say, "Yippy ki ya" to the main villain, who's played by Rick Yune

The third reason is the rest of the main cast with Aaron Eckhart, Angela Bassatt, Morgan Freeman, Rick Yune, Raha Mitchell, and Robert Forster. They all bring their characters to the forefront of each scene, creating a realness to their roles and helping to move the film along.

The fourth reason is Antoine Fuqua, who directed the film. I haven't seen a movie of his that I haven't enjoyed like Training Day and Tears of the Sun to name a few. He makes the impossible happen, and you're immediately swept up into the urgency of the situation with a roller-coaster type ride until the final scene is viewed in all of its majestic glory.

This is not only a film worth seeing, but you will want to own it as well.

Now, if only London Has Fallen is half as good as this one, I'll be a happy camper.

Brian MustainReviewed in the United States on August 23, 2019
3.0 out of 5 stars
Die Hard on steroids
Verified purchase
Gerard Butler's character is likeable, humble (in his own way), loyal. And (spoiler alert!) he essentially saves the world--at least the United States--from near-total destruction. With a couple of seconds to spare. Typical James Bond-type ending, except that this hero is faithfully married (or perhaps they're not YET narried--I'm not sure).

The good guys are really good, and the bad guys are genuinely nasty. The plot is that of Die Hard, except that the stakes here are practically the entire planet. There is a lot of action, and the protagonist is left alone to save the world because he alone was able to avoid getting killed by the bad guys (who seemed to be able to hit anyone else they aimed at--but when they pointed their weapons at Butler's character, the bullets always seemed to miss). It's all very silly (but quite bloody), but not strikingly different from most decent action movies.
3 people found this helpful

JanReviewed in the United States on July 18, 2016
5.0 out of 5 stars
Unrealistic But Fun and Thrill-Filled
Verified purchase
Let me begin by saying that the entire premise of this film is ridiculous because surely the Secret Service is a hell of a lot better prepared to defend the White House against an attack than demonstrated in the film. And why were there no female agents that I could see? Just lots of silly dudes in black suits all lining up to get killed instead of fighting inside the WH commando style. That being said, the film is non-stop, edge of your seat action, and my poor a-fib afflicted heart was racing during the entire film. I have been utterly in love with Gerard Butler ever since "Phantom of the Opera" (S-E-X-Y!!!!!), and enjoyed his engaging mix of tenderness and savagery in this film. He does it SO well. So if you want to see a rip-roaring good action-packed film that will keep you rooting for the good guys and wishing you could personally smash the bad-ass villain in his face right through your screen, then this is the film for you. If you want reality, skip this movie. If you want to watch the hunky Butler in action, just turn the sound off and enjoy.
12 people found this helpful

Kathryn Le VequeReviewed in the United States on January 28, 2021
5.0 out of 5 stars
Surprisingly Good
Verified purchase
You can't go wrong with Aaron Eckhart, Gerard Butler, and Morgan Freeman in ANY movie, but I like action flicks, so I thought I'd give this one a try.

For a rock 'em, sock 'em feature, it was surprisingly good. The story was comprehensive. Even tragic. There was great character development with Gerard Butler's 'Mike Banning'.

Aaron Eckhart is always strong in whatever he does, and although he's my secret husband, I have to say that he might have been the weak link in this film. He never comes across as very 'presidential' to me. There's just something a little - dare I say it - dull about him? He was spectacular in Battle Los Angeles as a man in command, but in this film... there was just something lacking about him that I couldn't put my finger on. Still, I'd watch him read the phone book, so there's that.

Gerard Butler is the powerhouse in this one, as he should be. Very enjoyable watching him. He's a good actor with a good grip on his levels of intensity, so this was a good role for him.

Morgan Freeman... again, I'd watch him read the phone book, but he had too many moments of 'shock' and not seemingly in control of himself. Hard to describe, but he just had too many 'wide eyed moments' in this one. Still, he is always a pleasure to watch and always reliable.

It was great to see Ashley Judd for a few minutes in the beginning. I'd forgotten how much I liked her.

Angela Bassett is another actor I'd watch read the phone book. I'm in love with her in this role - she's perfect.

The rest of the cast is excellent, so this movie is worth a couple of hours of your time.
One person found this helpful

Rev. MuddyReviewed in the United States on April 2, 2017
5.0 out of 5 stars
One HELL of a GOOD..
Verified purchase
One HELL of a GOOD...NO, GREAT Movie. The action never stops...Gerard Butler is a MONSTER of an actor! I could have severed a steel bolt with my sphincter when the bad guys showed up to shred the White House with mini guns, kill everybody and kidnap the President. Gerard Butler takes this genre out past the next step of your every day shootem' Up, Save the world action hero flick.
Out into the land of EDGE OF YOUR SEAT from beginning to end.
17 people found this helpful

Killer Kitty 79Reviewed in the United States on September 8, 2018
5.0 out of 5 stars
Had A Blast Watching This!
Verified purchase
The best action movies I seen this year are the first two John Wick films and Atomic Blonde and somehow I missed this one and I'm glad I bought it.

When North Korean terrorists attack the White House with brute force and cause a massive massacre in DC. They captured the President and his staff with plans to invade South Korean and cause nuclear holocaust across American only one person stands in terrorist leader Kang's way. Mike Banning once part of President's Secret Service but after a car accident during a snow storm and failed to save the President's wife. Now it's up to him to save the President and stop Kang's plan before time runs out.

If you like Die Hard but want more hardcore action then Olympus Has Fallen has everything you want.
2 people found this helpful
See all reviews
Back to top
Get to Know Us
Make Money with Us
Amazon Payment Products
Let Us Help You
EnglishChoose a language for shopping. United StatesChoose a country/region for shopping.
© 1996-2021, Amazon.com, Inc. or its affiliates