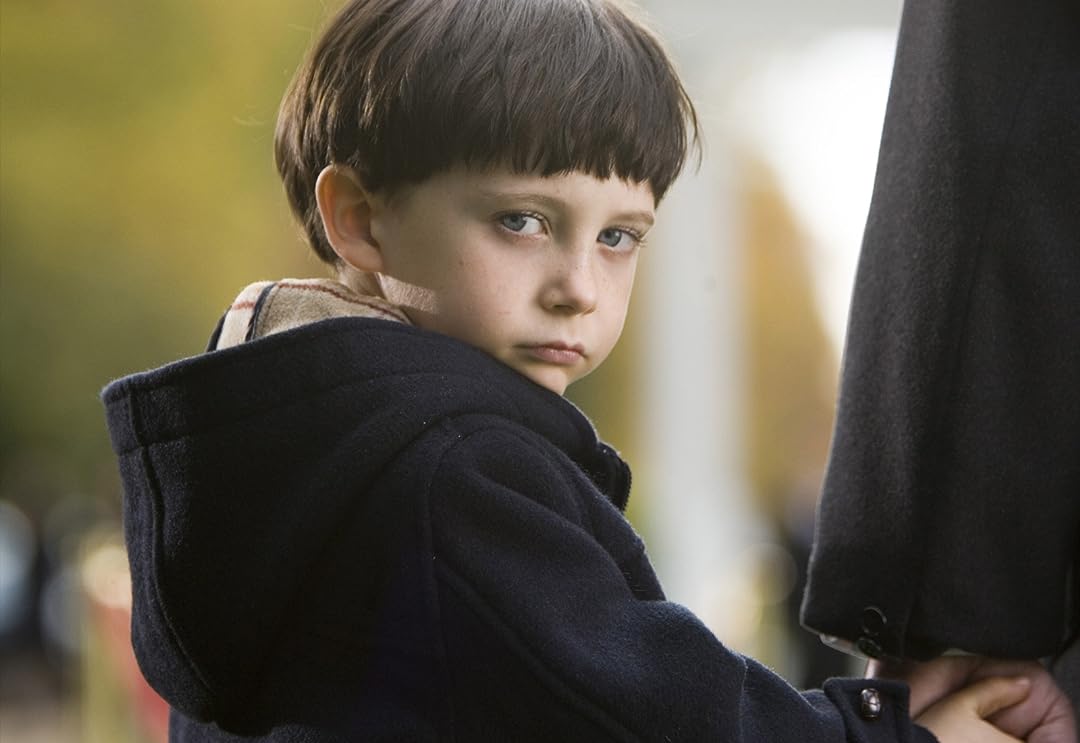 (992)
5.51 h 49 min2006X-RayR
When the U.S. ambassador to England begins to suspect that his son is the Anti-Christ, he must wrestle with the decision to kill the child before he can create a counterfeit kingdom on earth.

chaseReviewed in the United States on April 17, 2021
5.0 out of 5 stars
"I'm writing all of this review for you Damien!!"
Verified purchase
Creapy kid is Antichrist, parents are rich. May be a glorified origin story of our 45th president where they replaced greed with Demonic possession and Satanic agendas.
9 people found this helpful

ApathyCurveReviewed in the United States on September 26, 2021
5.0 out of 5 stars
Excellent
Verified purchase
Because I was raised in it, I am a sucker for horror movies based on Judeo-Christian mythology. While I stopped believing in my late teens, the psychological imprint it created in me as a child makes me vulnerable to the spine tingles when I watch a good horror show based on that mythos. The Omen and The Exorcist are my two favorites, and this remake does justice to the original. I normally approach re-makes with a great deal of skepticism, but in this case I was pleasantly surprised. They did not try to "re-imagine" the story, but instead stayed very close to the original, in many cases even using similar wardrobes and filming locations. The casting was spot-on and the cinematography well done. If you liked the original, chances are good you'll like this one as well. It's not original and doesn't try to be; it's more of an homage.
4 people found this helpful

Khristine JacksonReviewed in the United States on September 8, 2021
4.0 out of 5 stars
Same Old .. Same Old
Verified purchase
This is a "Re-make"... same old formula as before. The cast did a good job... It's just that the late "Gregory Peck,Lee Remick " and other's created a mold. Hollywood it's time to GROW up... stop remaking ... CLASSIC film's. Who are you fooling..? People born after 1990..? Wow...!! Friends it's important that you support all movie's... music and several forms of entertainment .. Just don't forget about the movie's that were ORIGINAL..
3 people found this helpful

EllisScottPollardReviewed in the United States on March 22, 2016
2.0 out of 5 stars
A Good Argument Against Remakes
Verified purchase
From what I gather, the marketing ploy of releasing this remake of The Omen on 6/6/06 was too good of a publicity maneuver to pass up for the studio. The movie wouldn't be so awful if they had in any way, shape, or form contributed something new other than the addition of some cheap scare tactics--most of which take the form of horrid looking masks (that don't add any depth to the story) or jump scares. The mystery of the original Omen is already revealed, so there is very little tension. What tension remains is, again, due to cheap tactics that don't revitalize or expand on the source material in any meaningful way. What kept me from giving this film one star were the performances given by David Thewlis (who occupies the David Warner role) and Mia Farrow (who takes on the Evil Nanny part played so well by Billie Whitelaw). The script is so poorly written that it's hard to know if Julia Stiles is giving a bad performance or if she's trying to salvage some depth from an already awkwardly written part. Liev Schreiber is absolutely awful, and that qualification isn't even taking into account a comparison of his part to Gregory Peck's performance in the same role.

I think the major problem lies in the conception and written execution of the story itself. At this point, we all know exactly what Damien is. In the original version, there was a slight air of mystery surrounding the child's origins and a great degree of detailed horror as the revelations were presented. To blandly reiterate the story without new angles or dimensions, that would maintain a degree of faithfulness but also expand upon a story with which we are all quite familiar, shows the film to be a very deliberate cash-grab. The direction adds nothing visually provocative. Aside from the superfluous addition of extraneous ghoulish imagery--which, had it been more relevant to the story, might not have seemed as gratuitously vulgar and pandering--the direction seems amateurish. For example, we aren't given a really lucid understanding of the mansion where the Thorn's live. While you could argue that this is to unsettle the viewer's sense of space, you need to have a certain pattern of setting in place so that the audience can actually be unsettled when the setting is changed. The direction also lacks any depth: everything is far too continuous well lit to the point that the obvious lack of thematic explorations is illumined by the visuals.

One final note about the performances: it is hard to sympathize with the plight of the parents because they never seem to exert any emotional attachment to their son or even give the audience a reason to care about their individual plights outside of their lives as parents. While Stiles's distance was an inconspicuous plot choice, and not really a good one, Schreiber relies on the dialog of his character to convey his internal conflict without actually putting any effort into creating an emotional connection; there is absolutely no continuity in his approach. Both of the leads are bad, but it does appear (and I use that word tentatively) that Stiles is at least trying. Schreiber is lucky in that his scenes are largely bolstered by Davis Thewlis's performance, which manages to be quite endearing. Mia Farrow's very convincing update of Mrs. Baylock is quite nuanced in many ways, but, and I really fault the writing here, she is written as more covertly evil without the subtlety. Given this, Farrow's performance can seem over-the-top and transparent at times. Still, she does great work with what she's given...to the point that you sympathize with her over Damien's dull, vacant, mostly unfeeling, and quasi-robotic parents.

The movie's a poor dilution with nothing new to speak of but the cheapest and shallowest contemporary horror conventions. I'm not opposed to remakes, but I find thoughtless attempts like this to be a transparent cashing in on a better film's legacy for nothing more than a profit.

h hansenReviewed in the United States on September 21, 2021
3.0 out of 5 stars
Not as good as the orginal.
Verified purchase
They likely had a hell of a time making this movie ;Get it? OK on to the movie. The original was able to generate horror and eeriness by the storyline and characters alone. This one needed some jump scares. The characters of the photographer and archaeologist who supplied the daggers were too lame in this version.
Of course there is a giant hole in this story. If the Catholic church/Vatican knew Damien was the anti Christ why didn't they kidnap him via Swiss Guard and take care of the matter themselves?
2 people found this helpful

PiwacketReviewed in the United States on October 5, 2021
1.0 out of 5 stars
What a stinker!
Verified purchase
These remakes of classic movies usually are bad, the kid was awful, just awful. The only bright side in the movie was having Mia Farrow in it. Of course, she was the mother of the devil in Rosemary's Baby - I wonder how many folks figured that out? I couldn't even watch it all is was so bad. Don't waste your time - if anything watch the original Omen not this trash.
One person found this helpful

Patrick L JamesReviewed in the United States on November 4, 2017
4.0 out of 5 stars
Pictures probably have bad marketing on their end
Verified purchase
First off right away I'm going to just say that when I realized that this is almost 12 years old and I went to see it June 6th 2006, the day it came out which, by the way I did not know that until after I saw the film people were offended that it was released on 666.. Pictures probably have bad marketing on their end.

Would I recommend this movie? Yes, I would I really really like it, I actually own 2 copies because when I worked at the video store that was in my town before it closed. I purchased the full screen edition on DVD because my flat screen along with purchasing along with 1 to 4 on VHS. So all in all a that would say I like the movie I really would recommend it
2 people found this helpful

R. BarnesReviewed in the United States on September 10, 2021
5.0 out of 5 stars
A Great Remake.
Verified purchase
I saw the first Omen over 40 years ago and although I usually don't like remakes, this one is an exception. Mr Schreiber, Sorry if misspelled. Did an excellent Job as Ambassador Thorne. Julia Styles was great also and what can you say about Mia Farrow. Always turns in a great performance. The Kid, "Damien" was more creepy than the original Damien. 5 Stars!
2 people found this helpful
See all reviews
Back to top
Get to Know Us
Make Money with Us
Amazon Payment Products
Let Us Help You
EnglishChoose a language for shopping. United StatesChoose a country/region for shopping.
© 1996-2021, Amazon.com, Inc. or its affiliates