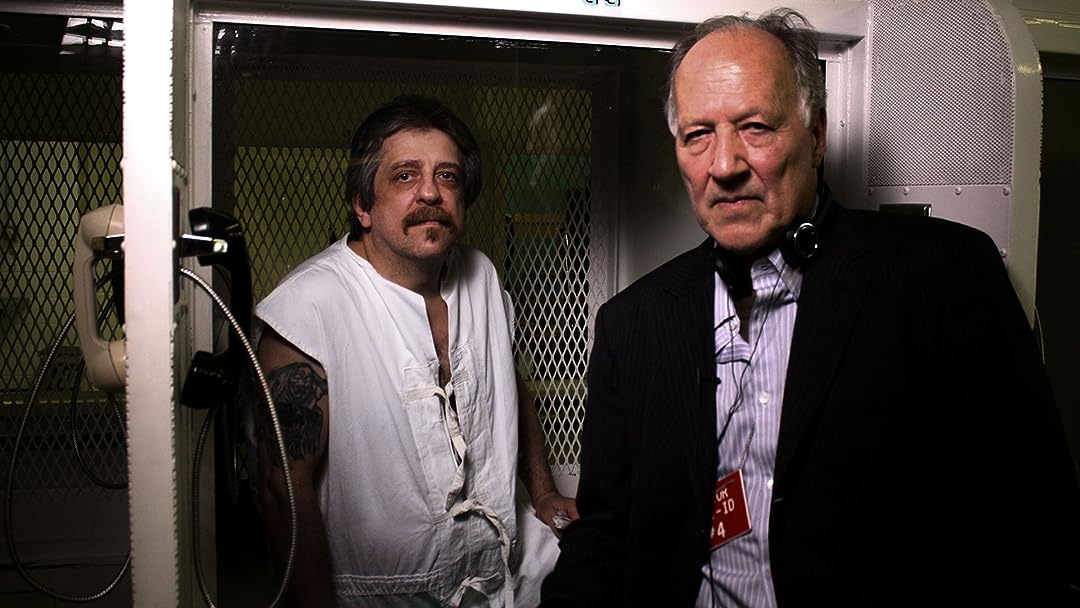 (35)
2012TV-14
An inside look at a maximum security prison in Texas featuring interviews with death row inmates.

TmcbroomReviewed in the United States on November 16, 2021
5.0 out of 5 stars
Purchase
Verified purchase
I love prime video , i buy all my movies.. and can down load them to watch any time, any where !!
No internet needed !!

patrickReviewed in the United States on March 27, 2021
4.0 out of 5 stars
Made me pro death penalty
I don’t agree with Hertzog, and after watching this I doubt many do. Still it’s a fascinating watch. The people he interviews are truly evil. They’re clearly guilty but still they’re allowed to lie and connive.
The first episode with Linda Carty is truly despicable. I couldn’t believe that her daughter parroted her mother’s pathetic story. Seems to me that the daughter has foreknowledge and should be locked up with her mother. The rest are all the same. Evil demons conniving to save their awful lives.

I’ve always been sort of ambivalent toward the death penalty. After watching this I can clearly see the need
7 people found this helpful

ConfederateReviewed in the United States on January 11, 2021
2.0 out of 5 stars
Good Series, But Hertzog Needs to Hone His Views
It's one thing that we have to listen to Werner Hertzog to impose his European view opposing capital punishment before every episode, but that he is so unmoved by the victims just makes those of us who favor it shake our heads. In the Book of Mormon, a man named Nehor slays an old war hero named Gideon. When brought before Alma, the chief judge of the people, he tells Nehor: "Thou hast shed the blood of a righteous man, yea, a man who has done much good among this people; and were we to spare thee his blood would come upon us for vengeance." So they took him to the top of a hill, where he confessed his crime and was put to death.

We owe the people who are left behind justice. There's nothing wrong with capital punishment as long as it's just and there are witnesses (people, DNA or other). In fact, I believe it's an obligation. But we put too many people on death row sometimes when the evidence is shaky. We have to be sure when we condemn others to prison or death. But when we are sure, we need to remember the victims and their families.
5 people found this helpful

kyleigh damasReviewed in the United States on February 9, 2021
5.0 out of 5 stars
Best documentaries regard death row, this & INTO THE ABYSS. Werner H. is a MASTER of DEPTH
Werner Herzog is a master. Certain comments show how ignorant many Americans are of his intelligence, honesty & message to/of humanity. He shows ALL sides with zero bias. He connects deeply with each person, treats his audience as he does everyone he interviews, with reverence and respect. Can’t recommend enough also “INTO THE ABYSS”. FYI WH documents the horrid crimes in details , honors the victims, both living and deceased. He speaks to all as human beings, even the guilty. For they, vile or not, are facing their pending death. DEEP.
6 people found this helpful

Bear1411Reviewed in the United States on January 14, 2021
1.0 out of 5 stars
DON'T WASTE YOUR TIME
First episode the narrator says he's against capital punishment right off the bat. You can guess from there where the rest of the episode is heading. There's overwhelming evidence this lady killed an innocent woman and stole her baby. She was tried and convicted in a court of law. Of course, now there's a pie in the sky story her lawyers have concocted that not only says she's innocent but was framed by the DEA. Give me a break! Outside of the narrator having a creepy Arnold Schwarzenegger accent it's painfully obvious he sympothizes with this psychopathic killer and has little regard for the suffering the victims as well as their families have indured. The narrator needs to focus his expose journalism in Germany where you can kill a hundred people and not have to worry about the death penalty.
7 people found this helpful

ignacio f.Reviewed in the United States on June 15, 2020
5.0 out of 5 stars
Just an excellent show.
The first subject Herzog interviews, Linda Carty, claims to be innocent, but the more she talks the more plain it is that she's just repeating and elaborating lies. The other death row inmates interviewed admit their crimes, and it's possible almost to like them on some level as a result. They don't seem to be stupid, yet they committed what sound like stupid crimes. Herzog's interaction with them is fascinating.
5 people found this helpful

Ender Wiggin, FLTADM (ret)Reviewed in the United States on June 20, 2021
3.0 out of 5 stars
Everybody is lying
I love Werner Herzog but in my own personal opinion Episode 1 of this series was more garbage collecting and less filmmaking. Everything Carty says is a Junkie fairy tale. The daughter is some kind of brainwashed to parrot it. If you ever want to see a liar who has had decades to practice as well as a dumb person repeating lies on camera with the subconscious realization of the truth... this is your episode. Otherwise pass on this whole series.

Apparently while shooting season 4 the director woke up screaming one night and ended the show. This is because IMO he had a fundamental conflict between his 'dislike of the death penalty' and the very real evil he saw in his subjects day in and day out. It's probable that Werner not only changed his mind about the justice of their fate, but actually wanted to kill them himself because it was 100% justified.
One person found this helpful

beck61Reviewed in the United States on February 5, 2022
5.0 out of 5 stars
Not the average prison show
Wener Herzog is a German film-maker and a fabulous interviewer and his documentary examines individuals who have been convicted of capital (death penalty) cases. Season 1 shows conversations with 4 people living on death row awaiting execution, or in an unlikely case, a stay of execution and further investigation of their claims of innocence. Each convict fails to take resonsibility for his or her actions, but what caught my interest the most is that they are for the most part articulate and well-read. I'm sure these things happened in prison, but watching this, I realized that they could be met on the street and not show any differences between them and your next-door neighbor. Mr. Herzog tends to keep the interview narrowed to their crimes and not their histories, childhoods, etc. I thought it was fascinating, and hopeless. That's the feeling you get from watching these people describe their side of the story (which is generally very slanted towards their having gotten thrown into a bad situation) and the realization that they're going nowhere forever.
It beats the average prison documentary which examines a whole prison. This examines a whole prisoner.
See all reviews
Back to top
Get to Know Us
Make Money with Us
Amazon Payment Products
Let Us Help You
EnglishChoose a language for shopping. United StatesChoose a country/region for shopping.
© 1996-2022, Amazon.com, Inc. or its affiliates