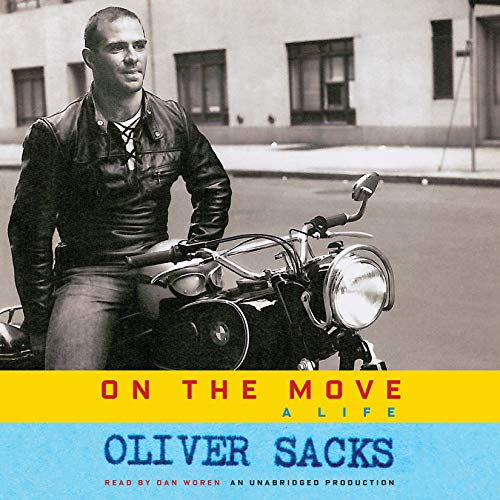 On the Move: A Life

List Price: $31.50
You Save: $4.51 (14%)
By completing your purchase, you agree to Audible’s Conditions Of Use
Sold and delivered by Audible, an Amazon company
Share

4.5 out of 5 stars
4.5 out of 5
1,092 global ratings
How are ratings calculated?
To calculate the overall star rating and percentage breakdown by star, we don’t use a simple average. Instead, our system considers things like how recent a review is and if the reviewer bought the item on Amazon. It also analyzes reviews to verify trustworthiness.

katarinaism
5.0 out of 5 stars and the like. To read Sacks' account of what motivated him ...
Reviewed in the United States on July 9, 2018
Verified Purchase
A poignant, powerful memoir of Sacks' life and the line between the humanities and the sciences that he so elegantly balanced his life's work upon. This is my second of Sacks' books that I have read ('Migraine' was the other, though I own them all and plan to read them), and it walks the reader through his life - from his childhood in England, to his coming-of-age and sexual awakening, to his motorbike-riding days in residency in San Francisco and the subsequent career for which most of us know him.

As a migraine sufferer, I too was both frightened and fascinated by my visual auras. I always felt a little crazy admitting or describing them, until I picked up Sacks' "Migraine" in high school and flipped through the pages upon pages of elegantly drawn visual auras and the accompanying descriptions. As a med student, I was impressed by Sacks' ability to write popular science books in the field of neurology, a skill which perhaps is only rivaled by those greats such as Steven Hawking, Isaac Asimov, and the like. To read Sacks' account of what motivated him to write the book and the challenges he faced in doing so only made me appreciate it more.

As a neurologist, I found a lot to relate to here: particular passages of interest were his approach to migraines, and his feeling as though he was "not like a super-specialist in migraine but like the general practitioner these patients should have seen to begin with. I felt it my business, my responsibility, to enquire about every aspect of their lives." Any neurologist who cares for migraine patients would relay the complex entanglement between sleep, stress, caffeine habits, and medical comorbidities to patients' migraine disorders. He also writes eloquently and relatably about the intersection between neurology and psychiatry and the importance of realizing a holistic, multifaceted approach.

But most of all, what I enjoyed about this book, was that it tears down the stereotypes of what a traditional 'neurologist' is. Many of us have the picture of the neurologist as the straitlaced, nerdy physician with the briefcase full of tools and a very bookish approach (and I am a neurologist). The image of the artistic, motorbike riding, poetry-appreciating young neurologist with a rebellious, inquisitive streak is satisfying because it shows who a neurologist can be -- an artist, a bodybuilder, a traveler, a writer. Sacks' memoir paints the picture of a life well-lived, well-enjoyed, and well-spent; he spent his life not dwelling on limitations of science but savoring scientific inquiry, by pursuing purpose and possibility. I hope his book inspires the artists to appreciate the beauty and subtlety of science, and the scientists to appreciate the emotion and abstraction of art. It certainly inspired me.
Read more
11 people found this helpful
Helpful
Report abuse

Christopher
5.0 out of 5 stars 'On the Move' is a "moving" masterpiece.
Reviewed in the United States on May 4, 2015
Verified Purchase
I fell in love with Oliver Sacks and his writing after my parents gave me "The Man Who Mistook His Wife for a Hat" this past Christmas. Ever since, I've been hooked and can't get enough. I've now read "Hat", "Hallucinations," " Musicophilia," and now his autobiography. His writing is so elegant yet lucid, that it feels as though I'm reading fiction at times. This new book of his is no different, and may perhaps be the most fascinating of them all.

To say that he has lived life to the fullest would be a severe understatement; he has filled his life with enough adventure and excitement to occupy four lifetimes, and he is still going (and may he continue to do so for many years, in spite of his cancer). His openness and honesty in "On the Move" is spectacular, moving, and one feels as though he is having a fireside conversation with Sacks himself. There is so much I never knew about him, so much that I almost found hard to believe! (You'll understand this as you read through the book). What a man, what a life!

As a student who will be starting his first year at medical school this August, I can say that I aspire to be half the man that Oliver Sacks has become. He is part of the reason that I have fallen even more in love with the medical field, particularly neurology and psychiatry. There is much to learn from this book, regardless of one's profession, interests, and background. There is so much more to say, but I'm no wordsmith as Sacks is, so I'll let you read it for yourself. It is my hope that you enjoy every page, sentence, and carefully crafted word that Oliver Sacks has used to print his life onto paper. As Albert Schweitzer said, "my life is my argument," and no doubt Sacks will embody this message until the end.
Read more
152 people found this helpful
Helpful
Report abuse

Lee L. Lanza
5.0 out of 5 stars Wonderful autobiography.
Reviewed in the United States on May 5, 2015
Verified Purchase
Both this and the earlier volume (Uncle Tungsten) are excellent autobiographies by Oliver Sacks. You would not have guessed from reading his books about neurology that he was a biker and weight lifter in his wild younger years, and also an experimenter (on himself) with drugs. He has described his shyness and a sense of a barrier between himself and others. But his autobiography is uncommonly open and self revealing. His writing made him famous and On the Move recounts his friendships with other famous people (Francis Crick, Robin Williams, etc). It is not stated in these books, but I would guess his friends and acquaintances found Dr. Sacks quite interesting and original. I hope one or more of those friends who are still with us might share their observations of this remarkable humanist/scientist.
Read more
21 people found this helpful
Helpful
Report abuse
See all reviews

Vicuña
5.0 out of 5 stars An extraordinary man who lived life to the full. One of the best autobiographies I've read.
Reviewed in the United Kingdom on July 1, 2016
Verified Purchase
I must confess to having enjoyed everything I've read by Oliver Sacks. He writes about disease and neurological impairment in a way that's interesting and easy for a lay person to understand. I was sad to learn of his own illness last year, which finally claimed him and I was looking forward to reading this. What an amazing individual and this is possibly one of the best autobiographies I've ever read.

He writes in a way that's immediately engaging and the reader is drawn in to the excitement of his life. I had no idea that he'd done so many extraordinary things and I'm delighted that he lived life to the full ( and occasional excess) in every way. It's quite an emotional roller coaster at times, both professionally and personally. Here was a man prepared to take risks and by and large they paid off. The world is a poorer place without him.
Read more
16 people found this helpful
Report abuse

Mrs. K. A. Wheatley
5.0 out of 5 stars A fascinating peek into the life of an extraordinary man
Reviewed in the United Kingdom on April 18, 2017
Verified Purchase
A gripping story of an extraordinary man's extraordinary life. The narrative tends to flit around a lot which I found a bit disconcerting at times, but once I'd gotten used to it I relaxed about it. As it was all fascinating that helped a lot. What I really enjoyed about this book apart from discovering more about Sacks himself, was learning about his quite astonishing family as well. His parents sound like amazing people and even his wider family are fairly awe inspiring. I was particularly interested to learn about Sacks' younger brother and his mental health problems. You can imagine how hard it would be to be in that kind of mental space in a family of eccentric characters in whom intellect was such a prize. I was devastated to get to the end of the book. I wanted more.
Read more
5 people found this helpful
Report abuse

ACB(swansea)
5.0 out of 5 stars Oliver Sacks - Always On The Move
Reviewed in the United Kingdom on July 13, 2015
Verified Purchase
Oliver Sacks is an individual who has determined his own destiny. His upbringing within a medical environment led to his statement, "By the time I was fourteen, it was 'understood' that I was going to be a doctor", following his parents and elder brothers. Whether it was his chosen route in life he has doubts, but his eventual medical career as a neurologist is one of eminence with a way of explaining the intricacies of the brain that appeal to laymen and fellow professionals. The pulling-power of this autobiography is Oliver Sack's honesty expressed though his experiences. His writing has always been fluent. He details his love of motor cycles, swimming and body building, his sexual orientation that he and his parents were aware of when he was twelve, later graphically exemplified by his experiences in Amsterdam and Hampstead.

Oliver Sacks never seems to have taken life lying down. Despite his dedication to his distinguished medical career, he has managed to embrace himself as a self-confessed 'field-worker', a man who is constantly striving to fit his and other human behaviour within his professional knowledge and experiences as a 'brain doctor'. This is a forthright and honest autobiography written by a man who has an audience and who has lived life to the full. His terminal disease makes this even more compelling. A book that is as pleasurable and interesting to read as its author intended. Full of revelations and humanity, it is highly recommended.
Read more
9 people found this helpful
Report abuse

Michael Jones
4.0 out of 5 stars Sachs comes across as a sweet, caring
Reviewed in the United Kingdom on October 1, 2016
Verified Purchase
Winner of the 'hottest-young-scientist-on-a-motorcycle' award, 1966 (not many contenders, I suspect, but he certainly aced it). Sachs comes across as a sweet, caring, insecure, empathic, insightful and engaging person. Deeply shy but with an empathic drive to connect with and understand his patients and with a burning desire to produce strong, well regarded work. Interesting to read about his extensive periods of drug use, the highs and lows. Charming, vulnerable and 'flawed' - I have some reservations that he holds back on the full picture - that there's a lot more to tell. But this is an engaging, wide-ranging series of snapshots of a life lived to the full.
Read more
2 people found this helpful
Report abuse
See all reviews
Back to top
Get to Know Us
Make Money with Us
Amazon Payment Products
Let Us Help You
EnglishChoose a language for shopping. United StatesChoose a country/region for shopping.
© 1996-2021, Amazon.com, Inc. or its affiliates