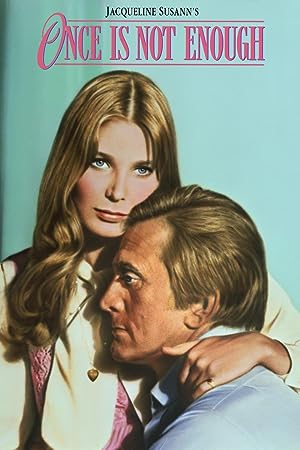 Once is Not Enough

(196)
4.62 h 1 min1975R
Kirk Douglas plays a Hollywood mover and shaker who realizes he can cozy up to a motherlode of cash by marrying one the world's richest women (Alexis Smith). The marriage unsettles the lifestyle of the mogul's adoring daughter (Deborah Raffin)-and sets in motion a whirlwind of personal and romantic repercussions in his own glamorous world.

From NJReviewed in the United States on September 27, 2021
5.0 out of 5 stars
Mindless Fun Then; Mindless Fun Now
Verified purchase
Read OINE back in the day when I was in high school and, like so many others, loved it...trash :) an all. Worked (briefly) for Gulf+Western at Columbus Circle when the movie was coming out and recall every elevator floor's opening (I was two stories from the top) revealed movie posters of their current releases. Saw the movie (I was more than likely reading Fear of Flying in paperback by then) and loved it too.

Not sure how I stumbled upon this on Amazon Prime, TBH, but I did, and do not regret my rental. Didn't recall any actors besides Deborah Raffin, so I was surpised to see Douglass, Janssen, Hamilton, Vaccaro, Conway, and Mercouri.

Watched this 3 times within my Prime window. Great drama? Of course not. If you're, however, reading this review...rent it too...you know you want :) to.

DocReviewed in the United States on January 24, 2022
4.0 out of 5 stars
Not Great, but Much Better than Expected
Verified purchase
Having never read the book, and only going off reviews, I expected the worst from this film. I only watched it to see Brenda Vaccaro’s Oscar-nominated performance, and she was definitely the best part of the film. I admit, overall the film wasn’t that bad, and had some good plot twists and decent acting (Alexis Smith was great as well). The pacing was strong at first, but lost steam with the introduction of David Janssen’s character halfway through. Thankfully Vaccaro was in more scenes than I expected, which help the movie a great deal. Fun flashbacks of the mid-70s in the music, furnishings, and clothes. Worth watching.

Aviator123Reviewed in the United States on January 21, 2015
5.0 out of 5 stars
Timeless Classic
Verified purchase
This movie was ahead of its time. It touched on a role reversal of a man relying on a rich woman and sacrifices he made for his only daughter. This movie also touched on bisexuality of a wealthy woman that could have anything she wanted but choose to maintain the status quo. This movie shows the importance of money and status; as well as, the pressure to maintain a high lifestyle. The role of African Americans in films has advanced but great to see the black maid in this film treated like a close trusted friend. All of the actors did a brilliant job and this awesome movie will live on forever. RIP Deborah Raffin (January), Alexis Smith (Deidre), David Janssen (Tom Colt), Lillian Randolph (Mabel), & Melina Mercouri (Carla...Deidre's lesbian lover). Kirk Douglas (Mike), Brenda Vaccaro (Linda), and Gary Conway (Hugh) are still blessed to be here.
9 people found this helpful

George Thanos AssimakisReviewed in the United States on February 28, 2011
4.0 out of 5 stars
An interestin film at last on DVD
Verified purchase
I had been waiting for this film to appear on DVD for quite some time. I was forced to buy the video version, sometime ago and now I am very glad I can watch it in DVD quality.
I first saw the film in 1075 when it was newly released. I was really taken by Deborah Raffin at the time, who after all is the protagonist even though her name appears way down the list of credits. 36 years latter, I still like her, but in a very different way. The rest of the cast are all right, nothing special. The scenario is interesting and keep you going to the end, but with no great suspense. On the whole, a good film, worth viewing.
One person found this helpful

Patrícia Rocha dos SantosReviewed in the United States on May 26, 2014
3.0 out of 5 stars
The "unhappy end"
Verified purchase
I bought this DVD especially because of the actor Gary Conway. I've been his devoted fan since his TV series "Land of the Giants". I thought the movie was okay with a special and talented cast, but I was sincerely expecting a "happy end" for January, with someone who really loved her, in this case, Gary as Hugh! This was so clear at that scene on the beach, when she talks "smiling" about being a lover, and about him only as a friend, and he looked at her so disappointed, but still gentlely! They deserved it, but that was my wish! I would love to see them together! Unfortunately, Gary in fact, almost doesn't appear (very little), and besides that, it wasn't so easy to watch the movie without subtitles in Portuguese (what I already knew, being for Region 1), or even in English (what I didn't know), because I'm Brazilian. Something I just can't understand is the reason why all the movies don't have also subtitles in other languages, at least Portuguese, Spanish or French, and why aren't they for "All Region" (what is another problem). English is the universal language, but it isn't the native one in all countries of the world, who also deserve the chance to watch good movies!

DesdemonaReviewed in the United States on February 20, 2000
5.0 out of 5 stars
STILL A GREAT MOVIE!......25 YEARS LATER!
Verified purchase
I give this movie 5 stars because when I first saw it, I was a VERY young girl, and it left a lasting impression on me as being a very good movie. Being a young girl at that time, it had enough drama and sex, to keep this movie in my memory all these years. I was surfing for drama films, and this film popped into my head! I performed a search, and there it was!. If you take it as a movie made during the times of the "70's", and not judge it by today's movie standards, you will enjoy it. This movie will be in my collection for a long time to come.
7 people found this helpful

Jean Reviewed in the United States on January 19, 2022
5.0 out of 5 stars
Ending different than the book. Ok though.
Verified purchase
A lot of big name stars. By today’s standards would be rated pg.

alieReviewed in the United States on August 31, 2018
5.0 out of 5 stars
Gracias quality of movie. Nostalgia of younger nights for me.
Verified purchase
Great quality and clarity for an old movie. This brings me back to simpler times with friends at a drive-in. Love the story and the quality of the pictures
2 people found this helpful
See all reviews
Back to top
Get to Know Us
Make Money with Us
Amazon Payment Products
Let Us Help You
EnglishChoose a language for shopping. United StatesChoose a country/region for shopping.
© 1996-2022, Amazon.com, Inc. or its affiliates