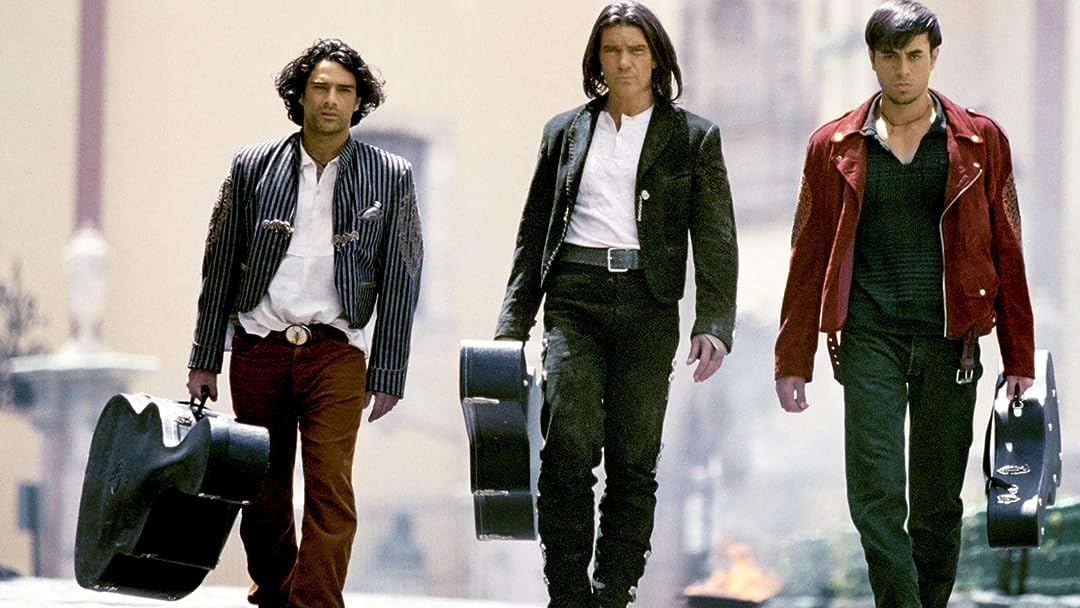 Once Upon A Time In Mexico

joel wingReviewed in the United States on April 13, 2020
5.0 out of 5 stars
El Mariachi is going to save Mexico from the Americans drug bosses and the army
Verified purchase
Once Upon A Time In Mexico was director Robert Rodriguez’s conclusion to his Mariachi series. It took off where the last film Desperado left off and went with more action, more comedy, more drama. The main story was about preserving Mexico in the face of the devious Americans, ruthless drug bosses, and power hungry generals.

The mix of action and comedy is right at the start. A source named Belini (Cheech Marin) is telling CIA agent Sands (Johnny Depp) about El (Antonio Banderas) and his standoff with General Marquez (Gerardo Vigil). As the two confront each other, a little bar on wheels scoots out of the way to avoid the shooting that’s inevitably going to break out. El breaks out a guitar instead and begins playing like crazy, but it turns out to have a machine gun and a grenade launcher inside of it. That turned out to be an embellishment, so the story continues with El having regular guns on him, which he uses against the general’s men. Then She (Salma Hayek) arrives. The bar on wheels then scoots back out because the bar tender wants to get a look at how beautiful She is. Then the fighting starts all over again. The story is also integral to the plot. Agent Sands wants to hatch a coup in Mexico because that’s what the Americans do using El, General Marquez and a drug boss named Barillo (Willem Dafoe). Add to that She and the president of Mexico (Pedro Armendariz) and you have the story of how El Mariachi was going to save Mexico from dastardly plots both foreign and domestic. The light-hearted action and gun play would also be mainstays. That’s Once Upon A Time In Mexico in a nutshell. It's one of Rodriguez's best movies and by far the standout of the 3 part El Mariachi series.
C

SeductiveScorpioReviewed in the United States on February 29, 2020
1.0 out of 5 stars
Watch it before you buy it, or you may be disappointed.
Verified purchase
I felt like this movie was a disappointment compared to Desperado. The story wasn't interesting and I felt like the performances by the actors were not the greatest. Cheesy is the word that comes to mind when describing this movie. This blu-ray was not worth the $14.99 I paid. Others may think this movie is alright, but I suggest watching it for free before deciding to invest in the blu-ray.
4 people found this helpful

Herman AutoreReviewed in the United States on August 25, 2018
5.0 out of 5 stars
Must watch for fantasy action fans
Verified purchase
It's cool to see Depp before his "Pirates" career, although his performance sucked in this movie. He was probably concentrating too hard on his American accent and couldn't work on giving it character. The rest of the movie was pretty good. I liked the happy ending for all parties, although Depp's character could've lost a few extra body parts. He deserves worse for killing civilians and being a horrible person. The movie has a bit of the fantasy violence vibe from Tarantino's movies, except it's not a mind-numbing gore-fest. It's a fairy tale with guns and spies.
3 people found this helpful

The BearReviewed in the United States on January 20, 2014
5.0 out of 5 stars
One of Robert Rodriguez's best films.
Verified purchase
And that's saying a lot. This film has no lax moments. The writing, directing and acting are all tightly woven into a very exciting piece. Antonio Banderas (I have to admit, he's one of my favorite actors) is wonderful. Johnny Depp is wonderful as well and provides occasional much needed comic relief as the American CIA agent in Mexico who does NOT speak Spanish. His role is replete with irony, mostly based on his assumption that a) he has everything under control and b) that he is the one to provide 'balance' to Mexican politics. Danny Trejo has an expanded role in this film -- his was very brief in 'Desperado' -- and he fills it commendably. Salma Hayek's character only appears in flashbacks of 'El Mariachi', but the footage is entirely new; there are no (or at least very few) flashback that go all the way back to 'Desperado'. I've never seen this device used before, especially not to the degree that the character fills in gaps between the two films, but is never part of the main action. She's just as important to the story and provides a revenge motivation for "El Mariachi".

Ron BlachmanReviewed in the United States on November 26, 2021
2.0 out of 5 stars
Good cast - incomprehensibly bad script
Verified purchase
The cast here is so good that it becomes a liability - the producers have to use everyone and that results in a jumbled up script written only to gve actors scenes but not to tell a story. This is about as bad as screenwriting gets in a high-budget film.
One person found this helpful

KevinReviewed in the United States on May 15, 2021
5.0 out of 5 stars
The Third Film in the Mexican Trilogy!
Verified purchase
The third and final film in Robert Rodriguez’s Mexican trilogy, which started with his debut film El Mariachi, and continued with Desperado. You can buy those together in a blu-ray 2 pack. This is the finale, Once Upon a Time in Mexico! With an all star cast featuring Antonio Banderas, Johnny Depp, Selma Hayek, Eva Mendes, Mickey Rourke, Willem Dafoe, Cheech Marin, and of course Danny Trejo! Special features include a commentary, deleted scenes, and more.

cookieman108Reviewed in the United States on February 6, 2004
3.0 out of 5 stars
Agent Sands: Are you a Mexi-CAN or a Mexi-CAN'T?
Verified purchase
In Once Upon a Time in Mexico, writer/director Robert Rodriguez (Desperado, Spy Kids, From Dusk Til Dawn) revisits characters he created and introduced with the low budget, but highly enjoyable, 1992 release of El Mariachi and followed up on in 1995's Desperado.
Antonio Banderas returns as El Mariachi, reprising his the role from Desperado that made him a name in Hollywood. Also included is Selma Hayak as Carolina, Johnny Depp as the corrupt CIA operative Agent Sands, Willem Dafoe as a cartel drug kingpin Barillo, Mickey Rourke, Eva Mendes, Enrique Egelsias, Cheech Marin, Ruben Blades, and character actor Danny Trejo.
The plot, as I understood it, involved a complicated scheme to overthrow the president of Mexico, and who would end up assuming power in the vacuum that follows. Agent Sands was particularly involved in this, seeming to work both ends for his own profit. El Mariachi is recruited by Sands to eliminate the general hired by the leader of the drug cartel to assassinate the president. The reason Sands contacted El Mariachi for this is due to a past, unresolved conflict between El Mariachi and the general. Sounds complicated? At some point, you may have to just go along with the movie, accept all the little subplots, and enjoy the ride. And a fun ride at that.
The action is wonderful in this movie but scenes choreographed and shot beautifully, with associated scenery adding real texture and depth to the proceedings. The characters, especially Agent Sands (Johnny Depp) are fun to watch, and the bullets do fly. Explosions, bodies flying, action flowing in and out...there are few dull moments in this film.
The main problem I had with the movie is the plot just got too convoluted. With the number of characters running around, the character of El Mariachi seemed be relegated to a secondary plot thread at times. Maybe this was the intention, but having seen the two previous movies in this series, I think he should have had more screen time. And some of the scenes cut out but put into the deleted scenes section would have helped in some cases to keep the flow of the film moving. There was one scene, where Agent Sands is wearing a really bad fake moustache, and then the following scene he doesn't have it on...a deleted scene shows what happened to it, but had it been left in the movie, it wouldn't have created this minor gap that only served to bring me out of the movie. One minute moustache, the next, no moustache...not a big deal, really, but this happened a couple of other times. Also this movie seemed to lack the chemistry created in Desperado between Antonio Banderas and Selma Hayak. You'll understand more if you watch the movie, as I don't want to give away too much, but their relationship seemed glossed over, probably due to the inclusion of other elements.
The movie looks wonderful, and there are scads of extras in this movie, and they are listed on the product page, so I won't get into them. All in all, a fun, flamboyant, action filled movie with beautiful scenery that got tripped up a little on its' various subplots, losing the viewer in the process at times.
23 people found this helpful

Joanne CampbellReviewed in the United States on February 7, 2018
3.0 out of 5 stars
Weird film - good cast.
Verified purchase
Weird and choppy. Too many characters with mixed agendas. Depp's character is a somewhat insane CIA agent who gets his eyes plucked out and still runs around with heavily bleeding eye sockets trying to effect his cause - whatever that is. Very violent and bloody - but a good cast. I'll watch it again when I'm in the mood for "strange".
4 people found this helpful
See all reviews
Back to top
Get to Know Us
Make Money with Us
Amazon Payment Products
Let Us Help You
EnglishChoose a language for shopping. United StatesChoose a country/region for shopping.
© 1996-2022, Amazon.com, Inc. or its affiliates