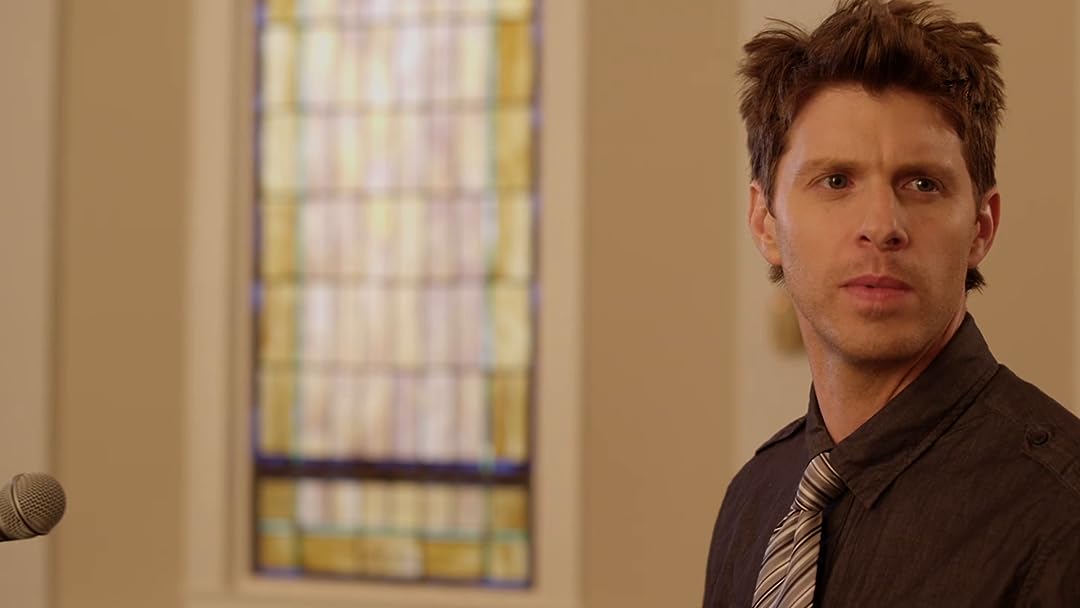 (57)
5.81 h 49 min201613+
When a national tragedy turns into a personal vendetta for aspiring politician Cornelius Barlow, religion comes to the forefront of public debate. Families are divided, churches are closed, and lives are even lost in the battle to reclaim the most important message ever told. God shows up in big way by using the most unlikely people to defend His church.

Fun2ShopReviewed in the United States on October 6, 2020
5.0 out of 5 stars
Message of the cross needs to be preached! Movie depics what the godless are trying to do!
Verified purchase
There is only One way to an Eternity in Heaven and that's through Christ! May people get their heart right with the Lord today. "For there is one God, and one mediator between God and men, the man Christ Jesus; ' 1Timothy 2:5 KJV
20 people found this helpful

Blessed with graceReviewed in the United States on November 14, 2020
4.0 out of 5 stars
I will statements like the Antichrist will start out as & how the left tries to do
Verified purchase
This is much how the antichrist is supposed to do -- one church -- with one difference it will be like the left is trying to do, everybody but the true Christian that goes by the book (which may fall in many denominations). The antichrist has 5 "I will" statements in scripture & persecutes people who try to live by the scripture instead of by religious rules. Jesus said there are many antichrists so this is an example of how that could play out & if you think about it in many ways did-if you were awake enough to see it. The final antichrist will move quickly though. He will be young, known as the Assyrian, come out of Rome, have a darkened right eye, a shriveled right arm, hate Israel but rule it, hate women, outlaw marriage, and proclaim himself to be God. The final antichrist will persecute Christians and force believers to deny Christ and take a mark or die -- it's better to die & live eternity with God than take it and suffer and burn in hell. Also, the christians who manage to evade him are spared the plagues. When a person dies, they close their eyes and open them to be with the Father -- that quick. To die in Christ is gain, but we live to fulfill our purpose until our appointed time. We tell others so everyone has had the opportunity should they choose to accept or reject. It is knowing your scripture that saves you -- never some man or religion. It is scripture that made us free in the USA & any people that know their scripture cannot be enslaved. It was the original reason we had public schools and the only book that was originally allowed -- the King James Version that was written on a 6th grade reading level that most adults cannot read today. That is how far we have fallen. There was a huge court battle to get any other books in. David Barton has the documents to prove this. The other things I said are straight out of scripture. So, do you know that a perfect God gave up his throne to come live a hard, humble, miserable life but without sin to pay for your sins past, present, and future? He took your place on the cross so that you might be saved from a death that Satan deceived us into. God is pleading that you be reconciled to Him and simply read His love letter to you and accept the sacrifice He made in the flesh so that we might live. Right now until 1 Corinthians 15:51 & 1 Thessalonians 4 is an age of grace. Romans 10:9 says we simply have to confess with our mouths and believe in our hearts to be saved from the 7 years of Trouble spoken of by the book of Daniel. A New King James Bible is easy to understand & has the least mistakes per the translators. Hurry friends! Fill your vessels with oil, the bridegroom comes soon & we are to be ready and waiting.
14 people found this helpful

Johnathan MorrisonReviewed in the United States on May 17, 2021
5.0 out of 5 stars
1 Timothy 2:5 For there is one God, and one mediator between God and men, the man Christ Jesus;
Verified purchase
It starts out a little awkward because it focuses on a heretical teacher, but then towards the middle and end it is more obvious that the purpose of the movie is not in favor of universalism or secular morality but actually that Jesus is the one true way and the world often tries to take God & Jesus & the Holy Spirit out of religion and just pushes good morals and prosperity as though humans can be good without the One True God - which is not true.

The gospel is that although we have all sinned and deserve eternal punishment, God sent His only Son Jesus to live a perfect blameless life and be given as sacrifice that we might have eternal life but only through trusting in Him and following Him as our Lord.

His teachings and His laws are also important, but believing in those teachings alone or ourselves alone is not enough and we don't have power in ourselves apart from Him to do good. But when Jesus returned to heaven, He left us the Holy Spirit to lead us and give us power over temptation and sinful nature.

The movie stresses the importance of a relationship with God through His Son Jesus Christ (Who is also God); as well as the importance of Biblical teachings. As with many theologically sound movies, the acting and plot and production weren't exactly Marvel movie quality, but that's not why I watch/ enjoy this kind of movie anyway.

MichaelReviewed in the United States on October 8, 2020
2.0 out of 5 stars
Missed opportunity
Verified purchase
I was so disappointed for the first half of the movie. Asking myself “what did I get myself into” and “Are they going to turn this around and share the gospel?”
Too much time was devoted to the idea of “one church” and all the build up around that. When they finally got around to sharing the gospel it was really short and a surprisingly weak ending. The acting is bad, like most low budget Christian films and there was something going on with the sound like there may have been some cheap voiceover in a few places.
Missed opportunity because I can see so clearly how it could have been better in so many ways
6 people found this helpful

Markey_markReviewed in the United States on August 22, 2021
3.0 out of 5 stars
The Catholic Church is the original One True Church Founded By Christ
Verified purchase
For those who have been told differently and (I almost guarantee it) believe that thousands of demonations make up the One Church, I have this message: Jesus instituted HIS Church, who can only be ONE; "One Lord, One Faith, One Baptism, One God and Father of All" can have ONLY One Body; Only One Bride. Just read Matthew 16:16, 18:16-18; John 20: 19-23 * [Jesus] said to them again, “Peace be with you. As the Father has sent me, so I send you. And when he had said this, he breathed on them and said to them,m “Receive the holy Spirit.Whose sins you forgive are forgiven them, and whose sins you retain are retained.”
Everyone validly Baptized is a member of His One Church. The "non-Catholic" (indeed all the baptized are Catholic [universal]) has much to learn and sooner or later find out that there is much more to TRUTH than the truth they have been following.
Peter was the first Pope, the other eleven were the first Catholic Bishops and the Apostle Paul, Timothy and Titus were also Catholic Bishops.
The first thing this "Paul" would have asked is "Where can I celebrate Mass?"
Does this interest you? then DUCK-Duck-Go search: Dr. Hahn’s conversion story, conversion stories of others,
approaching the Catholic faith at the Coming Home Network
2 people found this helpful

RichelleReviewed in the United States on November 5, 2020
4.0 out of 5 stars
Wake up
Verified purchase
An eye opening message that brings to light things we are currently facing today. Open heresy and government overreach in the sheepskin of unity. There’s some great dialogue in this film such as “unity is not always uniformity”. Modern suppression of religious freedom doesn’t look like religious suppression of the past. It along with other pressing issues today will instead be ruined under the sheepskin of “tolerance, equity and unity”. If you want to create division attempt to force people to be the same!
Christ saves not Christians, so softening the Gospel in the name of unity and tolerance is what has gotten us to this state of a nation where morals are all but diminished.
Acting and production of this movie will keep it from getting to all that need to hear it but the dialogue and ideology is sure to change some lives.
9 people found this helpful

e4eq8qReviewed in the United States on October 18, 2020
5.0 out of 5 stars
powerful message to be aware of
Verified purchase
there is a big message in much of the so-called Christian church that is false. Preachers teach things that tickle peoples' ears, telling them what they want to hear rather than the truth they need to hear. Who wants to hear truth though, that's no fun! Actually, truth from the Bible received and lived out with fear and trembling is lasting fun and relationship with GOD eternally, starting now.
9 people found this helpful

JohnRWReviewed in the United States on December 18, 2020
1.0 out of 5 stars
Good Message, Horrible Execution
Verified purchase
I can't believe how many people gave this movie a 5 star rating? The acting script, & dialog are all horrible along with being extremely hokey. Add to that, Biblically speaking, they got it all wrong in that the one world religion won't be instituted until after the one world government & not when America is still an autonomous.
But even with giving this movie "artistic licence" it still doesn't save it from botching an opportunity to promote The Gospel & JESUS CHRIST as the one true religion while still showing compassion & "tolerance" of others beliefs in a powerful & believable way! With the right script, dialog, & actors this could've been a great movie instead the hackneyed mess that it was.
3 people found this helpful
See all reviews
Back to top
Get to Know Us
Make Money with Us
Amazon Payment Products
Let Us Help You
EnglishChoose a language for shopping. United StatesChoose a country/region for shopping.
© 1996-2022, Amazon.com, Inc. or its affiliates