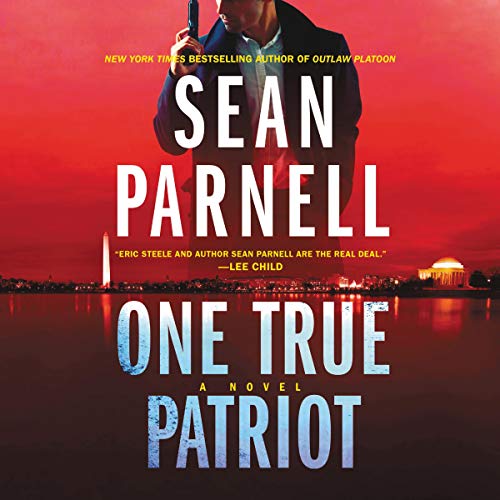 Special operative Eric Steele must stop a foreign assassin targeting top-tier US military personnel and derail a strike aimed at the heart of America in this third electrifying military thriller from theNew York Times best-selling author of All Out War, perfect for fans of Brad Thor, Vince Flynn, and Tom Clancy

Two months after taking down terrorist Aleksandr Zakayev, Eric Steele is back in action. Though he is completing his Alpha assignments with the same deadly efficiency as always, he has lingering questions about his missing father - and his own future in the Program.

When Steele gets the alert that a fellow Alpha is in serious trouble, he rushes to Paris - only to arrive too late. Jonathan Raines, Stalker Six, is dead, the victim of a brutal attack. While on leave in the City of Light, Raines had met an attractive art historian who lured him into a trap. Before she vanished, the mysterious woman left a warning for anyone from the Alpha program who might follow her.

One of the best and most effective warriors in the top-secret Program, Steele has been trained to take on enemies, and no threat will deter him from avenging a fallen brother. But the killer won’t be easy to find. The search takes Steele around the world, from France, to the Adriatic coast of Italy, to the outskirts of Aleppo, Syria, and to a top-secret prison in Russia - where, unexpectedly, he finds more clues about his father - before finally taking him back to the streets of Washington, DC.

No one is safe while the killer is on the loose, and the danger is heightened when Steele discovers intel that killing Alphas is just the beginning of a larger, more nefarious plot. The real target is much, much bigger - and it’s up to Steele to prevent catastrophe before he becomes the next elite warrior to fall.

Special invitation from Audible!
Learn more about Membership
List Price: $30.79
You Save: $3.85 (13%)
By completing your purchase, you agree to Audible’s Conditions Of Use
Sold and delivered by Audible, an Amazon company

Junior Clouseau
5.0 out of 5 stars A True American Hero
Reviewed in the United States on October 1, 2020
Verified Purchase
Several years ago I read "Outlaw Platoon" and loved it so I had to read this book. Although the first book was a true chronicle of his wartime difficulties and this book is a fictional story, I truly loved both books. Now Sean is running for a political office near my home in Western Pennsylvania and I am looking forward to voting for him.
Read more
13 people found this helpful
Helpful
Report abuse

Estelle
5.0 out of 5 stars My First Time Reading Parnell - Won't Be My Last
Reviewed in the United States on December 21, 2020
Verified Purchase
I recommend reading this book before I would recommend reading Daniel Silva.
Parnell develops his characters, so the reader relates to more than the twists and turns of the plot.
Seems to me Parnell's personal combat experience and knowledge of warfare adds enhancing detail to confrontations.
The missions are gripping. The sex is not overdone. The flawed characters keep it real.
Nicely written. Not too many words I needed to look up. I don't like being interrupted by words I don't understand, but I can't pass them by without checking their meaning.
Read more
3 people found this helpful
Helpful
Report abuse

YukonJack
5.0 out of 5 stars ⭐️⭐️ EXCEPTIONAL SERIES ⭐️⭐️
Reviewed in the United States on March 14, 2021
Verified Purchase
I don’t often say this but I have to put Mr Parnell’s books right up there with Flynn, Thor, Greaney, Mills, Taylor, Colby, Patten, Berenson, Coes, Andrews, Broyhill, Brown, McCaleb, Miller, Weber, Manning. These names are all well known in this genre, and some of my favorite authors. BE ADVISED, I HIGHLY RECOMMEND YOU READ THESE IN ORDER. 🇺🇸🇺🇸 From one veteran to another, WELL DONE SEAN 🇺🇸🇺🇸 .
Read more
3 people found this helpful
Helpful
Report abuse

Val
5.0 out of 5 stars Watched him on YouTube’s Tim Pool IRL
Reviewed in the United States on December 30, 2020
Verified Purchase
I watch Sean Parnell come on Tim Pool’s YouTube IRL channel and that’s how I came to find out about his books. I’ve recently been binge watching a lot of those military movies and I wanted to go back to reading books. I strictly only read nonfiction but I made this guy my exception and I will be keeping an eye on him!
Read more
3 people found this helpful
Helpful
Report abuse

Sausules
5.0 out of 5 stars Very good spy stuff
Reviewed in the United States on June 20, 2021
Verified Purchase
The third book in the series and it’s likely I’ll read the fourth. Eric Steele is a typical American action hero, which is exactly what I want to read while sitting around the pool while on vacation.

The characters interact well and the action is interesting enough to keep you reading while you hope the good guys figure it out on time.
Read more
One person found this helpful
Helpful
Report abuse

Amazon Customer
4.0 out of 5 stars Lots of action
Reviewed in the United States on June 23, 2021
Verified Purchase
I live near Washington, DC, and since much of the action takes place in the area, it was fun to read about places I know well. The idea that the President has a special force of secret agents, each with his/her own handler seems a bit farfetched, but no more than the premises of other thrillers. I did think the idea of an American agent helicoptering across Russia without any concern from that country's authorities stretched the reader's imagination too much. The author does seem to confuse Alexandria and Arlington at one point, but that's a minor quibble. It's an entertaining, easy-to-read book.
Read more
Helpful
Report abuse

Bonnie
5.0 out of 5 stars We need more Eric Steels in our world.
Reviewed in the United States on June 13, 2021
Verified Purchase
This was the first Eric Steele book I have read, and I cannot wait to download and read the first 2 books in the series. True Patriot, had me hooked from the first few paragraphs. The excitement and tension runs through until the end. Sean Parnell is a gifted writer, his innuendos are current as his characters easily live in today's world. I thoroughly enjoyed this book and will definitely recommend it to my friends.
Read more
One person found this helpful
Helpful
Report abuse

JLPK
5.0 out of 5 stars One True Great Read
Reviewed in the United States on November 12, 2020
Verified Purchase
I read for enjoyment; characters, plots- story lines , action, and realism from those that have been there and done it.
This series ticks all the boxes and then some.Had to force myself to put it down so I wouldn't read it non stop. Bring on the sequel!
Read more
3 people found this helpful
Helpful
Report abuse
See all reviews

donna lincoln
5.0 out of 5 stars Sean is a patriot and great author to boot
Reviewed in the United Kingdom on December 23, 2020
Verified Purchase
Loved this guy on Timcast irl, cant wait to dive into his stories and look forward to him making tim pool a character in next book x
Read more
2 people found this helpful
Report abuse

RONK
3.0 out of 5 stars Mixed feelings
Reviewed in Canada on August 15, 2021
Verified Purchase
In the end I was glad that it was over. At about 80% through the book I started another book. Kalisi, the assassin got a little too repetitive. So that’s the bad part. The rest was fine and so you can’t give it two different star ratings so I played it down the middle.
Read more
Report abuse

Bruce Ross
5.0 out of 5 stars Great
Reviewed in Canada on September 13, 2021
Verified Purchase
Another great action thriller from this author. I immediately ordered the next book in the series.
Read more
Report abuse
See all reviews