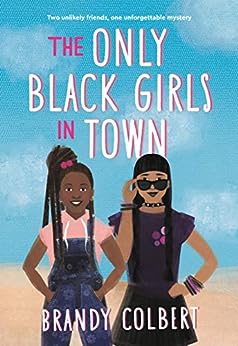 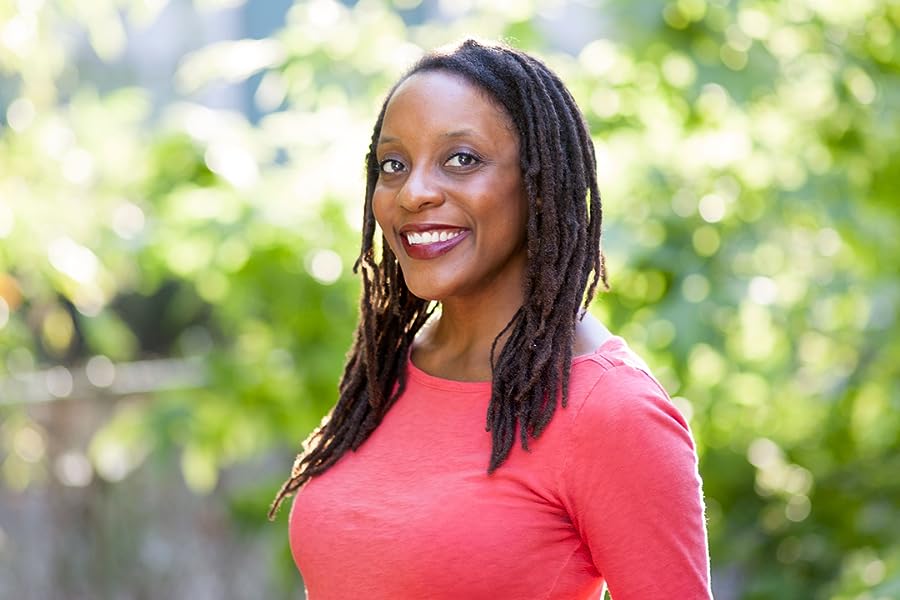 The Only Black Girls in Town Kindle Edition

Brandy Colbert is the critically acclaimed author of the novels The Voting Booth, The Revolution of Birdie Randolph, Pointe, Finding Yvonne, and Stonewall Award winner Little & Lion. Born and raised in Springfield, Missouri, she now lives and writes in Los Angeles. --This text refers to the hardcover edition.

Gr 3–7—Alberta is a 13-year-old African American girl who loves surfing, vegetarian food, and her two dads. She does not love being the only African American girl in town, or the fact that her best friend Laramie is befriending her frenemy, Natalie. Initially, Alberta is thrilled to learn another Black family has moved in across the street—but when she meets new neighbor Edie, they seem to have more differences than commonalities. Brooklyn-born Edie likes coffee, black lipstick, and Edgar Allan Poe, whereas Alberta prefers board shorts and hanging out at the beach. But what starts as a rocky connection solidifies into friendship as the two girls bond over shared identities and solve a mystery that they uncover in the journals in Edie's attic. Alberta's friendship with Laramie seems to falter as she gets closer to Edie, but the girls become more flexible in their evolving friendship and grow. Eventually, Alberta learns how to balance sustaining old relationships with building new ones, and realizes she can stand up for herself. VERDICT A nuanced novel that skillfully depicts the ways friendships can be shaped by common experience and racial proximity. Purchase Colbert's heartfelt middle grade debut for all public and school libraries.—Desiree Thomas, Worthington Library, OH --This text refers to the hardcover edition.

"The Only Black Girls in Town is a tender, humorous, and suspenseful story about navigating the turbulent waters of middle school friendship. Alberta and Edie prove that Blackness is not a monolith and remind us that if you keep looking, there's always more to see and learn about the people and places we love. Colbert's middle grade debut is an unputdownable tale. Readers will want to hang out with Alberta and Edie long after the story ends."―p.p1 {margin: 0.0px 0.0px 0.0px 0.0px; font: 13.0px Georgia}span.s1 {font-kerning: none}span.s2 {font-kerning: none; background-color: #ffee94}Renée Watson, author of Some Places More Than Others

*"Colbert employs a compulsively readable style to convey the sometimes difficult experience of young friendship, and the power and peril of claiming one's identity out loud."―Publishers Weekly, starred review

*"A remarkable middle-grade debut from YA powerhouse Colbert...a sweet story featuring children of color trying to find their place in a society that tells them they do not fit. Strongly recommended."―Booklist, starred review

*"A nuanced novel that skillfully depicts the ways friendships can be shaped by common experience and racial proximity."―School Library Journal, starred review

*Equal parts mystery, coming-of-age narrative and coastal California travelogue, The Only Black Girls in Town is an affectionate tribute to friends, both new and old, and the ways they enrich our lives.―Bookpage, starred review --This text refers to the hardcover edition.
Read more

4.7 out of 5 stars
4.7 out of 5
230 global ratings
How are ratings calculated?
To calculate the overall star rating and percentage breakdown by star, we don’t use a simple average. Instead, our system considers things like how recent a review is and if the reviewer bought the item on Amazon. It also analyzes reviews to verify trustworthiness.
Top reviews

Bridget M Farr
5.0 out of 5 stars Such an easy, relatable read!
Reviewed in the United States on March 16, 2020
Verified Purchase
As a teacher of students reading middle grade and YA, I often don't enjoy reading middle grade fiction at home because I need a break from having their voice and concerns in my head. That being said, I LOVED this book. The voice of the characters was so relatable without having any of the artifice that can come with middle grade characters. Colbert also tackles issues of race with care. She even brought to like some issues (no spoilers) that I've never seen in kidlit: rarely in adult fiction! So many of my students would love this book, and I can't wait to begin handing them copies.
Read more
5 people found this helpful
Helpful
Report abuse

Debb Adams
5.0 out of 5 stars One of my favorite reads of the year so far
Reviewed in the United States on June 5, 2021
Verified Purchase
There are so many layers to the story, I couldn’t stop reading it! Plus I’m a sucker for any book with a beach as the setting! Librarians and teachers, get this into the hands of middle graders!
Read more
One person found this helpful
Helpful
Report abuse

Awhimsical
5.0 out of 5 stars Getting Understanding, Representation and Entertanment!
Reviewed in the United States on August 18, 2021
Verified Purchase
Great book as my neice and Sister and I were
pleasantly entertained, educated and represented. Thanks for a great read. Enjoyable!!!
Read more
One person found this helpful
Helpful
Report abuse

Indian mama
5.0 out of 5 stars Great book for middle schoolers
Reviewed in the United States on August 13, 2021
Verified Purchase
Really good story - love the characters and all the relationships they have with the people around them. Accurate portrayal of middle school troubles
Read more
One person found this helpful
Helpful
Report abuse

Fenway
5.0 out of 5 stars Great read
Reviewed in the United States on July 28, 2020
Verified Purchase
Read it with my 8 and 12 year old granddaughters. Excellent book.
Read more
One person found this helpful
Helpful
Report abuse

elh
5.0 out of 5 stars Amazing book for tween girls
Reviewed in the United States on May 9, 2021
This book is packed with well-executed layers of important content and representation, but first I just want to say that at its core, it brilliantly captures the turbulent years of girl tweenhood probably better than any other contemporary book I have read. This book felt authentic and relatable, and I was invested from start to finish. That said, let's talk about those layers. In addition to really capturing a stage of life, this book take on so many additional themes and manages to handle them with nuance and complexity: race, a girl being raised by two dads, NY meets SoCal culture, friendships, first romantic interests, identity, divorce, periods, developing late/developing early, communication. It's all here.

Age Rec: Booksellers market this for 3rd-7th grade. Personally I think the content may be a bit over the head of a 3rd/4th grader. It's not that it's inappropriate. I just think that many of the issues in the book are probably not that relevant to most girls at those ages, nor should they be. I personally think this is a better choice for the Upper Middle Grade (5th/6th Grade) age range. I also think it is very much on point for 7th graders as well. The MC is 12 and in 7th grade. Basically, I recommend this for girls in 5-7th grades.
Read more
One person found this helpful
Helpful
Report abuse

Red Canoe Reader
4.0 out of 5 stars Two friends who mature differently and begin to follow their own interests offers comfort to MG kids
Reviewed in the United States on January 7, 2021
4.5 stars.

I loved so many things about this tender book.

-The main characters, Alberta and Edie. Two very different girls from very different worlds, but with one important thing in common. They are the only Black girls in seventh grade. Now that Edie has moved in across the street from Alberta, she has someone who can understand how she sometimes felt alone in her class.
-Their families. Edie’s mother, recently divorced, has the courage to move across the country and follow her lifelong dream of opening a B&B. Alberta’s dads and her biological mother couldn’t love her more or be more supportive, as they carefully lead her through life.
-The realistic growing pains Alberta and her best friend suffer through as they mature differently and begin to follow their own interests will offer comfort to MG kids.
-The sadness Edie experiences when her busy dad can’t seem to find the time to call or visit, will help kids of divorce know they are not alone.
-The civil rights secrets Edie and Alberta learn when they discover some mysterious journals will prompt both surprises and perhaps a desire for kids to learn more about civil rights history.
-Edie and Alberta’s determination and resourcefulness in their search to find the owner of the long lost journals

This is a story you won’t want to end!
Read more
2 people found this helpful
Helpful
Report abuse
See all reviews

sandyas
1.0 out of 5 stars Meh
Reviewed in the United Kingdom on November 26, 2020
Verified Purchase
My daughter didn’t like it at all. She can’t even finish it. She said she found it uninteresting. No real adventure, more a diary of things happening
Read more
Report abuse

Tags that will help you discover similar books. 16 tags
middle gradeeditors' pickfriendshipadult fictioncontemporarygrowing up & facts of lifegeography & culturesmystery, thriller & suspensediversityfamilyadoptionparentsdifficult discussionsmiddle schoolfriendship, social skills & school lifeprejudice & racism
Results for:
Page 1 of 1Start overPage 1 of 1
Previous page
Next page
Where do clickable book tags come from?
Book tags are created from a variety of sources, some of which are customer-generated. Amazon is not legally responsible for the accuracy of the tags represented. If you are an author or publisher and would like to remove a tag associated with your title, please contact your vendor manager or publisher support team.