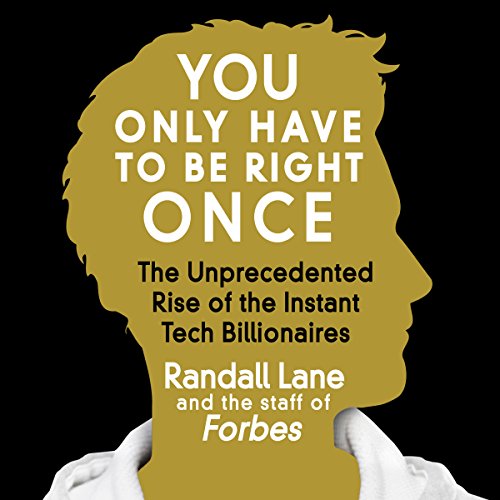 You Only Have to Be Right Once: The Unprecedented Rise of the Instant Tech Billionaires

The ultimate insider's look at the newest titans of tech, from the editorial team at Forbes.

Silicon Valley's new billionaires are an unconventional breed, turning ideas into money at a rate never before seen in human history. Their ascension proves a turning point in how great fortunes are made and how technology disseminates.

Among these golden boys are: Elon Musk, billionaire bachelor and founder of Paypal, electric carmaker Tesla, and private space company Space X; Evan Spiegel, 23-year-old founder of Snapchat, who recently turned down a $3 billion offer from Facebook; and Alex Karp, the eccentric philosopher with almost no tech background who turned Palantir into a data-mining champion. Over the last three years, Forbes has published in depth profiles of this new batch of billionaires, including the founders of Spotify, Dropbox, Tumblr, and Twitter. Now, in a compilation introduced and updated by Forbes editor Randall Lane, fans and critics alike will get a comprehensive look at who these super-entrepreneurs are and what they say about their own success and their plans for the future.

Your audiobook is waiting!
Learn more about membership
List Price: $19.59
You Save: $2.64 (13%)
By completing your purchase, you agree to Audible’s Conditions Of Use
Sold and delivered by Audible, an Amazon company

Eric Mutta
3.0 out of 5 stars Could do a better job of being a summary.
Reviewed in the United States 🇺🇸 on October 24, 2016
Verified Purchase
This book is OK but could be much better. At the moment, it's caught half-way between being a summary and a detailed account of successful tech entrepreneurs...and falls short at both!

Since it aims to be a summary, it should have focused more on key details:

*durations between events (e.g. how many months passed from the founding of Whatsapp to its $19bln acquisition by Facebook?).

*disasters and triumphs (e.g. what caused Whatsapp to suffer an outage shortly after its $19bln acquisition?).

Books like these are read by aspiring tech entrepreneurs and this one could be better structured to answer the questions we all have in our head when seeking inspiration.
Read more
One person found this helpful
Helpful
Report abuse

Nick Patton
4.0 out of 5 stars Four Stars
Reviewed in the United States 🇺🇸 on October 11, 2016
Verified Purchase
Pretty good read overall, very interesting to hear the short story about how the tech billionaires did it
Read more
Helpful
Report abuse

Edward H. Carleton
4.0 out of 5 stars Excellent view of "Innovation" in our modern world.
Reviewed in the United States 🇺🇸 on December 19, 2014
Verified Purchase
Good view of innovation versus improvement. If you are an 'idea" person you need to read this one.
Read more
4 people found this helpful
Helpful
Report abuse

Ninos Youkhana
2.0 out of 5 stars Bio of companies and CEOs
Reviewed in the United States 🇺🇸 on June 25, 2015
Verified Purchase
It is just a BIOs of companies and CEOs nothing special. It is a 1 read book. I believe not worth the money. Www.nninoss.com
Read more
One person found this helpful
Helpful
Report abuse

Marla DeJohn
5.0 out of 5 stars Five Stars
Reviewed in the United States 🇺🇸 on May 10, 2016
Verified Purchase
Will be a good read
Read more
Helpful
Report abuse

Ranga
5.0 out of 5 stars Five Stars
Reviewed in India 🇮🇳 on February 2, 2015
Verified Purchase
Must read once for entrepreneurs!
Read more
Report abuse

The Man Known as "Customer of Amazon"
3.0 out of 5 stars OK read.
Reviewed in Japan 🇯🇵 on November 1, 2014
Verified Purchase
Reprinted articles. Some of them interesting.

Several of the subjects are actually not yet billionaires (unless by extrapolation of what a company might be worth) and did not become theoretically so in an "instant." This and the overall tone made me feel that the author was packaging his own exciting story rather than trying to uncover the mundane details that drive these unique individuals in each circumstance.
Read more
Report abuse
See all reviews