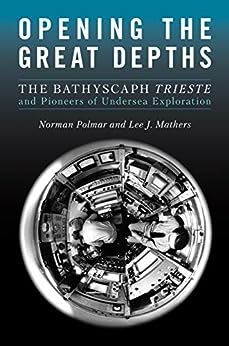 by Norman Polmar (Author), Lee J. Mathers (Author) Format: Kindle Edition
See all formats and editions
Sorry, there was a problem loading this page. Try again.
“We were certainly pioneers as the Trieste was one of only two such vehicles in the world—the French Navy’s bathyscaphe FNRS-3 was the other. It meant that we had to ‘write the book’ about deep submergence operations in terms of technique and technologies. We learned by doing and by failures, although very few of the latter were serious. For example, if we needed a piece of equipment we would have to design it and make it. There were no commercial vendors who catered to deep submergence technology requirements. The market was far too small.”​—From the foreword by Capt. Don Walsh, USN (Ret.), PhD, U.S. Navy Submersible Pilot No. 1​

Developed by French physicist Auguste Piccard and his son Jacques, the bathyscaph Trieste was a scientific marvel that allowed unprecedented scientific, technical, and military feats in the ocean depths. France and the United States both acquired and subsequently developed variants of the original bathyscaph. While both France and the United States employed​​the bathyscaph as a tool for scientific investigation of the deepest ocean depths, the U.S. Navy developed and employed the Trieste for military missions as well.​From its earliest years, participants in the Trieste program realized that they were making history, blazing a trail into previously unexplored and unexploited depths, developing new capabilities and opening a new frontier. Comparisons with developments in space and the space-race between the United States and the Soviet Union often were​made​ concerning the Trieste program and contemporary developments in undersea technologies and capabilities.​

The Trieste opened the entire oceans to exploration, exploitation, and operations. The bathyscaph was a first-generation system, a “Model-T” that spawned an entirely new industry and encouraged new concepts for deep-ocean naval operations. Advances in deep-sea technologies lacked the “gee-whiz” factor of the concurrent space​race, but were highly significant in the development of new technology, new knowledge, and new military capabilities.​

Opening the Great Depths is the story of the three Trieste​ deep-ocean vehicles, their​ officers and enlisted men, and the civilians, often told in their own words, documenting for the first time the earliest years of humanity's probing into Earth's final frontier.​
Read more
Previous page
Next page

"This book, at last, tells the story of the Trieste craft and the people who built and operated them." --Seapower

"Opening the Great Ocean Depths is an engaging tale with a colorful cast of characters that shows that those who dare, can achieve great things. Readers with an interest in the history of oceanographic exploration will find this an information work as will those interested in the evolution of U.S. Navy's research into deep water operations. The book provides illuminating details of Trieste's involvement in the search for both the USS Thresher and the USS Scorpion. An excellent addition to your maritime history library!" --Armchair General

"Polmar and Mathers present an informative, entertaining, and fascinating story in Opening the Great Depths. This book will captivate readers." --Ricochet

"Thirty years after the Cold War, much of the Navy's submarine service's huge contribution to victory is still quite secret. Even less known are the contributions of the scientists and explorers whose daring expeditions in the deepest seas made those Navy successes possible. Now the ideal co-authors are able tell those amazing true tales. Combining science and adventure, Polmar and Mathers have produced a real page-turner." --John Lehman, former Secretary of the Navy, author of Oceans Ventured and Winning the Cold War at Sea

"This is an exceptional and essential book, offering an authoritative assessment of the craft and the people who pioneered exploration of and working in the last great frontier on this planet, the deep ocean. I highly recommend it." --James P. Delgado, aquanaut, archaeologist and author of War at Sea: A Shipwrecked History

"Opening the Great Depths is a fascinating account of the Trieste program, which enabled deep sea exploration for the first time, achieving unprecedented scientific and military feats. Polmar and Mathers do an amazing job weaving the technical details into a gripping account of the failures and successes achieved. Explorers and scientists, plus ocean and military enthusiasts will thoroughly enjoy the journey as those aboard the Trieste descended into one of Earth's most inhospitable environments--the ocean depths." --Rick Campbell, #1 Bestselling author of​ The Trident Deception series

"The authors tell a good story about these remarkable vehicles, the adventures experienced and the many personal risks taken by the people involved. They also discuss the technology and construction in laymen's terms. A great read for those interested in deep ocean and submarine technology." --Capt. Charles M. Staehle, USNR (Ret.), first pilot of DSV's-1 and TRIESTE Pilot No. 12 --This text refers to the hardcover edition.

Norman Polmar is an analyst, consultant, and author, specializing in naval, aviation, and technology subjects. He has been a consultant or advisor on naval issues to three Senators, the Speaker of the House of Representatives, and three Secretaries of the Navy as well as to the director of the Los Alamos national laboratory, and to the leadership of the U.S., Australian, Chinese, and Israeli Navies. He has written or coauthored more than 50 published books.

Lee J. Mathers is a former Surface Warfare Officer with an intelligence subspecialty. He attended the University of Utah, Central Michigan University, and the Defense Intelligence School, the last followed by intelligence duty in the Office of the Chief of Naval Operations. He has written for the magazines Proceedings and Naval History, and was a key researcher for the Naval Institute book Project Azorian by Mr. Polmar and Michael White. He now resides in Canada--working with Mr. Polmar on another book. --This text refers to the hardcover edition.

Amazon Customer
5.0 out of 5 stars Well written and complete
Reviewed in the United States on July 7, 2021
Verified Purchase
Extremely well written and researched, the authors explain the different situations encountered by the Trieste and its pilots.

Thomas J. Dougherty
5.0 out of 5 stars Pioneering deep ocean operations
Reviewed in the United States on November 29, 2021
This book focuses on the building and operation of the Trieste bathyscaphs. Early history of the original Trieste and its historic dive to 35,797 feet in 1960. The many technical challenges of operating a deep diving bathyscaph at the edge of technology are described as well. Continual problems with the electrical system and batteries plagued operation for years. Improvements to equipment as a redesign of the gasoline filled floatation system generated a follow-on design modification on the original Triest I, and was redesignated as Trieste II. To their credit, the authors clear up previous confusion around how many Triestes were developed (three) and the confusion around the naming of the second modified Trieste and third, totally new iteration. The confusion arose from construction of a totally new, covert Trieste III (aka DSV-1) that was completed in the latter 1960’s. This was originally intended not primarily for deep ocean exploration, but for the Winterwind program; the covert recovery of Soviet missile components and other items in the deep ocean. Several world events, described in the book, occurred in 1968 that conspired against this operation and the new Trieste III was publicly revealed during the dives investigating the loss of the US submarine, Scorpion. But, it was confusingly labelled as Trieste II.

There are detailed descriptions of the publicly known (‘white”) missions that these remarkable craft carried out, as well as some revealed “black” covert operations. The many trials and tribulations of operating the bathyscaph during these missions are covered. Also described are the backgrounds and skills of the men piloting these craft and the need to qualify new operators on a regular basis as assignments changed in the Navy. Key missions include descriptions of the examination of the sites of the lost nuclear submarines Thresher and Scorpion as well as the recovery of a lost film capsule from the Hexagon series of spy satellites. Later public missions described were devoted to oceanology missions at depths of 20,000 feet. After many years of service, Trieste III (DSV-1) is retired in the 1980’s when Sea Cliff receives a titanium sphere capable of operations down to 20,000 feet.

The roles of the Trieste bathyscaphs in the larger scheme of ocean operations in the 1960-70’s time period are also covered in depth. This is one of the best descriptions of how it fit into the larger frame of US deep-sea operations which included the similar designed Alvin, Sea Cliff, and Turtle submersibles, as well as the Special Projects submarines Halibut and Seawolf. The first three were capable of dives to 6000 feet, while Halibut and Seawolf could operate deep diving, unmanned remote towed vehicles. Be sure not to miss the notes in the back. In addition to refences to the research, there are some very informative details in that section as well. Overall, this book is a welcome and valuable addition to the library of anyone interested in naval or submarine history.
Read more
Helpful
Report abuse
See all reviews