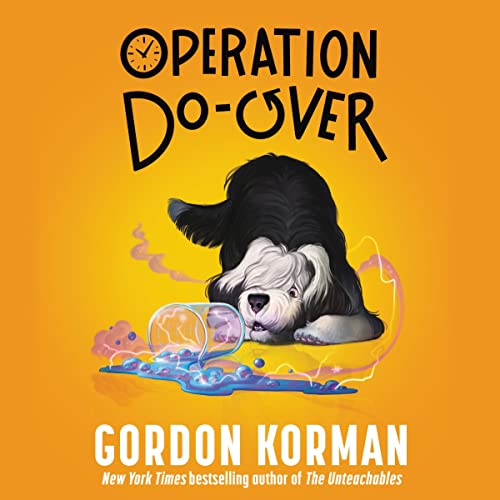 From the New York Times best-selling author of The Unteachables, Gordon Korman, comes a hilarious new high-concept friendship story in the vein of Back to the Future. Perfect for fans of Korman’s Restart.

Mason and Ty were once the very best of friends, like two nerdy sides of the same coin...until seventh grade, when Ava Petrakis came along. Now Mason can trace everything bad in his life to that terrible fight they had over the new girl. The one thing he’d give anything for is a do-over. But that can’t happen in real life—can it?

As a science kid, Mason knows do-overs are impossible, so he can’t believe it when he wakes up from a freak accident and finds himself magically transported back to seventh grade. His parents aren’t yet divorced, and his beloved sheepdog is still alive. Best of all, he and Ty haven’t had their falling out yet.

It makes no logical sense, but Mason is determined to use this second chance to not only save his friendship (and his dog!) but do other things differently—like trying out for the football team and giving new friends a chance. There’s just one person he’ll be avoiding at all costs: Ava. But despite his best efforts, will he be able to stop the chain of events that made his previous life implode?

Your audiobook is waiting!
Learn more about membership
List Price: $19.18
You Save: $2.40 (13%)
By completing your purchase, you agree to Audible’s Conditions Of Use
Sold and delivered by Audible, an Amazon company

Jothebookgirl
5.0 out of 5 stars A novel about time travel that examines the long-term impact of one’s actions.
Reviewed in the United States 🇺🇸 on February 13, 2022
I’m a huge fan of Gordon Korman and Operation Do Over did not disappoint. Many equate this title to previous novel Restart but I didn't read that so this subject was brand new for me.

The thoughtful premise of this novel is the time travel narrative that examines the long-term impact of one’s actions.

Mason Rolle has shared a “two-brain hive mind” with Tyrus Ehrlich since elementary school. They share the same sports phobia and a deep love of science and time travel.
Big changes occur when new girl Ava Petrakis arrives from New York City and both boys develop crushes. The guys make a pact to a “non-Ava treaty” to maintain their friendship. But a terrible falling-out happens between them when Mason and Ava are caught in a photograph that ends up on the 7th grade chat.
Narration alternates between Mason at ages 12 and 17, until an incident sends 17-year-old Mason back to his 12-year-old body and life. Given this opportunity for a do-over, he seeks to right wrongs as well as try new things that maybe could alter the bad things that happened during his middle school years.

I found the story engaging from start to finish. It is filled with warmth and middle grade humor. All my questions didn’t get answered but hey that’s ok since the book was so good. I kind of feel that Korman left it open for a part two book in the lives of these friends. Ages 8–12
Read more
Helpful
Report abuse

Melinda
4.0 out of 5 stars Great premise and writing--not sure the message is completely healthy
Reviewed in the United States 🇺🇸 on August 18, 2022
I quite enjoyed this book. Like Restart, it dealt with a character getting a chance to fix past mistakes. It's a premise I like a lot.

The writing was good, as always. I liked the characters. The pacing was good. The ending was generally satisfying.

There did seem to be a bit of a "nerds need to get into team sports in order to be popular and happy" message. With our main character, it seemed an interesting and organic twist. [SPOILER! SPOILER!! BEWARE!] But then when the second character turned from unpopular and unlikeable to cool, happy, and attractive, just because of sports, and the main character said something along the lines of how nerds just need to "put themselves out there," it felt quite preachy, with a message of "being sciencey and academic isn't enough." I really don't think that's what the author meant, and I don't think everyone will take it that way, but some kids definitely will. I wish the author had just kept the sports transformation to the one character. [END SPOILERS. SAFE TO KEEP READING].

More accurate personal rating because of my issue with the message: 3.5 stars.

Signed,
A nerd who never did team sports in school but who was quite happy.
Read more
4 people found this helpful
Helpful
Report abuse

X
5.0 out of 5 stars Another Korman classic!
Reviewed in the United States 🇺🇸 on January 18, 2022
Mason and Ty have had a special connection since their Gymboree days--the lasting, loyal, deeply connected kind of friendship most of us dream of having. Everything changes in the 7th grade when a new girl, the most awesome girl ever, moves to town and both boys are enamored. Five years later, their friendship in tatters, the consequences of that long-ago falling out spiral to destroy Mason's life. When he suffers an accident and finds himself back in the 7th grade, can he avoid making the same mistakes?

As with every Gordon Korman book, this is funny, brisk, and compellingly readable. I've never read anything of his that wasn't absolutely absorbing and this is no exception. This is such an interesting meditation on friendship, fate, confidence, and how much control we really do (and should) have over our worlds. While the basic premise is familiar, the execution is unique--there were several beats and turns I had not anticipated. In the end, the reader is left with much to ponder, which is the mark of a great book!

Many thanks to the publisher and NetGalley for the opportunity to read and review!
Read more
4 people found this helpful
Helpful
Report abuse

Lee
5.0 out of 5 stars Going back in time
Reviewed in the United States 🇺🇸 on January 23, 2022
Mason and Ty have been best friends forever, that is until seventh grade brings new student Ava. When something happens between Mason and Ty because of Ava, the two stop talking. When Mason is in an accident, Mason is back in 7th grade. Is it possible he went back in time? He sees his dog is still around, and his parents aren’t divorced. He realizes he has a chance at a do-over and can make things right between he and Ty. Is that possible? Can he get back to his regular life, if it even existed. He realizes given a second chance he might get it right this time. Being a science nerd, he’s always believed if you can go back in time and do things differently, you can change the future.
Read more
Helpful
Report abuse

J. Margeson
4.0 out of 5 stars What do I know now that I wish I knew then?
Reviewed in the United States 🇺🇸 on February 21, 2022
I love Gordon Korman books and my students do too so I was eager to read his newest release, Operation Do-Over. This book seemed to target an older audience than his last couple which I appreciate. The story is half set in middle school and half set in high school and in typical Korman form, the story is revealed a piece at a time with different perspectives (and this is an interesting talking point because high school Mason knows different things than current middle school Mason - what do we wish we knew then that we know now?). The ending was perfect - Operation Do-Over will be a fantastic addition to my class library. Thanks to #NetGalley for the opportunity to preview #OperationDoOver - I really enjoyed it and am looking forward to his next release!
Read more
One person found this helpful
Helpful
Report abuse

Dawn B
5.0 out of 5 stars Great Time Travel Book
Reviewed in the United States 🇺🇸 on January 19, 2022
Mason and Ty are best friends until a girl comes along. They end their friendship over a disagreement over her. Five years later, they have a run in and Mason ends up in trouble. When he has a car accident later that day, he is transported back in time to right before the girl shows up. Mason tries to change things so that he and Ty remain friends.
Opinion
This book was super fun to read. Time travel is such a cool concept and using it to fix a broken relationship lets students focus on what they would like to do over. I can see this having a lot of reach with students.
Many thanks to Net Galley and Harper Collins for providing me with an ARC of this book.
Read more
One person found this helpful
Helpful
Report abuse
See all reviews