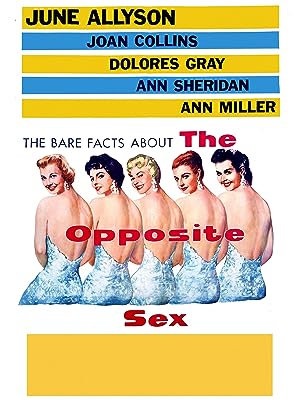 Heldenbaer1Reviewed in the United States on May 4, 2020
4.0 out of 5 stars
Great piece of vintage cinema- definitely not either "The Women" or Ephron's 2000's remake
Verified purchase
Fascinating to see these actresses do the same roles that the earlier B/W film essayed, with musical interludes- spoiler- this is NOT a 'musical' per se - merely the script, with only a few numbers interspersed. As it was less than most releases, I'm not upset at what it cost. But I doubt I'll watch it again, more than twice b/c June Allyson- what did ANYONE ever see in her, as either an actress or a singer? For who can compare to Norma Shearer- or even dare to try?
6 people found this helpful

FeliciReviewed in the United States on December 21, 2019
5.0 out of 5 stars
One of my favorite movies
Verified purchase
Amazing movie. If you like “The Women” with Meg Ryan and Eva Mendes, trying watching one of the originals!

•if you found this review helpful, please let Amazon know by clicking the helpful button down below! Thank you !

Byron KollnReviewed in the United States on June 14, 2011
4.0 out of 5 stars
June Allyson daubs her claws Jungle Red in musical spin on "The Women"
Verified purchase
1956's THE OPPOSITE SEX reworks Clare Boothe Luce's "The Women" into a musical vehicle for June Allyson, in what turned out to be one of her final roles at MGM. The main novelty in "The Women" was it's all-female cast (men were discussed but never shown). In THE OPPOSITE SEX, the guys finally get to play a part.

The latest gossip swirling around Sidney's Salon in New York concerns Kay Hilliard (June Allyson), a former radio and musical theatre star. It seems that her husband Steve (Leslie Nielsen), the successful Broadway producer, has been mixing business with pleasure by stepping out with opportunistic chorus girl Crystal Allen (Joan Collins). Kay's best pal Amanda (Ann Sheridan) tries to shield her from the truth, but when Sylvia Fowler (Dolores Gray) and some of her cattier comrades zero-in on Crystal and uncork the bottle, Kay finally decides that the only solution is a month-long trip to Reno...

Whilst this lacks the overall tartness and zing of the earlier "Women" (which still holds up remarkably well for a film from 1939), THE OPPOSITE SEX has a lot going for it. By opening up the film as a musical, we can savour June Allyson in one of her final all-singing, all-dancing MGM assignments; traipsing around with her middle-aged male chorus dancers draped over a jungle-gym in "Now Baby Now", and dueting with Harry James on "Young Man with a Horn" (Jo Ann Greer dubbed Allyson's vocals for one song, "A Perfect Love", which must have been *slightly* out of Allyson's range). Serial Broadway belter Dolores Gray sings the Theme Song over the main credits but keeps silent for the remainder of the film. And Ann Miller appears in a fun supporting role when the action reaches Reno, but never once exposes those gorgeous gams for a tap routine. Very curious. Especially when one realises that this MUSICAL remake of "The Women" could have greatly benefitted from several of it's stars having musical backgrounds!

The casting of Joan Blondell in a supporting role as one of Allyson's Park Avenue girlfriends (the ever-pregnant one) must have raised a few eyebrows on the set, given that Blondell had actually been the first wife of Allyson's husband Dick Powell!

Swapping "The Women"'s predominantly Park Avenue setting for the exciting world of backstage Broadway gives THE OPPOSITE SEX much more scope to fill up it's widescreen ratio (pardon the pun). Gone from the original film is it's trademark fashion show sequence, but that was only ever used as a test to show how much progress Technicolor photography had made.

This DVD-R release from the Warner Archive program offers a very sharp print, with beautiful saturated colour. There are a few speckles every now and then, plus the usual compression issues but nothing terribly serious. No extras.

HoundGalReviewed in the United States on May 11, 2021
3.0 out of 5 stars
Worth The Time for Allyson, Shawn
Verified purchase
This is a remake of "The Women," which is a much better film, but it has its moments (The Women wasn't a musical, for one). June Allyson in a more mature role than many she got to play, and a novely song from comedian Dick Shawn (The Producers).
One person found this helpful

It is full of funny hats, (it is the 50's), mediocre songs, ('Banana-millionare'), and woman on woman cat fights.

Campy though it might be, it is a blast to watch. The cast is top notch with June Allyson singing the best of the songs and Agnes Moorehead playing a multi divorced countess.

Almost all of the cast meets on a train to Reno to get divorced, (this is before today's easy divorce laws). There they become friends, argue and become friends again while mean, nasty Joan Collins is in NY steeling June's husband.

Spoilers! Don't worry Joan gets thrown away and all live happily ever after. It is a MGM musical after all.
2 people found this helpful

Sandra LeeReviewed in the United States on July 27, 2011
5.0 out of 5 stars
Love this movie!!
Verified purchase
I love this movie. I begin by watching the 1937 version with Norma Shearer, Rosalind Russell, Joan Crawford. It is a gem. Of course, everything and everyone in it is female. This one stars June Allyson in the Norma Shearer role of Mary, a gorgeous Joan Collins as Joan Crawford's Crystal, includes Joan Blondell as the woman who is always pregnant and also Ann Miller, and Ann Sheridan. and who doesn't love Charlotte Greenstreet (?) with her unforgetable no-nonsense attitude and those long long legs. Great character! Sort of the Marjorie Main from the original - also a wonderful character. Great casts in both but in this version, there are males. Leslie Nielsen is Steven who was always referred to but never seen in the original. I think the remake is very well done and adapts itself very well without the lingering "wish they hadn't ruined the original" thought. I think you'll love this.
3 people found this helpful

depReviewed in the United States on January 18, 2020
2.0 out of 5 stars
Not a good remake
Verified purchase
I bought this to compare it to the Norma Shearer and Meg Ryan versions of The Women. There were many changes, especially with the casting of the male characters. I'm not a fan of June Allyson, and I didn't see any chemistry between her and Leslie Nielsen who played her husband. Of the three I liked the Meg Ryan version best.
One person found this helpful

David AllenReviewed in the United States on October 10, 2019
5.0 out of 5 stars
Very entertaining re-make of “The Women”.
Verified purchase
Critics and audiences alike seem to dismiss this version in favour of the original but I disagree and have always loved
this fun re-make.Being a devoted June Allyson fan I admit to being biased but I think she does a brilliant job in the
original Norma Shearer role.Joan Collins is perfectly cast and Ann Sheridan looks very glamorous and delivers her
priceless lines with her usual panache.A pristine wide-screen print gives us all we could ask for.Thanks so much.
One person found this helpful
See all reviews
Back to top
Get to Know Us
Make Money with Us
Amazon Payment Products
Let Us Help You
EnglishChoose a language for shopping. United StatesChoose a country/region for shopping.
© 1996-2022, Amazon.com, Inc. or its affiliates