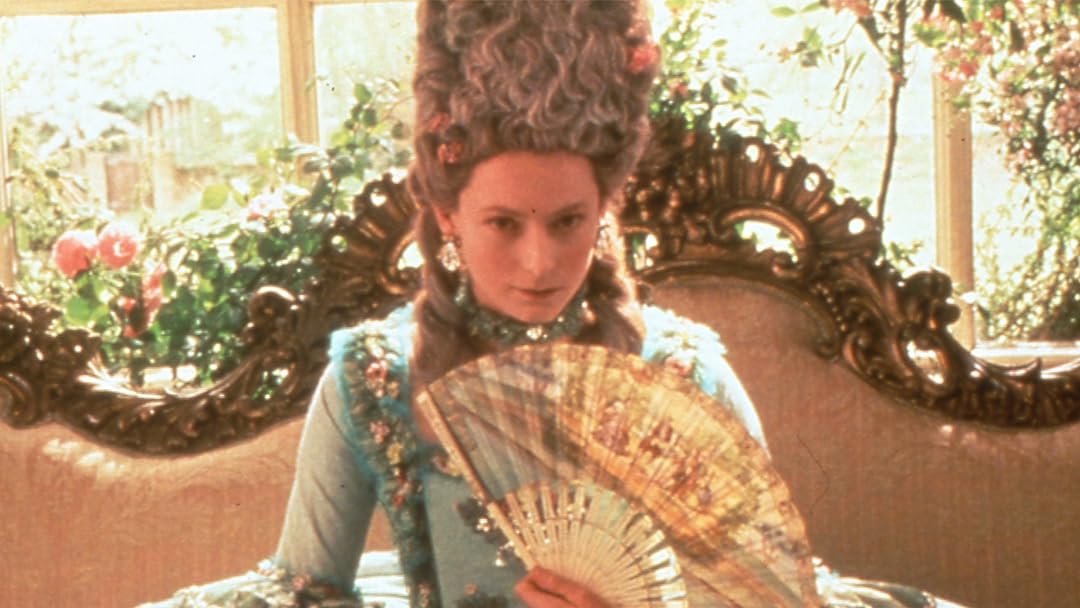 (607)
1 h 33 min1993X-RayPG-13
Young nobleman Orlando is commanded by Queen Elizabeth I to stay forever young. Miraculously, he does just that. The film follows him as he moves through several centuries of British history, experiencing a variety of lives and relationships along the way, and even changing sex. Based on Virginia Woolf's highly acclaimed novel.

Cat TrinaReviewed in the United States on February 11, 2016
5.0 out of 5 stars
"Same person. No difference at all. Just a different sex."
Verified purchase
I am shocked to realize that this film is nearly 25 years old. I saw this in the movies on the big screen in New York City when it came out in the early 1990s. I can't remember now if it was a limited engagement at a theatre like the Angelica back then, but I certainly don't think it was in a lot of theatres since it is a rather "off the beaten path" type of film.

Nonetheless, I don't know why I had never purchased this until now. It's such a creative, eccentric, artfully filmed work and makes me laugh every time I see it, despite some of the darker messages about the nature of war and gender equality (or lack thereof).

I'm not a big Virginia Woolf fan but, as the exception, I loved the book and this film, though some creative license needed to be taken to cover the 400 years of Orlando's story in a limited timeframe.

It opens with Orlando, played androgynously by Tilda Swinton, as a young man and in the throes of a young man's flights of fancy. Then, we meet Queen Elizabeth, played amazingly by Quentin Crisp (the writer). You see where this is going? The lines of gender demarcation have been blurred already.

As a man, Orlando is the heir to wealth, property, opportunity and reign over the opposite sex. When Orlando claims Princess Sasha as his, she asks, "But why?" To which Orlando replies, "Because I adore you." Male entitlement as seen from a male perspective.

Later, when Orlando is a woman and the Archduke Harry has his sights on her, he proclaims, "I am England. And you are mine." To which Orlando asks, "On what grounds?"

"That I adore you," he replies, to Orlando's offense. Male entitlement as seen from a female perspective.

Orlando's abrupt gender switching renders her "legally dead" and therefore, unable to hold any property, whatsoever. "Ah. Fine," she responds, as if it is nothing at all. To which the officials continue, "You are now a female. Which amounts to much the same thing."

Yes, the story is weird but it works. Why did Orlando change? We don't know. But that's not the point of this. This is a serious subject that is transformed by humor, the most beautiful, if at times, outlandish, costumes, and magnificent scenery. Tilda Swinton is particularly funny with delivering Orlando's reactions to various circumstances, even providing some little asides to give us a chuckle or some food for thought. And to throw in a redeeming, though flawed, male character, Billy Zane rides in on his high horse as Shelmerdine, the American freedom fighter who is always chasing the future.

This is an art film with lots of brilliant dialogue and lots of hidden gems you might get on the second or third viewings. Every time I watch this, I pick up more and more of the treasure chest of fine details and each viewing becomes richer and richer.

This film is not for everyone – I will concede that, but for those people who can appreciate all the beauty in the strange history of Orlando, this will keep delivering with each viewing.

Auntie'sBoyReviewed in the United States on October 4, 2020
5.0 out of 5 stars
Beautiful, Brilliant and Mysterious
Verified purchase
Not to be a snob, but this is not exactly one for the masses. But if you are a Masterpiece Theatre junkie and have a good feel for the last four hundred years of British culture and history you should have no problem following Orlando's adventures. However, one really must "read between the lines" in this gender-bending tale, as Sally Potter's mesmerizing storytelling and Tilda Swinton's epic performance in the title role will give one a clear map, but the viewer will be required to connect some of the signposts on their own. Not to say that it is purposefully opaque or "weird for the sake of being weird." But this film truly requires the viewer to be an active participant, but shares enough wit and opulence along the way to more than justify the extra effort.
18 people found this helpful

K. A. LewinskiReviewed in the United States on November 16, 2020
1.0 out of 5 stars
Even the pretty costumes aren't worth this snooze-fest (and I'm a historical reenactor).
Verified purchase
I haven't read the book, but this looked like it had an interesting premise. Sadly, there was no character depth or growth in the film, and Ms. Swinton just transports from time period to time period without much explanation as to how or why, other than Queen Elizabeth deemed her some sort of immortal. No actual discernable plot or memorable characters after an hour and 10 minutes (or maybe I nodded off?), so I decided to skip the last few minutes and use that time to go to bed early.
8 people found this helpful

Robert HayesReviewed in the United States on March 13, 2016
4.0 out of 5 stars
Androgyny and immortality
Verified purchase
Movies about transgender people don't number that many (at least in mainstream cinema), and even less so the further back you go, so ORLANDO is somewhat unique by virtue of its very existence. Based on a Virginia Woolf novel (which I haven't yet read, but definitely want to), it tells the story of Orlando, an English nobleman blessed/cursed with immortality and who changes sex from male to female. Without going into spoiler territory (e.g., when and why Orlando changes), the film is largely concerned with social roles and expectations of men and women, unfairness in how women have been treated, etc. I thought it was rather interesting to for Orlando to be possessive of a woman he fancies early in the film, only to be on the receiving end of a similar proposal later on as a woman. And then there was my favorite scene where Orlando sits in on a discussion between several famous writers/poets (including Alexander Pope). All of the feminist discussion and thematic content alone makes this worth a watch, but there are a few minor quibbles to be had. The chief one is due to the main character's immortality. You get several sections in different time periods that show Orlando's progress, but it gives the film an episodic feel at times. I also wasn't terribly satisfied with the way it ended, although I'd be at a loss to posit an alternate ending without extending the running time further (and I thought it was a good length already). Suffice it to say, this is one of the best performances I've ever seen out of Tilda Swinton, although she was less convincing as a man than a woman (for obvious reasons). Still, her character isn't the only fun the film has with gender fluidity, as Queen Elizabeth is played by Quentin Crisp and there are a couple castrati who provide some diegetic music. Aside from the performances, the production design, sets, costumes, and score were all equally good. For more open-minded viewers, I can wholeheartedly recommend this. It will definitely affect the way you think about gender/gender roles.
27 people found this helpful

RhayzzaReviewed in the United States on October 28, 2020
5.0 out of 5 stars
This Was EPIC...!
Verified purchase
A LOT of heart went into this production, I absolutely loved it from beginning to end...which took me a while to finish. I got angry a few times (I'm very anti-rabid-social justice nonsense; there's being cool and there's ridiculous overkill, often peppered with lack of context nowadays)...but I found myself coming back to it. So I guess I could also say that it evoked a lot of different emotions in me, from start to finish. I felt a slight Monty Python (Gilliam) vibe thru the movie as well.

Also: I went in not knowing the character was either gender at first. That was a lot of fun, to watch Tilda as a dude.

I'm LOVING the music, as well. The score, that is.
6 people found this helpful

Meghan Kaur LouveReviewed in the United States on October 22, 2020
5.0 out of 5 stars
Virginia Woolf has done so much and is so famous in feminism and transgender studies
Verified purchase
Back in 1980, before this movie was ever made, I read Woolf's novel ("Orlando: A Biography") and loved it. It was at a feminist bookstore in Madison, Wisconsin ("A Room of One's Own", named after one of Woolf's longer feminist essays) that I found it. I couldn't help but buy it and instantly fell in love with it. The inspiration for the character of Orlando was Virginia's ten year lesbian partnership (1925 to 1935) with Vita Sackville-West). Interestingly, both women were considered to have been at the peak of their writing careers while together (Orlando was published in 1928). Woolf unfortunately had a history as a victim of sexual abuse, and of special note was the suicide letter she left where she explained that she drowned herself by filling her pockets with rocks and walking into a river. So sad.
3 people found this helpful

Swirly GirlReviewed in the United States on March 25, 2017
5.0 out of 5 stars
all the actors do an excellent job, well directed and produced
Verified purchase
A young noble during the reign of Elizabeth I is favored by the queen who decrees his family estate should be his for himself and his heirs in perpetuity . She verbally adds the stipulation that he never get old, to which he agrees. Small problem: the estate is granted to Orlando the young man; but, along the line Orlando wakes up a woman and unless he/she has a child the estate is forfeit unless s/he has a male heir. The story follows Orlando's extended life from the time of Elizabeth I through WWII and marks the changes in society and in Orlando herself as she and society learn to cope with each other. This story has a perhaps unexpected (yet beautiful) ending since it does not end in the same way the book (by Virginia Woolf) does. Tilda Swinton and, indeed, all the actors do an excellent job, well directed and produced.
19 people found this helpful

janiajaniaReviewed in the United States on October 28, 2020
5.0 out of 5 stars
Ahead of its time and just right
Verified purchase
I saw this film when it first came out. Read the book before that. Had no idea how ahead of its time it was until a recent rewatch. A primary course in gender studies. Funny and beautiful to watch. War, childbirth, transforming bodies, the full spectrum of what gender means is what Virginia Woolf tackled with this story. A great fit for those of us who, perhaps, never had to question our own genders, those of us who didn't land in skin that didn't fit. This film showed what it means to land in skin that doesn't fit, and what it doesn't mean. A fabulous rewatch, again and again.
3 people found this helpful
See all reviews
Back to top
Get to Know Us
Make Money with Us
Amazon Payment Products
Let Us Help You
EnglishChoose a language for shopping. United StatesChoose a country/region for shopping.
© 1996-2022, Amazon.com, Inc. or its affiliates