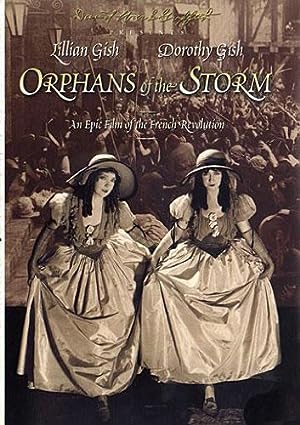 Orphans Of The Storm

(7)7.32 h 30 min192113+
D.W. Griffith's last great success, "Orphans of the Storm" is a handsome, whirlwind of a film starring Lillian and Dorothy Gish as sisters during the French Revolution. "Orphans" is a wonderful showcase for all the techniques that Griffith had developed, mastered and patented since the beginning of his career.

SharpReviewed in the United States on June 28, 2017
5.0 out of 5 stars
Silent Film-Enjoy
Verified purchase
Magnificently done! This movie, not only, tells/shows how movies began from another era, it teaches us historical France. (I did notice the politics of that era resembled turmoils of present day.) I had never sat through and read caption of a silent film and found it entertaining, more so than some films of modern day. i shall never forget such a masterpiece. The length of it was irrelevant. Thank you Amazon!
One person found this helpful

Amazon CustomerReviewed in the United States on April 15, 2016
5.0 out of 5 stars
Amazing. Its a long film
Verified purchase
Amazing. Its a long film, but the pacing is genius so it didn't seem long. Characters are swept up in the French Revolution, danger from all sides in the streets of Paris. Grand sets and costumes as you might expect. If you like silent era films even just a bit, watch this film. Schildkraut's performance is perfect in a strangely counterpoised role, and helps make the film more accessable to modern audiences. Loved the term "pussyfooting" applied to Robespierre
One person found this helpful

E.IVReviewed in the United States on November 6, 2016
4.0 out of 5 stars
Four Stars
Verified purchase
Good story!

L. GreenReviewed in the United States on April 25, 2016
1.0 out of 5 stars
Not a movie i prefeer
Verified purchase
Was not a fan of silent pictures

GilbertReviewed in the United States on April 30, 2015
5.0 out of 5 stars
Five Stars
Verified purchase
Great suspenseful show.
One person found this helpful

Linda P-CReviewed in the United States on June 25, 2013
5.0 out of 5 stars
Incredible 2-1/2 hours
I had a rainy afternoon to kill and while meandering through Wikipedia I found the D.W. Griffith page - which led me to the Amazon Prime free movies - which led me to Orphans of the Storm. This is an absolutely delightful movie. I watched it 92 years after its release and I'll bet I enjoyed it just as much as those who attended the premier! The politics discussed, some of which are still raging today, are - of course - those of D.W. Griffith, but all-in-all will most likely NOT be the focus of the current-day audience. When you think about the technology of the 1920s, this movie is amazing! It's a traditional love story and a more accurate look at the conditions of the 1790s than you are likely to get in a movie created today. I also found myself thinking that an audience today would have to really concentrate on this movie to follow it, as so many folks in the theaters these days just don't pay a whole lot of attention to what is going on on the screen. This could be an excellent exercise!

I'm sure there are lots of blow-by-blow descriptions of the plot, so I won't include one in my review - just that I really enjoyed this film and highly recommend it as a way to spend a pleasant afternoon.

Annie Van AukenReviewed in the United States on January 12, 2012
5.0 out of 5 stars
Griffith's best!
Modern opinion ranks D. W. Griffith's ORPHANS OF THE STORM well below his INTOLERANCE and THE BIRTH OF A NATION, even though this film was widely considered Griffith's --best-- work at the time of its release. That initial assessment is quite justified: Griffith's multi-layered melodrama of two sisters that plays out against the chaos of the French Revolution is masterfully realized.

"Orphans" had effects that reached far beyond the emotions of moviegoers in 1921. This film was one that inspired Serge Eisenstein's experiments in rapid editing. By comparison though, Serge's eventual style seems mechanical and a weak imitation of Griffith's brilliantly instinctive use of the fast cut. Also, the later sound-era version of [[ASIN:B000GRUQL0 A TALE OF TWO CITIES]] (with Ronald Colman) practically steals entire sequences from this older work.

ORPHANS OF THE STORM is clearly the culmination of over two decades of focused directing experience, and it's equal to or better than any single David Wark Griffith movie. Highest recommendation!
.

This was Lillian Gish's last appearance in a Griffith film.

The Gish sisters were directly related to Pres. Zachary Taylor.

Joseph Schildkraut (the Chevalier) was the first non-American to win an Oscar: Best Supporting Actor - [[ASIN:B0006HBV3W THE LIFE OF EMILE ZOLA]] (1937).

Kenny Delmar, who plays the Chevalier as a boy, was the voice of Senator Claghorn on the "Allen's Alley" segment of Fred Allen's radio show.

Despite D. W.'s denials, a strong hatred of Bolshevism partly influenced his depiction here of the French Revolution.

In all his shorts, features and epic masterpieces, Griiffith NEVER used a script! Each day, he'd decide what to shoot and explained scenes and action to actors as they went along.
7 people found this helpful
See all reviews
Back to top
Get to Know Us
Make Money with Us
Amazon Payment Products
Let Us Help You
EnglishChoose a language for shopping. United StatesChoose a country/region for shopping.
© 1996-2021, Amazon.com, Inc. or its affiliates