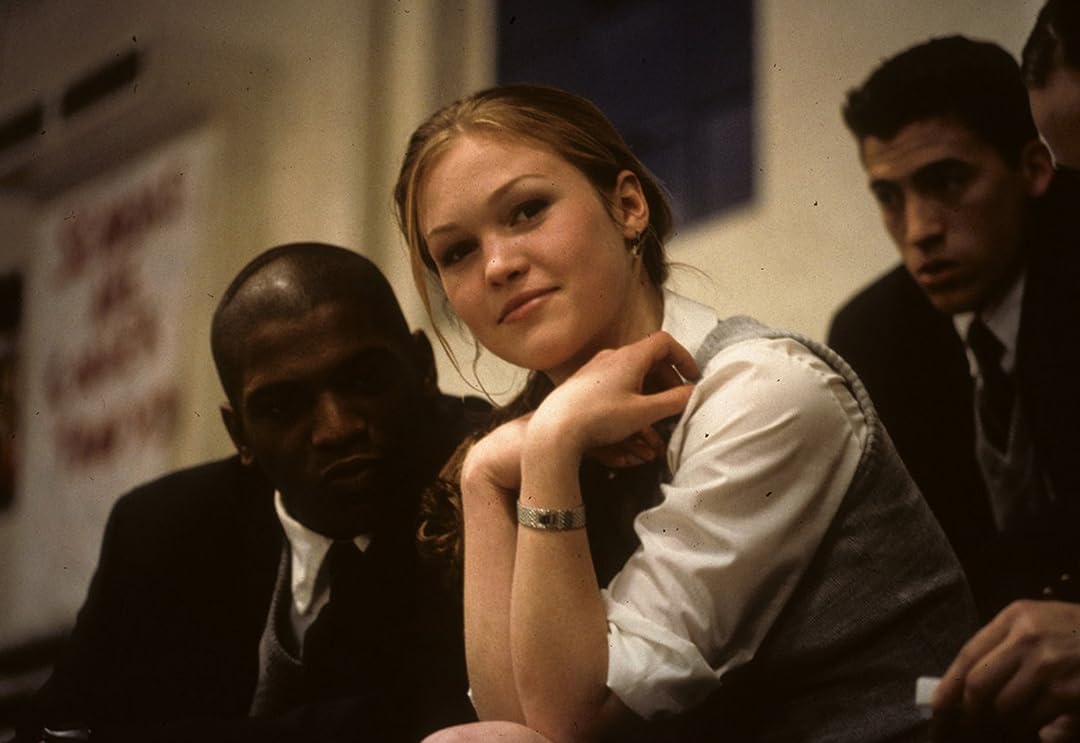 (853)6.11 h 34 min2021R
A young Black man’s conniving best friend convinces him that his girlfriend is cheating on him in a retelling of “Othello” set in the world of high school basketball.

Keon Shere' McIntoshReviewed in the United States on September 13, 2019
5.0 out of 5 stars
Forgot how sick & twisted this movie is
Verified purchase
Great film that never gets old. Mekhi Phifer stars as: Odin James (O)- a hot shot basketball player headed to the pros real soon leading his team to a championship playoff run winning the most valuable player award. While getting praise for his great performance and teamwork, Martin Sheen, the head coach, expresses his love and respect for O where he tells everyone he loves him as if he was his own son which doesn't quite sit too well with his actual son, Hugo (played by Josh Hartnett), who's very resentful of O and all the attention he wishes his father and others would give him. To add insult to injury of the already damaged ego of Hugo, O accepts the MVP award with another teammate and close friend, Mike (played by Andrew Keegan), instead of Hugo which really sets Hugo off to the point of envy and betrayal. Hugo sets every scheme & plan in motion to become O's downfall having him thinking his best friend, Mike, is sleeping with his girlfriend, Desi (played by Julia Stiles). O turns to drugs as a result ruining his good image reputation becoming a wreck and ruins his friendship not trusting Mike. Not to mention, his once great relationship with Desi which is now becoming a bit extreme to say the least. I honestly forgot how sick and twisted this movie was until I went back and watched it. Easily my all-time favorite performance from Josh Hartnett and Julia Stiles is always adorable as usual. But Mekhi's performance really steals the movie with his over the top obsession of Desi being manipulated by Hugo. This film is a must have in your collection and must see for those who've never seen it.
4 people found this helpful

DislocatedReviewed in the United States on July 29, 2019
5.0 out of 5 stars
Decent Adaptation
Verified purchase
Love this adaptation of Othello even when it goes astray a bit from the original plot. Caveat emptor: Be careful if you’re thinking about using it in class. There is a sex scene that cannot be shown in school. It lacks Shakespearean discretion! Make sure you know when it’s happening so you can advance the film to the next scene.
4 people found this helpful

joel wingReviewed in the United States on August 3, 2021
3.0 out of 5 stars
Good modernization but not as compelling as the original
Verified purchase
Jealously, mistrust and manipulation. (O) captures those basic elements of Shakespeare’s play. The movies adds resentment to that list with Josh Hartnett as the Iago character being angry with his father played by Martin Sheen for ignoring him and showing him no love. He takes that anger out on Mekhi Phifer who is the Othello character. I’m a fan of Phifer and he delivered along with the other main characters in the cast. It was a good modernization of the story but didn’t think it was as compelling as the original.

cwilliamsReviewed in the United States on December 8, 2015
3.0 out of 5 stars
the movie vs. the play
Verified purchase
I have always been someone who likes watching something more than reading it. The movie O was not much different from Othello, but it was adapted into a more understandable scenario. The main thing that makes Shakespeare so hard to read, is his use of language. Watching a movie makes things a lot easier to understand, especially when it is set in the 2000s. I liked the seriousness in the text of Othello and it made the severity of the play more extreme. I think the movie O lacked that. Since the movie was set in such a relatable way, with high school students, the movie was easier for me to understand. On the other hand, I think the fact that it was written with such a modernistic approach, made it lose some of the drama of the written play. When Oden is playing in the basketball game and “loses it”, I thought that it was harder to understand why he was acting the way he was in the movie. I also did not think that the relationship between Hugo and his dad mirrored the relationship between Iago and Barbantio in this movie. I think in the text, Iago seemed more jealous and more wanting of Barbantio’s affection, than in the relationship between Hugo and his dad in the movie. The coaches power was lacking and I felt he did not have as much authority in the movie, as his equivalent does in the play. Another thing to mention, is that the racial tension in the play is much more prominent than in the movie. Maybe they had to leave out a lot of the racial comments in the movie for obvious reasons, but I definitely thought that the racial tension was not as strong as it is in the play and it should be highlighted because this is a huge reason of why Othello acts the way he does. Oden, portraying Othello in the movie, is seen as way more popular than Othello is in the play. Oden is seen as the “cool kid” and liked by all of his peers. Othello is seen as more of an outcast in the play, and is rarely seen as a “cool” character. Overall, I do like watching movie interpretations, but it sometimes confuses me on which things are from the movie, and which things are from the original text. I am a visual learner, so I understand things better when I watch a movie or video about the topic, rather than just reading the text. I would say that ultimately I choose watching the movie interpretation, over reading the text, especially with Shakespeare. One must be careful though when choosing a movie to watch, because sometimes the movie’s interpretation can lead the reader astray from what is actually happening in the original text. I did not get too confused with the difference between O and Othello and I think that was largely due to the setting of the movie, versus the play. I would recommend reading the original text and watching the movie adaptation, because I did get a better understanding of what was being told in the text, but do not let yourself blend the two plots together, because they are usually not the exact same.
9 people found this helpful

CRReviewed in the United States on December 12, 2019
5.0 out of 5 stars
Watch and learn sin will always be sin even in a different decade
Verified purchase
A classic even if it was made in the 90's it goes to show Shakespeare left every thing to the imagination except his worlds which are still poinent and relevant today given the urban backdrop of the movie. What a great way to get younger generations to understand the debth of Shakespeare

Mr. YikesReviewed in the United States on June 26, 2007
3.0 out of 5 stars
Bought it for my class but can't show it.
Verified purchase
I thought about teaching it as a modern interpretation of Othello, but there's this long, uncomfortable, sex scene that turns into a borderline rape scene in the middle of it. I'm sure some think it's profound, but frankly, it's pretty heavy handed. I'm teaching at the college level so *can* show it, but it's uncomfortable enough that I don't. Well performed, but aside from that, it relies on and perpetuates stereotypes of black sexuality, violence, drug use, etc. much more than the original without anywhere near the character development that makes the original interesting. From a pedagogical standpoint, I can use it as an excuse for a discussion on constructions of minoritized identity, which is fine and dandy, but then it's not doing its job as a companion piece for Othello to help them deepen their knowledge, except in the most superficial ways. If I wanted to do that, I could assign the old black-face Orson Wells version. As well, I'd rather just assign some James Baldwin if I wanted to discuss constructions of minoritized identity.

As a film, it's a good way to waste an evening. I'd suggest renting it, though I did buy it because I'm also a Mekhi Phifer fan. His acting in the role is much better than the material he is given.

J&AReviewed in the United States on May 7, 2013
3.0 out of 5 stars
Intense
Verified purchase
This movie is intense. It is gripping. I was coming out of my chair in the ending. But the ending is why I gave it 3 stars because I didn't feel like there was enough explanation of why this kid started all the drama. I honestly was so into the movie that when it ended I was baffled about what just happened.
If you like movies about high school kids and the drama they cause and choices they make, perhaps give it a view. I liked it but could only give 3 stars because the main character made extreme choices with very little evidence for why these choices were made. You be the judge.
4 people found this helpful

"fcb_cb"Reviewed in the United States on July 12, 2004
5.0 out of 5 stars
great cast
Verified purchase
This movie is the best remade, Shakespeare movie I think I've ever seen. It doesn't have Shakespeare's script, but it is based on the play very well, except that it is modrenized. Odin, which is the character based on Othello, is played by Mekhi Phifer, and did an excellant job protraying him, is a star basketball player, at his all-white school. Julia Stiles, (Save The Last Dance,) plays his girlfriend Desi. Hugo, who is played by Josh Hartnett (Pearl Harbor,) does a wondeful job of playing everyones friend, and making Odin jealous, becuase he makes Odin think that Desi is cheating on him with his best friend Mike, who is played by Andrew Keegan (10 Things I Hate ABout You / 7th Heaven,) which starts this whole plan to get revenage on Mike and Desi. Very tragic ending, and very well written.
3 people found this helpful
See all reviews
Back to top
Get to Know Us
Make Money with Us
Amazon Payment Products
Let Us Help You
EnglishChoose a language for shopping. United StatesChoose a country/region for shopping.
© 1996-2021, Amazon.com, Inc. or its affiliates