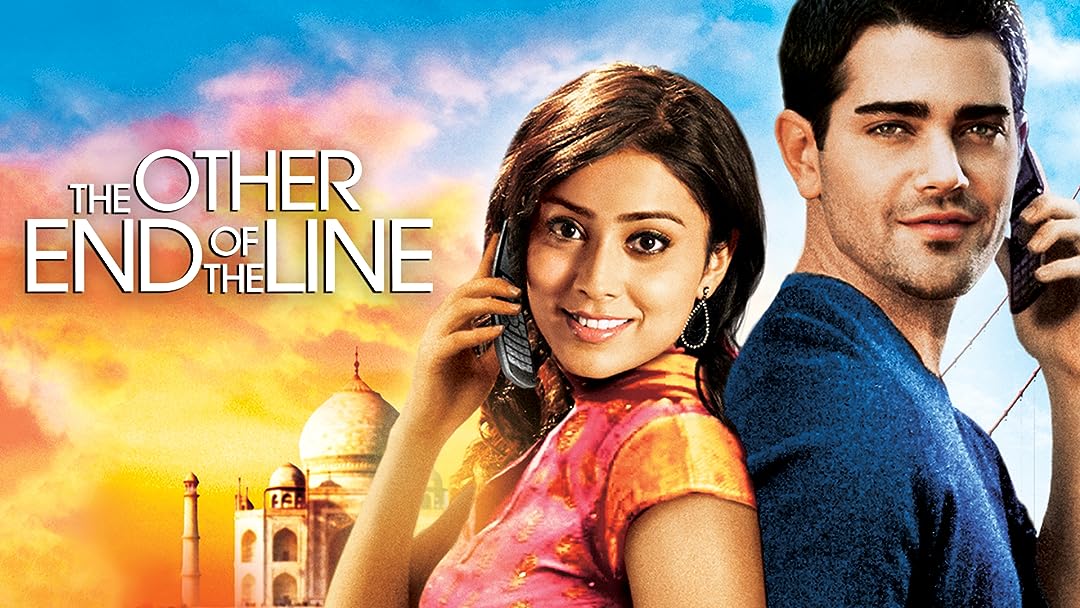 The Other End of the Line

Edward HassReviewed in the United States on March 19, 2015
4.0 out of 5 stars
Boy meets girl movie that does its job.
Verified purchase
You don't watch a "boy meets girl" because you're looking for an intellectually challenging plot. It's been done over and over. What makes it work is actors portraying likable people, and who have the talent and chemistry to allow you to suspend disbelief for a little while. Lastly, it needs just the right amount of silliness to make it fun, without destroying the "reality" of the plot.

This movie succeeds on this level. The male and female leads are both people you like immediately, and can understand how they can fall for each other. The writers give us a good reason for the female lead to take the leap of a trip from India to America to meet the man she's dealt with over the phone. The situations the leads get into don't seem forced, and have the requisite amount of low key comedy to make it enjoyable. Everything else falls into place very nicely.

Why not five stars? Well, it IS a "boy meets girl movie," after all.

H. BalaReviewed in the United States on April 16, 2009
4.0 out of 5 stars
When love calls, sometimes it's from across international waters and has a fake accent
Verified purchase
Sometimes it really does just boil down to the appeal of the actors in the thing. THE OTHER END OF THE LINE tends to get bogged down by its share of cliches and contrived situations, but damn if Indian actress Shriya Saran isn't so endearing onscreen that she pulls and tugs and drags the movie into this side of quite watchable. THE OTHER END OF THE LINE happens to be one of those cross-culture romantic comedies which often gets labeled as sweet and cute but predictable, and, with this movie, that's pretty much on point. But, still, check this out for the terrific Shriya Saran and also for her romantic lead Jesse Metcalf, who rocks them Pete Sampras/Carson Daly looks but who thankfully seems to have more charisma than those two champions of bland.

The plot: Granger Woodruff (Jesse Metcalf) is an up-and-coming New York adman who, whilst falling victim to electronic identity theft, ends up making a strong connection with his friendly credit-card tech support operator, Jennifer David. The phone conversations start out as strictly business, yes, but then something clicks between the two and, soon, their chit chats are wandering into the personal. Since Jennifer is based out of San Francisco, and since Granger has to be there for a crucial business meet, it's only natural that a curious Granger asks to see Jennifer in person.

Ah-ha! but then the rub: Jennifer David from Frisco, it turns out, is actually Priya Sethi (Shriya Saran) who flaunts a flawless American accent and toils at a credit card call center in Mumbai, India. So Priya not only is far, far away from Frisco but she's also engaged to be married, in one of those traditional arranged marriage deals. But Priya nurses a restlessness within her, and she longs for one big adventure before she does get married (her fiance, as we come to learn, is dull as the dickens). So Priya Sethi a.k.a. Jennifer David agrees to a date with Granger and off she flies to San Francisco, her heart a-burstin' and hope, this starry gleam in her eyes.

Absolutely, you've seen plenty of romantic comedies like THE OTHER END OF THE LINE before. But, then again, you don't watch stuff like this for its originality as much as for its familiar warmth and crazy romance and its just plain "comfort food" sensibilitity. THE OTHER END OF THE LINE also functions as an easy intro to Indian cinema. And, believe me, if you at all enjoyed the exotic elements featured here, then experiencing an actual Indian film (whether Bollywood, Tamil, or Telugu) will blow you away. Indian cinema is awesome and will drown you in vivid colors, splendid costumes, all-out musical numbers, unabashed emotion, and sweeping romances. That last sentence is a shout-out for all the ladies who haven't yet experienced Indian cinema. For the guys, all I'll say is that Indian women are absolute hotties. On the down side, Bollywood and its like tend to also indulge in infantile humor and mawkish melodrama, as well as being really long (an average Indian film runs to around two and a half hours). But, odds are, once you get hooked into Bollywood, you're then a fan for life.

If you're hankering for more romantic East Meets West shenanigans, I recommend [[ASIN:B00198TUO4 Outsourced]] (also about a call center romance) and [[ASIN:B00094AS9U Bride and Prejudice]] (which isn't, but it does showcase the stunning Aishwarya Rai).

Going back to THE OTHER END OF THE LINE, the huge plus, as mentioned, is lead actress Shriya Saran, who turns in a self-assured and very sympathetic performance, as well as exhibiting a pretty convincing American accent. Jesse Metcalf is also good. Larry Miller, mischievous in that deadpan way of his, comes in for a great supporting role, playing the owner of an international chain of posh hotels. One subplot centers on Granger Woodruff and his advertising partner struggling to secure the ad campaign for Larry Miller's hotel chain, and it's a tough road to hoe when the most winning catch phrase they can come up with is "Our mini-bars will get you maxi-drunk."

Two miscues really bother me. First, there's an unconvincing scene at a party in which Priya overhears a conversation between Granger and his inebriated buddy and she instantly assumes the worst. To me, this smacks simply of the writer(s) trying to come up with something, anything to generate tension and to temporarily put the two leads at odds. Which is fine, but please come with something stronger and not so trumped-up and lazy. Then there's a scene near the end in which Granger is in the middle of making a toast at his best friend's wedding when he's clobbered by an epiphany and abruptly takes off. Now, given, the man had just realized that Priya is slipping away from him and so he must take immediate steps blah blah blah... But all I could think of in watching that scene is how he left his best friend hanging and probably very unamused. I think these two moments, more than anything else, undermine what otherwise is an entertaining film. See if you agree.

While I dug all the lovey-dovey courtship going on between Priya and Granger, I found the workplace sequences in India to be pretty compelling stuff and very funny. To add to the Ugly American reputation, there seems to be this disturbing insular behavior which the movie attributes to Americans. Thus, polite overseas workers like those in India not only have to pretend to an American accent but also must attend classes on American pop culture. Else, the American customer may not be so accepting. And, sadly, that's probably a valid thing. It's funny that the most undesirable assignment for these overseas operators is the New Jersey section, with its hordes of rude, profane customers. Basically, all new hires start out in Jersey and must work their way out. Which just goes to show that everyone really does poke fun at Jersey. It figures.

3.5 out of 5 stars for THE OTHER END OF THE LINE.
19 people found this helpful

Rae B.Reviewed in the United States on May 4, 2022
4.0 out of 5 stars
Enjoyable
Verified purchase
I always enjoy Jesse Metcalf! He's not only great to look at but is a good actor and always stars in interesting movies and shows. This movie has a more unique premise than most as it ties in with two countries and cultures. Thankfully there are very few subtitles as most of the scenes are in English. The story was cute and the movie enjoyable.

Kari R.Reviewed in the United States on December 13, 2021
4.0 out of 5 stars
A nice twist on a boy meets girl romantic comedy
Verified purchase
Don't let the porn-like opening scene turn you off to this fairly clean flick. The naughty beginning actually gets a thumbs down from the movie itself. There are a lot of sexual innuendos and a sex-starved she-wolf, but this story is truly pg-13 and has a moral premise. The writing is creative and the back and forth from India to California adds an interesting element.

MurphReviewed in the United States on April 18, 2015
5.0 out of 5 stars
but even I enjoyed this movie
Verified purchase
Ok, so its a chick-flick, but even I enjoyed this movie. More importantly my wife and daughters all liked it so much after seeing it on Netflicks, we had to order it in hard copy. The on screen chemistry between the two leads is impressive, and makes it feel real rather than a contrived Hollywood movie. Also the lack of graphic sex was really, really refreshing, since it seems all you need to be a female star in Hollywood these days is the ability to take your clothes off fast, and moan well. The Kardashianization of Hollywood is depressing.
7 people found this helpful

The OReviewed in the United States on September 6, 2021
4.0 out of 5 stars
Nothing spectacular but cute
Verified purchase
If you like Hallmark movies, you'll like this one. It's a cute, sappy story that's mostly plausible with a bit of suspended belief. The writing, direction, and acting aren't Oscar-worthy but it's an enjoyable couple of hours.

Amber Y.Reviewed in the United States on December 23, 2021
5.0 out of 5 stars
Cute
Verified purchase
I enjoyed this film, it was cute even though it was pretty unprofessional of both characters to meet up for a date. There isn't an explanation of where the couple will live after they get together, India or America.

Amazon CustomerReviewed in the United States on August 1, 2012
5.0 out of 5 stars
I have enjoyed watching this movie it made me laugh!
Verified purchase
I saw this movie on tv but I did not get the name of it. I enjoyed it so much. I saw it again on netflix but still forgot to write the name down. I have been looking for it off and on but could not find it until I did a search online and got the name of the movie. I was suprised to be able to watch it on amazon. I have enjoyed it more now than when I first saw it.

I noticed some of the reviews are very intense. It is a comedy and written to entertain and amuse. I did not take the movie very seriously and just watched it to enjoy it and I laughed and had a good time.

After a hard day at work I watched this movie and I was able to laugh and have an enjoyable evening watching this movie. It more than met my expectations of being a funny movie.
2 people found this helpful
See all reviews
Back to top
Get to Know Us
Make Money with Us
Amazon Payment Products
Let Us Help You
EnglishChoose a language for shopping. United StatesChoose a country/region for shopping.
© 1996-2022, Amazon.com, Inc. or its affiliates