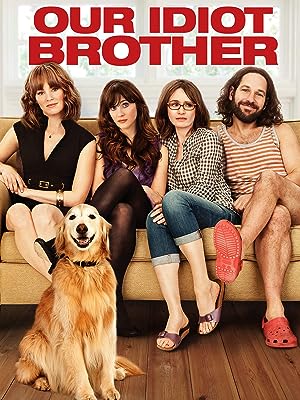 (1,102)
1 h 29 min2011R
Ned (Paul Rudd) means well, but has no common sense. When he barges into the lives of his three sisters (Emily Mortimer, Elizabeth Banks, and Zooey Deschanel), hilarity ensues.

Northern TownReviewed in the United States on February 6, 2020
2.0 out of 5 stars
Great Cast ... Underwhelming, Not Very Amusing Story
Verified purchase
I had higher expectations due to the cast abilities, and had hoped for the kind of amusing, real, disfunctional family comedy that we all appreciate. I wanted to like the film, but I found that I did not much like most of the characters. I can connect the dots as to why the filmmakers may have thought certain scenarios of dialogues might have been funny; but it was mostly underwhelming and even popular actors here seemed flat.

If you want a movie that delivers on amusing and touching disfunctional families with characters you lean toward loving despite all of their shortcomings ... I suggest The Family Stone (Rachel MacAdams, Luke Wilson, DIane Keaton, Sarah Jessica Parker) and Parenthood (Steve Martin, Mary Steenbergen, Martha Plimpton, Keanu Reeves, Dianne Wiest, Rick Moranis, Tom Hulse). Both of those films include real life stressful family circumstances that must be weathered, yet both films definitely manage to inspire and highly amuse. Ie. Despite very serious and real issues common to families, the films are NOT heavy and depressing. You end up enjoying seeing all of the characters, whether you like 'em or not. They are great.

Here, the characters were not memorable, although I did find Paul Rudd's character likeable.

Michelle A.Reviewed in the United States on June 8, 2021
5.0 out of 5 stars
Feel good favorite!
Verified purchase
I bought this to add to my online collection, since I had it on DVD before. It's such a feel good movie, & I've always thought Paul Rudd was so adorable. 😉

The entire cast is great, Steve Coogan, Adam Scott, Zooey Deschanel, Emily Mortimer, Rashida Jones & Elizabeth Banks. They all mesh perfectly for the story of a naive, lovable guy who believes if he sends out positivity to the universe, the universe will send it right back! (Even if his three sisters are crazy!)

Ned gets out of prison after 8 months, where he was "most cooperative inmate of the month three months running"! He's just "an organic farmer who made a mistake"! (Selling weed to a uniformed small town cop at the farmer's market because the cop told him he was having a hard week & really needed it & Ned truly felt sorry for him!)

After prison, he goes home to find his hippy pacifist girlfriend has already replaced him on the farm with another guy remarkably similar! So begins his saga of rotating through each of his sisters' abodes & personal lives, wreaking total havoc like a huge, gangly, good naturedly oblivious puppy! (Liz talking to Miranda & Natalie: "can't one of you take him!?" haha)

There are just so many lol moments, hilarious family & interpersonal dynamics, & innocent total truth telling, that just do yourself a favor & WATCH THIS MOVIE!

The music is great too, from Tie a Yellow Ribbon 'Round the Old Oak Tree, to Willie Nelson songs, & my favorite acoustic at the end sung in a modern/folksy kinda way about "wherever I go, I'm taking you with me, wherever I go, you're coming along."

You'll wish you had an "idiot brother" by movie's end.

joel wingReviewed in the United States on March 29, 2021
3.0 out of 5 stars
Paul Rudd's sisters blame him for everything but he's the only honest one out of them
Verified purchase
Paul Rudd is a good guy who just got out of prison and goes between his sisters (Elizabeth Banks, Zoey Deschanel, and Emily Mortimer) who are all going through different issues. Despite what you might think about the title this is not a comedy. Instead it’s about all the problems Rudd’s sisters have. They are dysfunctional bunch. The irony is that they all blame him for what’s going on, but he’s the only honest one out of them.
One person found this helpful

Movies Are CinemaReviewed in the United States on May 30, 2019
3.0 out of 5 stars
Dumb Hippie Creates Family Turmoil Yet Brings Sweet Reward In Conclusion.
Verified purchase
The last of the hippies manages to create turmoil with his sisters, all of whom have relationship issues with spouses or significant others. While the laughs are few and far between, and it takes awhile to get where it is trying to go, the story here wraps up in a very rewarding way. The ending makes this film worth the journey and wraps things with a bow.
One person found this helpful

Andrew LynchReviewed in the United States on February 14, 2015
5.0 out of 5 stars
Very well done.Funny comedy from Paul Rudd
Verified purchase
I thought this was a funny film from a good cast of people. Paul Rudd plays a burnout who is just,well....kindof an idiot. But not in any bad way always harmless however there are reprecussions to his actions.However i look at it like he brought his family closer together and everybody learned and benefited.Except for his shrew of a pacifist girlfriend.The movie is loaded with everything from drama that is real to life,love & how it makes us act and just downright funny,humourous movie. Don't listen to the negatives this is a classic like I Love You Man,40 Year Old Virgin,Knocked Up,Forgetting Sarah Marshall.You wont be disappointed,this will keep you laughing.Elizabeth Banks looks so nice in this film,because unlike most films where she is blonde her hair is black.Regardless of the color of her hair she is an amazing actress & absolutely beautiful.
2 people found this helpful

garthw1Reviewed in the United States on December 10, 2011
5.0 out of 5 stars
Unheralded Gem
Verified purchase
Really, this movie is a simple morality play: the problems come when the characters let shallow considerations get in the way of a simple, basic value. Love, in this case (and truth, as the essential test of love). But not "love" in the sense of a typical romantic comedy. Love between brother and sister, sister and sister, uncle and nephew, partner and partner. Man and dog. It accomplishes absolutely everything a movie of its type could hope to accomplish -- thus, the 5 stars.

It's hard not to describe this movie in a way that doesn't sound cliche -- it is in a way following a well-trodden path. But cliches be damned, this film is charming, and not for lack of a better description. The movie is charming in all of the best senses of the word. When you think of "charming" in the context of other films, the weakness of description is the fault of those other movies, not this one. The characters are quirky "types" but they effectively convey that there is a little bit of each one in all of us -- the characters don't wind up feeling like stereotypes. Instead, they feel real and totally sympathetic even though the comedy format doesn't attempt (or allow for) any sort of deep character development. You wind up loving them, warts and all, without feeling like you were cheated by cheap tricks and empty shells -- not an easy task in the comedy genre.

The actors are wonderfully cast. Paul Rudd is the "idiot" hippy brother, and he manages to somehow be totally endearing in the role while being (if this is even possible) almost understated in the role. Zooey Deschanel is the new . . . well, Zooey Deschanel (fell in love with her in Elf before I ever knew her name). Charming, beautiful, so authentically quirky, her offbeat comedic talent perfectly complements Rudd's low-key portrayal. Elizabeth Banks is perfect as the climbing fashionista sister. She reminded me of a less attention-demanding version of Parker Posey, with a similarly keen understanding of ironic comedy and timing (which I consider a very high compliment -- I love Parker Posey). Emily Mortimer, the third sister, is overshadowed by her counterparts, but that's by design, and she totally fulfills the role -- there are only so many glory parts in any movie. I don't know if it was intended as a Paul Rudd vehicle, but it comes across much more an an ensemble film, with each actor contributing significantly to its success.

This is not earth-shattering film-making, but it's a light comedy for crissake. It's the kind of movie I can imagine seeing played over and over again on non-premium cable channels . . . and that I would be more than happy to watch again every couple of years when I was in the mood for something that could touch the heart without weighing it down. I think this is an unheralded but possibly lasting gem. Badly marketed (I at least was hesitant to rent it based on the marketing), but brilliantly cast and really well written. Watch the movie -- you won't be disappointed. Unless you are essentially mean spirited and possibly evil.
6 people found this helpful

David E. BaldwinReviewed in the United States on December 25, 2011
5.0 out of 5 stars
All I Want For Christmas Is A Great Paul Rudd Movie
Verified purchase
I love Paul Rudd. This guy can do no wrong. He should be a superstar. He's probably underappreciated because he takes a lot of chances. Instead of going the blockbuster route he takes off-the-wall parts in small disarming films like this one. His Ned Rockland might be his most disarming and indelible screen role yet. The film starts with Ned selling weed to a uniformed police officer. After his release from prison circumstances lead him to live with his family. Ned is a trusting soul who takes people at face value. This trait is born more out of naivete then idiocy. Each of his three sisters have built lives that are as precarious as a house of cards. When Ned comes into their lives his blunt honesty causes the charades they've each devised to come tumbling down. The results are both heartbreaking and heartwarming. This is easily one of the funniest films of the year.
6 people found this helpful

atomicReviewed in the United States on December 4, 2011
5.0 out of 5 stars
Really Good Movie
Verified purchase
I went into this movie with low expectations, the title turned me off because of the plot line it implied. I was pleasantly surprised. The plot is fairly complex, the characters have good depth, its funny in a low key way, there is some drama and suspense, but best of all is how good this movie makes you feel. I don't like chick flicks or mushy movies, and this was neither of those. But the movie makes you feel warm inside and makes you want to be as good and honest to the people in your life as Paul Rudd was with the cast members. Its not only enjoyable while you are watching it, but I found myself thinking about it and smiling for days afterwards. If you're looking for something to put you in a good mood, see this movie.
14 people found this helpful
See all reviews
Back to top
Get to Know Us
Make Money with Us
Amazon Payment Products
Let Us Help You
EnglishChoose a language for shopping. United StatesChoose a country/region for shopping.
© 1996-2021, Amazon.com, Inc. or its affiliates