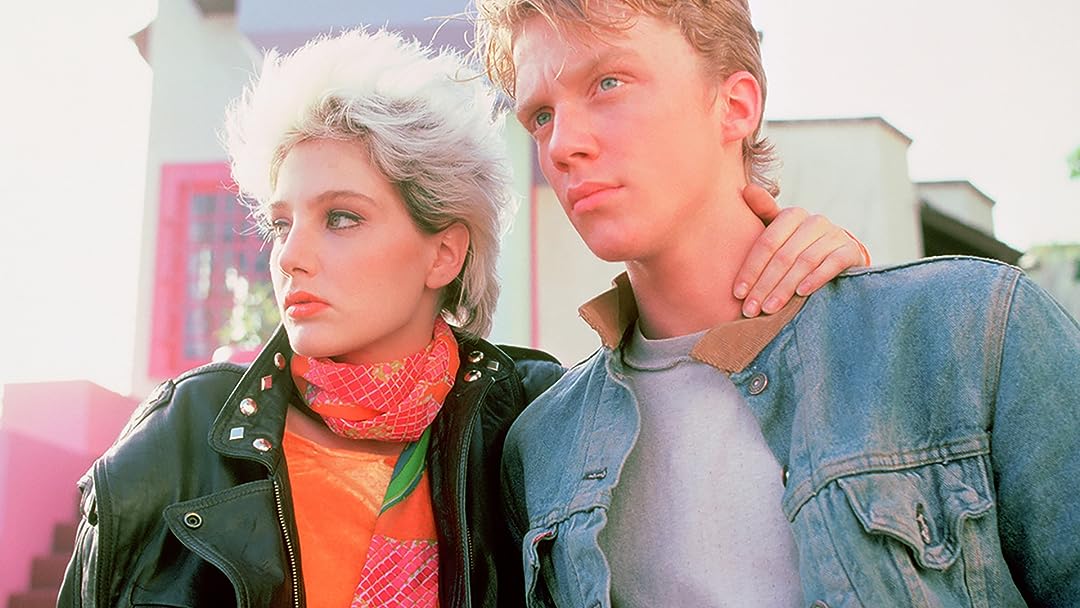 (184)
5.41 h 32 min1986R
Daryl's parents ship him off to the big city to live with his brother, hoping he will have a better life there. After a baggage mix-up at the airport, Daryl finds himself in possession of a drug cache, which a drug dealer wants back.

LarryReviewed in the United States on September 3, 2017
5.0 out of 5 stars
Great movie! Anthony Michael Hall is more than just a geek!
Verified purchase
I'll never understand why this movie isn't available on Blu-ray/DVD yet. It's a great film. Anthony Michael Hall gets to show that he's more that just "the geek". The supporting cast is very good. Out of Bounds is action packed with a good script to support it. The soundtrack fits the film well. I look forward to the day this film gets it's due!
10 people found this helpful

Rochelle D. AdkinsReviewed in the United States on November 25, 2016
4.0 out of 5 stars
Great movie if you're nostalgic for the 80s
Verified purchase
I came across this movie when I was surfing through the Amazon videos. It immediately made me nostalgic for the 80s so I just had to rent it. I still love the premise of the movie and I think Anthony Michael Hall did a superb job. But somehow, I thought it was better back in the 80s. It was a little more believable back then. Maybe that's a testament to how over produced most movies are in present day. I gave it 4 stars because it was a great trip down memory lane but didn't give it a full 5 stars because it wasn't that believable and the quality of the film was not that good (it needs to be digitally re-mastered).
4 people found this helpful

Paula J. BettencourtReviewed in the United States on November 23, 2011
5.0 out of 5 stars
Why isn't this movie available on Blu-Ray yet.?
Verified purchase
Yes .Hi.
Shame on Sony pictures.
Fans of this film deserv so much more/but I guess they don't care.
I can see however.That Sony pictures is trying to give their customers a option to view this film in decent quality.
However.Sony pictures still has no good excuse fore not putting this film on disc.
I still feel that this film would look and sound a lot better on BD.
So I still think strongly.How dare you Sony pictures.!!!!!!!!!!!!!!!!!!!!!!
I call Sony pictures all the time.
And all I get is there is'nt enough demand to put this film on disc.
I guess that's why a lousy DVD-R of the film just dubbed straight from a old VHS tape is still selling on ioffer.
And you can get a DVD-R of the film that has been burned to a DVD -R.Which was taken from on demand standard def.
Why is that Sony pictures.?Ha.?
So. I bough the amazon instant video download.
Decent/but not great qulity.
As far as those old VHS tapes go.
At $ 49.95 and $ 89.95.
The sellers must be on some heavy drugs.
And anyone who pays that much for some crappy VHS tape.
Should have their head examined.!!!!!!!!!!!
Because the amazon instant video is better then crappy VHS.
Any day of the week.!!!
And twice on a Sunday.!!!!!!!!!!!!!!!update. I have rewatched the amazon instant video.
And it really is very high quality.
However.That does not change the fact that I still very much want to see this film on BD.!!!!

Amazon CustomerReviewed in the United States on August 18, 2021
5.0 out of 5 stars
Out of Bounds has Jeff Kober!!!!
Verified purchase
This is one of my all time favorites . . and who doesn't like a flashback to the 80s. From the fast-paced drama, the burgeoning love story, a great protagonist (Kober) and it all takes place in L.A. . . it's got drugs, guns, murder and romance.

DJBReviewed in the United States on March 10, 2013
4.0 out of 5 stars
An Under-rated, Yet Fun Action Thriller
Verified purchase
Critically maligned when released back in 1986, this action-thriller shows teen star Anthony Michael Hall breaking out of his previous image as a high school nerd. It's basically about any thing the can go wrong, pretty much does. Darryl Cage (Hall), a farm boy from Iowa, moves to Los Angeles following his parents separation. When in L.A., he hooks up with his brother and tries to start a new life. This all gets up ended, when Cage grabs the wrong duffle bag at the airport which contains over a million dollars worth of heroine which belongs to a ruthless and sociopathic drug smuggler Roy Gaddis (Jeff Kober). Cage's brother and sister-law are found by him the next day murdered, for which he is framed for. Now on the run, Darryl is pursued by Gaddis, corrupt cops and the L.A.P.D.. With the walls closing in on him, Cage turns to a young and wild actress wannabe named Dizz (Jenny Wright) with whom he first met on the plane. Cage and Dizz team up to clear his name and capture Gaddis along with his accomplices. For those who want a fun '80s action movie should find plenty to enjoy here. I watched this after almost 25 years, and it's still a fun movie that brings back plenty of great memories of my teen years. Since this is not available on DVD, this digital streaming format is great for people who want watch it for the first time, or want to relive their memories like I did.
4 people found this helpful

Debbie StimesReviewed in the United States on September 19, 2019
5.0 out of 5 stars
Good action flick
Verified purchase
Such a great but underrated Anthony Michael Hall movie!
3 people found this helpful

HeadNtheCloudsReviewed in the United States on February 8, 2014
5.0 out of 5 stars
One of the Best 80's Flicks
Verified purchase
I love this movie & remember seeing in the 80's because of Siouxsie being in it. Whether you live in LA or not, it is fun to see the old Hollywood & AMH is great in it with the girl. This has non stop action the whole movie & isn't goofy or too campy. It reminded me of an old Dirty Harry movie with even more action.
This is when AMH went from cutesy teen movie to a more grown up, good looking & serious actor. I am so glad that it was released as a digital download at least.
This movie was so under rated & hardly known about. Yaaa, I LOVE this movie!!
4 people found this helpful

Todd H.Reviewed in the United States on November 12, 2020
5.0 out of 5 stars
UNDERATED CULT CLASSIC
Verified purchase
I saw this movie when it came out in the 80's and loved it!
I wanted to watch it with my wife but couldn't find it anywhere for free
I rented it and it was well worth it! wife loved it too!
it is packed with action, music, romance and a great plot! i highly recommend
See all reviews
Back to top
Get to Know Us
Make Money with Us
Amazon Payment Products
Let Us Help You
EnglishChoose a language for shopping. United StatesChoose a country/region for shopping.
© 1996-2022, Amazon.com, Inc. or its affiliates