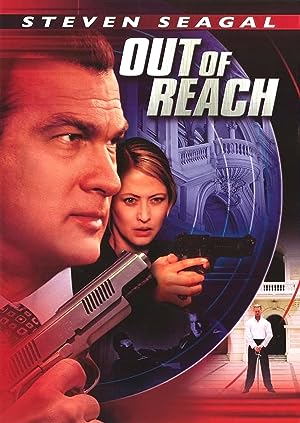 (360)
4.01 h 25 min2004R
Action superstar Steven Seagal ("Cradle 2 the Grave," "Exit Wounds") stars as a government agent-turned-survivalist from Northern Alaska who works on a wildlife refuge and sponsors a young girl in an International foster program.

Joe SmartReviewed in the United States on July 21, 2015
3.0 out of 5 stars
Ridiculous but (gasp) actually fun
Verified purchase
Way above average for a straight-to-video Steven Seagal movie, Out of Reach has an outrageously unlikely premise and isn't afraid to have fun with it. Basically Steven Seagal works with wildlife that are injured but once upon a time he was a seriously dangerous dude doing bad things for our government--and his former employers would like him dead in case he decides to write a tell-all book so he keeps a very low profile. But he has one vulnerability--he sponsored a little girl in an orphanage in Poland and through the letters they write back and forth she has become his only friend and he is teaching her various types of coded cyphers.

Unfortunately the orphanage actually funnels young teenage girls into white slavery. When his pen pal disappears Seagal travels to Poland to find her and in the process take down a white slavery ring that has eluded the local authorities for years.

The villain in Out of Reach is as much of a hoot as the goofy set-up. He seems to live in the Taj Mahal his home is so immense. He keeps Seagal's little friend around because he admires her intelligence, her ability at chess and her interest in cyphers. He fences like an old-style upper-class villain played by Basil Rathbone once upon a time in Errol Flynn movies which eventually leads to a sword-fight showdown with Seagal. When the bad guy realizes who is on his trail rather than do the ungentlemanly thing and simply dump the girl and disappear for a while he not only keeps her close by but even allows her to leave coded-cyphers for her would-be rescuer--unfortunately she doesn't realize her captor can read them as well. My favorite is the message she leaves by rearranging a tray of sushi at a posh embassy gala--the message warns that it's a trap and the bad guy goes out of his way to make sure Seagal gets the girl's coded message, possibly to make things more sporting.

I was never a Steven Seagal fan when he was actually a movie star--his acting range was limited to saying his lines coherently, he always seemed too pleased with himself and he struck me as being immensely less likable than Jean Claude Van Damme, Sylvester Stallone, Chuck Norris or Arnold Schwarzenegger. That said I do like two of his straight-to-video flicks--this one and Belly of the Beast which was directed by A Chinese Ghost Story's Ching Sui Tung. If you are a genuine Steven Seagal fan unlike me you can probably add another star to my review.

MichaelReviewed in the United States on July 8, 2008
3.0 out of 5 stars
Worth Reaching For
Verified purchase
I just finished watching "Out Of Reach", and unlike the easily-definable DTV hits and misses like [[ASIN:B000VECACQ Urban Justice]] and [[ASIN:B00083FZEU Submerged]], I'm thoroughly undecided about whether or not I like the movie or not. Sure, it's nowhere near the quality of Steven Seagal's theatrical work, but it fails to suck a'la [[ASIN:B00009ZPTZ Out for a Kill]]. It's got plenty of unlikable attributes that would ruin any other film, but the question that must be considered for all Seagal-starring flicks is whether or not its pluses outweigh its negatives. Let's look at it in an orderly fashion; maybe coming to a conclusion that way will be easier.

Story: Seagal is a reclusive ex-agent spending his time tending to injured woodland animals and writing to his pen-pal, 13-year-old Polish orphan Irena (Ida Nowakowska). When the girl is kidnapped by an international human trafficking ring, Seagal kicks butt to get her back.
Now that Liam Neeson's [[ASIN:B001TODCII Taken]] has been released, the story will be considered old-hat but nonetheless proves serviceable. While some of the chance happenings border on the ludicrous, the plot's not bogged down by endless sub-tangents and convolution. Straight-arrow is good for Seagal, even if you have to bend reality to keep it that way.

Acting: Fans know not to expect a lot from Seagal and they shouldn't change this prejudice for this one. Steven's his same old mumbly self but bad-guy Matt Schulze (playing almost the same role he did in [[ASIN:B00008AOVL The Transporter]]) bests him for over-the-top hamminess...in a bad way. The rest of the cast is pretty acceptable, though: hero cop Agnieszka Wagner ("Thomas the Falconer") and baddie agent Robbie Gee ([[ASIN:B0000VAFO0 Underworld]]) don't discredit themselves, and young Ida Nowakowska is pretty good for a Polish girl reading and English script (her friend Jan Plazalski, on the other hand, could be the best child actor in the world but it wouldn't show through the completely weirdo role that was written for him).

Action: Most of the hand-to-hand action is quick and one-sided, but the choreography is fine and Seagal didn't call in too many stunt doubles this time around. A couple of solid gunfights distract from the lack of car chases. As a treat, the final showdown between Seagal and Schulze is a swordfight in a courtyard: it's nowhere near as fast-paced, lengthy, or exciting as the ones in [[ASIN:6305168873 Marked for Death]] and [[ASIN:B0006VL1IS Into the Sun]], but is undeniably styled like a John Woo scene and therefore art-y enough to be appreciated.

Production: The editing is solid and without obvious glitches, though a few too many scenes feature off-screen voiceovers. Even worse, about a third of Seagal's dialogue is dubbed by another actor - one that sounds absolutely nothing like him - as well as a few of Matt Schulze's lines. The shooting locations aren't as drab as most of Seagal's made-in-Europe fare tends to be, with decent cinematography keeping most shots worth looking at.

I think I'm warming up to the movie, but purely because it's a Seagalian feature. Non-fans of his don't even need to think about checking this one out. The use of the very real crime of human trafficking as a plot device is realistic without being exploitive and is generally handled very well by director Po-Chih Leong ([[ASIN:B000056VOT Immortality]]). Seagal's more likeable in this film than he had been recently, by way of his connection to the young girl via secret codes he taught her. The lengthy dubbing really gets on your nerves before long, though, and is probably the major reason why many perople don't approve of this one. In short, there are most definitely better DTV titles that our hero has done, but even if it's at the bottom of the "acceptable" rung, "Out Of Reach" fails to fall into the category of Seagal's bad movies. Fans will no doubt remain divided in opinion, but for what it's worth, it's staying on my shelf.
2 people found this helpful

BeastNYCReviewed in the United States on March 5, 2010
3.0 out of 5 stars
When The Predator Becomes The Prey...
Verified purchase
"Out Of Reach" was a decent Steven Seagal effort. The plot was: William Lansing's pen pal gets kidnapped by an illegal human trafficking ring. Matt Schulze a.k.a "Chupa" from "Blade II" plays the very creepy villain Faisal. Also, in this film was Robbie Gee a.k.a "Kahn" from "Underworld".

The sword fight finale between Lansing and Faisal was short, but sweet. This scene was reminiscent of "Marked For Death" when Seagal fights the second & final "Screwface" at the end. Ahh nostalgia ...

The voice dubbing that people criticize is only obvious in 3 scenes. The 3 voice-overs don't take anything away from the film. The voice dubbing was not as diabolical as "Attack Force" or "A Dangerous Man". The dubbing was done when the girl was reading the letter and when Seagal is thinking on the computer. The only obvious one was during the shoot out at the brothel. Steven Seagal voiced the majority of the lines himself (probably 90%).

The shoot out at the brothel was fan-F'n-tastic. Seagal was shooting at Robbie Gee and his cronies. Seagal turned that place into the "Bordello of Blood" better than "Tales From The Crypt"!!!

Overall, I give this movie 3 out of 5 stars. You have to admire the noble task that William Lansing embarked on. There is right and wrong in the world. Lansing was a hero. Seagal kills the villain Faisal with a "Samurai Showdown" move.
3 people found this helpful

Judi BReviewed in the United States on May 13, 2017
4.0 out of 5 stars
Not his best but certainly not the worst either, I like it
Verified purchase
Being a big Seagal fan its hard for me to not like any of his movies. I thought this one was decent, I liked the aspect of his relationship with the little girl, seems like that could've been expanded on just a bit more. The only thing that I hate is when I run across the voice-over's where its not Seagal talking its some other guy that doesn't sound like him at all. Its distracting and annoying and why can't he do his own lines??? Aside from that, not bad, I'll watch it again before my rental expires.

Joseph FerraraReviewed in the United States on October 4, 2019
4.0 out of 5 stars
Out of Reach
Verified purchase
Good solid steven seagall movie not the best... But still good mid level mid career film by the martial arts star.

Chuck FilsonReviewed in the United States on June 29, 2020
4.0 out of 5 stars
Pleasurable viewing
Verified purchase
I enjoyed this movie, it wasn’t his typical type of movie, though there was violence, it wasn’t as viscous

OllieReviewed in the United States on December 21, 2004
2.0 out of 5 stars
Say your lines damn it!
Verified purchase
The end product would of been much better if Seagal had done his own voice dubbing, with another fight scene thrown in around the middle and an extension to the end confrontation and we would of had a winner in the same vein as Belly Of The Beast only better. We also get 2 Seagal's in this. For the first half of the movie he looks like the same Steven Seagal from Belly Of the Beast but by the end we have a quicker leaner Seagal from the past. There was enough money spent on this but the end result is not worthy of all that cash. How much does it cost to film two people hitting each other for a few minutes! The thing that really ruins this movie and knocks a star of this review is the use of some other actor's voice instead of Seagals. This was also present in Out For A Kill and Belly Of The Beast but to a much greater extent in this one. Not as good as Belly Of The Beast, On a par with The Foreigner but much better than Out For A Kill. Hopefully Into The Sun will continue the upward trend in Seagal movies in terms of production values and entertainment value and lets hope he never drops to the low that was Ticker ever again.
4 people found this helpful

ChrisReviewed in the United States on July 4, 2016
1.0 out of 5 stars
Idiotic.
Verified purchase
Idiotic, worst rental ever. Clearly reflects Steven Seagal's self-obsession to play the action hero who always saves the little kid and the world at the same time. Sad, really, since I was initially interested in the story line and honestly wanted to like it.
See all reviews
Back to top
Get to Know Us
Make Money with Us
Amazon Payment Products
Let Us Help You
EnglishChoose a language for shopping. United StatesChoose a country/region for shopping.
© 1996-2022, Amazon.com, Inc. or its affiliates