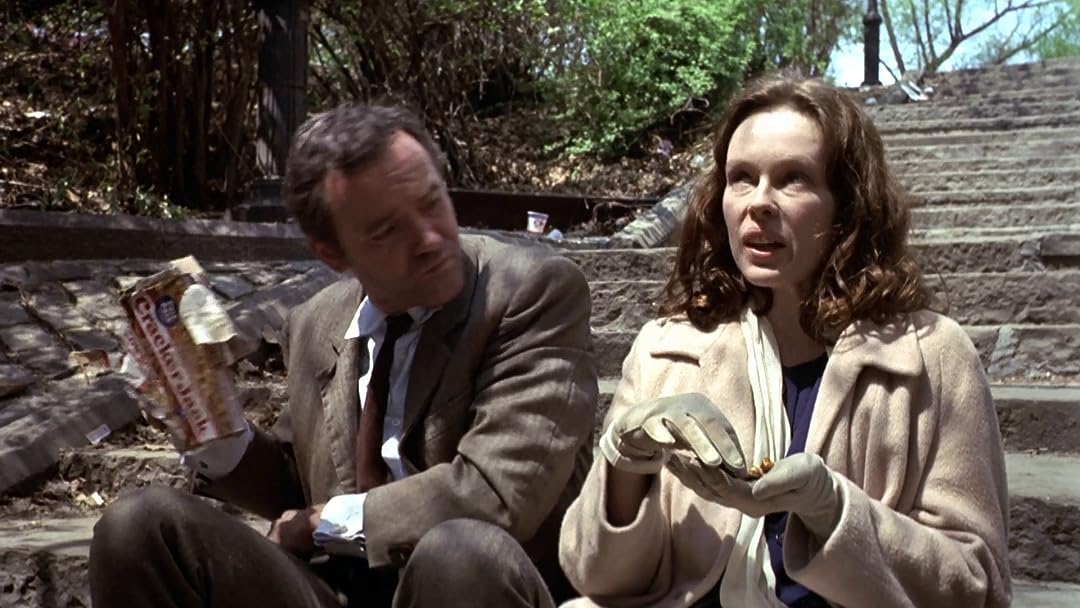 The Out of Towners

(1,486)
7.11 h 37 min1970X-RayG
The top candidate for a prestigious promotion at his company's corporate headquarters in New York City, George, accompanied by his wife Gwen is all set to take a bite out of The Big Apple.

Melody M.Reviewed in the United States on January 16, 2020
5.0 out of 5 stars
Reminds Me Of The Good Old Days
Verified purchase
My dad grew up in NJ and hung out in NYC all the time and went to college there. My mom grew up on a dairy farm in NH. Dad moved to NH and met her at a Grange meeting. This was back in 1971. For a date dad took mom to NYC to show her around his old stomping grounds. He told her it would be amazing and she would love it. They get there and a guy gets mugged in front of them. His head was smashed into a building and it exploded right in front of them!! Then they go to a movie and hear a very loud "person" munching popcorn behind them. They turn around to shush the person and it wasn't a person!! It was a giant rat!!!!!!!!!!! Mom was petrified and being a country girl was trying to pick up people who were laying on the street to try and help them!! My dad was telling her to stop before they got killed!! 1972 and I'm born. All through my childhood, in the 1970s, we went back and forth to NYC seeing things that you cannot see anywhere else. Muggings, murders, robberies..............you name it!!! The last time dad went before he died was about 2014. He was alone and grabbed a bus back to NH. He had a terrible cold. When he got to NH mom noticed something "off" about his pants. Someone had taken a knife to his back pockets without dad noticing!! The funny part??????? They didn't get his wallet. He was NYC smart so it was well hidden elsewhere. So what did they get????? All his dirty snot rags!! I love when robbers get what they deserve!! LMAO!! So many memories of that dirty disgusting city. And the Waldorf? My uncle, Charles Luciano, (AKA Lucky) used to live there back in the day!!
22 people found this helpful

Isaac LaughhunnReviewed in the United States on February 28, 2018
5.0 out of 5 stars
A Comedy Classic
Verified purchase
I very rarely laugh out loud at movies or TV shows; this is the only movie I have ever laughed all the way through. A perfect comedy. The genius in the writing and acting is that the movie seems wild and crazy and yet realistic. It takes genius to walk that fine line. We have all been on "out-of-town" trips where everything seemed to go wrong. The movie builds and builds, never letting up. The film features many supporting players but is basically carried by two people- Jack Lemmon and Sandy Dennis, which is quite an accomplishment. What a unique and well done comedy.
25 people found this helpful

Amazon CustomerReviewed in the United States on October 17, 2019
5.0 out of 5 stars
GEORGE.....GEORGE......GEORGE....GEORGE......GEORGE
Verified purchase
This movie was originally released in theaters in 1970 (just a year shy of being 50 years old) Jack Lemmon and Sandy Denise are great together in this movie. From the moment the two of them got on a plane to NY city always something that would come up to make anyone just turn around and go back home butt the two push on through all there set backs. OOOOH George. (Try to count the number of time she says George in this movie) LOTS of times. I really like both of these actors especially Sandy Denise who acts like your every day person.
Highly recommend the movie its nutty and funny and isn't that far off the beaten path of something that can actually happen in real life.
8 people found this helpful

MeemeReviewed in the United States on January 17, 2021
2.0 out of 5 stars
Didn't like
Verified purchase
I like the old movies usually, but this one was too frantic for me. Jack Lemon can be fun to watch but in The Out of Towners he is non-stop uptight, over-hyped and a nervous wreck and it just gets old-----fast!

The plot revolves around a couple from Ohio seeking employment in New York City. You name it, it goes wrong. From a delayed landing and forced detour to Boston to lost reservations, muggings, Central Park Mayhem, place chases, etc, etc, it never stops to even catch your breath once. It's not slapstick but along the same over-hyped pace. I had a tight stomach from start to finish and could hardly wait for the movie to end. Lemon's character was just annoying and drove me nuts. I didn't laugh or even smile even once during the whole hour and a half. I will never watch again. It wasn't even mildly entertaining or plausible in the least. There are funny movies from this era or a little before, like Mad, Mad, Mad, Mad World, which grows into a fast pace. But any movie of this nature simply has to take a breather from time to time. Hard to believe the 80% 5 star reviews. I had to slip in a Seinfeld to get some real humor and try to settle the aggravation of this movie.

billReviewed in the United States on October 2, 2020
5.0 out of 5 stars
If you love great lines you'll enjoy this romp in New York ciy.
Verified purchase
What can I say, a true hilarious Jack Lemmon at his comedic best. Sandy Dennis was a perfect match as his wife. Their timing is impeccable. A true classic. We lost all our dvd on a move. So we decided to only replace our thru favorites. Among some of them. Some like it hot, the heiress, sunset boulevard, toosie, maverick, cousin Bette, I remember mama, mrs miniver, the grass is greener, the actress, how green was my valley and life with father to name a few. You wont regret adding this to your dvd library.
5 people found this helpful

C. C. BlackReviewed in the United States on February 21, 2021
3.0 out of 5 stars
"Oh, My God"
Verified purchase
"The Out-of-Towners" could be subtitled, "The Business Meeting to Hell." As you have figured out from other reviews, this is the story of Gwen and George Kellerman, who spend ninety minutes of screen time, seventeen hours of narrative time, trying to get George from their comfortable suburban home in Ohio to an important interview in Manhattan. Every five to ten minutes, Neil Simon, the storyteller as capriciously vengeful god, springs a new obstacle in the Kellermans' path. The hindrances range from predictable to humorous to frightening to stupid to ridiculous. Simon must have enjoyed a week dreaming up one sadistic pitfall after another. Good grief: the beleaguered couple are even kicked out of a church before they can pray for help.

The movie is one damnable thing after another, and that's much of its problem. It begins with commonplace aggravations with which anyone can identify but quickly descends into a madness so dark that it almost forgets it's a comedy. The pacing is off as well. For this kind of yarn to work, it needs to build incrementally from small chuckles to medium laughs to gut-busting hilarity. Instead, apart from a nice twist at the end, the climax is unexpectedly gooey.

While the supporting cast offers happy surprises—Anne Meara, Ann Prentiss, Ron Carey, Johnny Brown, and Billy Dee Williams—the picture is carried by its stars. Sandy Dennis does well as the mousy yet sensible, long-suffering yet dignified wife. Jack Lemmon begins the movie at a pitch of frenzy so high that he has nowhere to go but down. While he stretches his maniacal outrage across the first two acts, by Act III his character is a punctured balloon: filthy, grizzled, robbed, mugged, chased, bat-beaten, nearly deaf, with a cracked front tooth. But I'll hand the actor this: he had the guts to hold his mark as the camera rolled while a flying manhole cover nearly killed him.

Lots of folks love this picture, and you may, too. Unless seat-belted for full-on slapstick, I prefer comedies that don't push me so hard to laugh. By the end of this one, I was relieved for all parties that it was over.
One person found this helpful

Arthur ThomassonReviewed in the United States on September 19, 2017
5.0 out of 5 stars
I give it 10 stars
Verified purchase
What a delightfully funny and entertaining Movie. I am 80 years old and this film will always be on my heart as one of the best films I have ever seen.
This movie captures your every moment and leaves you laughing so hard that i would not view it in public. Just the mention of this movie brings a smile to my face that brightens my day. The writing of and the acting in this film is so good that I feel a five star rating is not enough. There fore I give it a ten.
25 people found this helpful

wolverinaReviewed in the United States on February 22, 2021
1.0 out of 5 stars
Stressful - NY is disgusting
Verified purchase
This movie is stress inducing. Not even really funny. It is everything that keeps me from ever visiting NY even though this movie is 50 years old. The amount of literal garbage and the filthiness of the city , not the sett dressing, the actual garbage was disgusting. I couldn't even enjoy the acting due to the filth of the setting.
5 people found this helpful
See all reviews
Back to top
Get to Know Us
Make Money with Us
Amazon Payment Products
Let Us Help You
EnglishChoose a language for shopping. United StatesChoose a country/region for shopping.
© 1996-2022, Amazon.com, Inc. or its affiliates