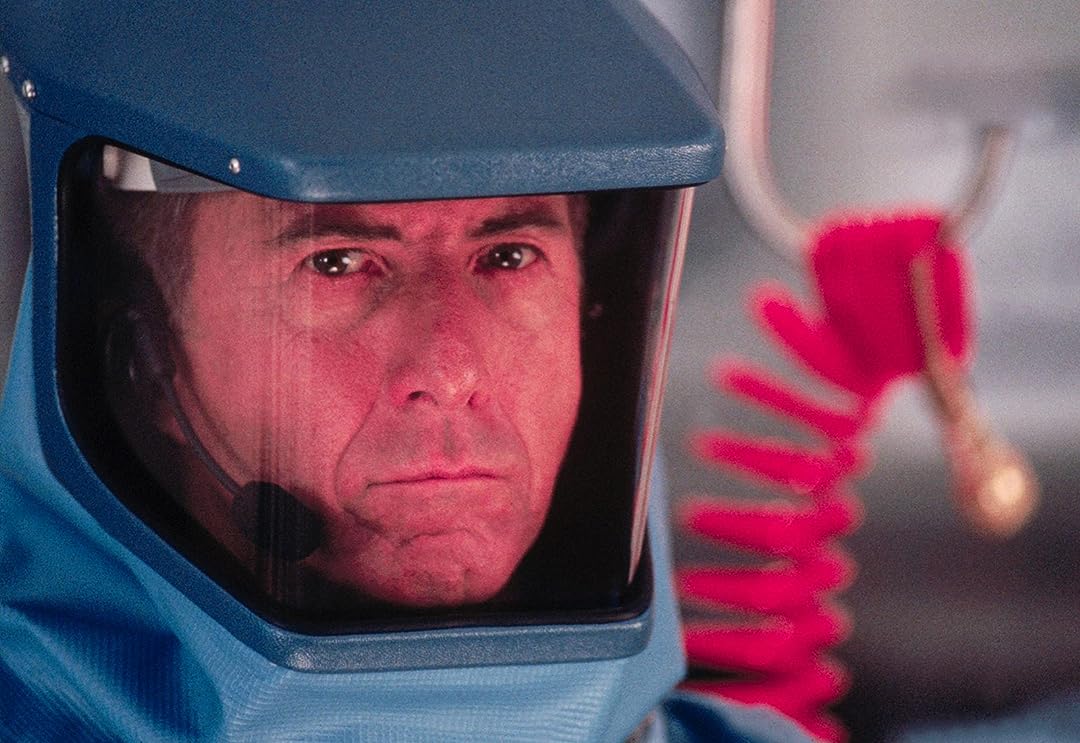 A. K. MasonReviewed in the United States on March 1, 2020
1.0 out of 5 stars
Hasn’t aged well
Verified purchase
Watched February 2020 with our microbiology / laboratory expert daughter.

I hate saying this because I love the cast, but ... It’s laughably bad. The characters bounce off each other with an unnatural level of emotional engagement that beggars belief. They tend to be very wooden and rigid in their portrayals. And for an example, Dustin Hoffman’s character is a US Army Colonel that wouldn’t have lasted 15 minutes in a military role, even a medical one. The characters routinely make unbelievably dumb, obvious mistakes like waltzing in and out of contaminated areas, reaching into moving machinery, and not following basic safety in medical procedures. Lame.

Reader CGReviewed in the United States on April 6, 2019
3.0 out of 5 stars
Not as advertised
Verified purchase
I was very disappointed that the dvd inside the case was not as advertised The jacket clearly offers Subtitles for the hearing impaired and other special features. I was purchasing the dvd, with subtitles for the hearing impaired, because my husband is nearly deaf. I reviewed the on-line pictured dvd box prior to purchase so I was surprised the special features were not available on the disc.
13 people found this helpful
Report abuse

DeadManWalkingReviewed in the United States on September 3, 2017
4.0 out of 5 stars
Very good thriller
Verified purchase
Obviously lots of movies have been made about viruses, but this would definitely be one of the better ones. Chock full of A-list actors (that doesn't always mean anything, but they are all great here), this will keep you on the edge of your seat the whole time. It's scary in the sense that you know an outbreak like this could very easily happen. I don't have much to say about this as other reviewers have covered it well. I would just recommend this to everyone who likes a good thriller with great acting, good action and suspense. Guide=some foul language(not too much), no nudity, and really no gore(some gross images of the sick)
18 people found this helpful
Report abuse

joel wingReviewed in the United States on July 13, 2020
1.0 out of 5 stars
Starts off good but horrible writing just leads to one bad scene after another
Verified purchase
There is an unknown virus outbreak in Zaire. An infected monkey from the area is brought to the United States where it starts spreading the sickness. A U.S. army team commanded by Colonel Daniels (Dustin Hoffman) and including Lieutenant Colonel Schuler (Kevin Spacey) and Major Salt (Cuba Gooding Jr.) are tasked with finding a cure. There’s also Daniels’ ex-wife Dr Robby Keough (Rene Russo) who works for the Center of Disease Control. In the background General McClintock (Donald Sutherland) and Daniels’ boss General Ford (Morgan Freeman) are trying to cover up the virus because he and General Ford encountered it before in the 1960s and had to take extreme measures to try to eliminate it.

The movie has a good start. For it shows how the virus spreads from the monkey to a human and then from human to human. The later can happen from coughs, via ventilation systems, etc.

Then there are all the inconsistencies in the story. For instance, General Ford walks into a refrigerator vault with a bunch of disease samples in his regular clothes with no protection. Likewise Daniels walks out of his lab with no protective suit on in an infected town, gets in a HUMVEE and drives out of the area even though the virus can be spread through the air.

Then there’s the downright unbelievable. When a town gets infected the U.S. army cordons it off. This of course causes resentment, people try to escape, and a helicopter gunship shoots up a truck and kills everyone inside. This was a poor attempt to create tension because it basically has the army making everything worse. Then they start taking out the people who are feeling sick, but because the virus is airborne that means everyone in their family should be taken away as well, but they’re not. Finally, Lt. Col. Schuler rips his suit while in the lab and then covers it up even though he might be infected and then talks to other people and might be infecting them. This is what an expert on infectious diseases does, just spread a sickness around to his friends and colleagues.

Basically, what starts off as a good idea gets ruined by some really bad writing.
C

paradiseReviewed in the United States on March 25, 2020
1.0 out of 5 stars
What hapened to these famous actors?
Verified purchase
SUCH A DISAPPOINTMENT! Morgan Freeman, Kevin Spacey, Dustin Hoffman, Cuba Gooding, Donald Sutherland....you'd think we'd see great performances. NOT! They were not believable...not one of them. And the military presence- the helicopters- OVERKILL. If you are looking for a well-acted, well-written story, this is NOT going to satisfy you.
6 people found this helpful
Report abuse

DON BAILEYReviewed in the United States on April 12, 2017
5.0 out of 5 stars
"OUTBREAK" WELL WORTH THE TIME---AGAIN and AGAIN!!!
Verified purchase
[[ASIN:B002SPU9FQ Outbreak]] I think that this is one of the best movies of our time! Dustin Hoffman and Morgan Freeman, not to mention, Rene Russo, , Kevin Spacey, Donald Sutherland, and Cuba Gooding Jr. are all top notch actors. It's not often that we see so many top of the line actors working together like this. I have seen this movie a number of times. And will probably see it many more times. If you have not seen it, do take the time to.
19 people found this helpful
Report abuse

Blue DragonflyReviewed in the United States on August 31, 2014
5.0 out of 5 stars
One of the best movies of all time!
Verified purchase
I love Dustin Hoffman and this is one of his best movies, in my opinion. Great cast, great acting and tense story that keeps you on the edge of your seat.These days you rarely see such a line-up of great actors all in one movie. Imagine, Dustin Hoffman, Rene Russo, Morgan Freeman, Kevin Spacey, Donald Sutherland and Cuba Gooding Jr. all playing off of one another! Plus one of the best thriller directors in Hollywood. The story is very current, even though this is an older movie. A sudden outbreak of a 100% lethal virus has happened in a small Northern California town and doctors from USAMRID and the Center for Disease Control rush in to quarantine the town and find the carrier in order to create a cure. However, there is a more sinister player hidden in the shadows who doesn't want them to find the origin of the disease and is willing to go to any lengths to prevent it. Non-stop action and thrills. The movie was filmed in the small town of Ferndale and the scenery is spectacular. I watch this movie again and again and never get tired of it.
20 people found this helpful
Report abuse

Alfred J. ParksReviewed in the United States on May 27, 2020
5.0 out of 5 stars
It was just as great as when I first saw it.
Verified purchase
This movie is a must see, especially for those living it. In many ways this movie was portrayed as a fictional epidemic similar in many ways to the COVID-19 Pandemic of today with the only exception that the portrayed virus was created as a biological warfare sample. The similarities are with animal to human transmission and the use of antibody serums to cure the virus. The conspiracy theory that the Corona Virus was created by the US Army may have been inspired by this work of fiction.
One person found this helpful
Report abuse
See all reviews
Back to top
Get to Know Us
Make Money with Us
Amazon Payment Products
Let Us Help You
EnglishChoose a language for shopping. United StatesChoose a country/region for shopping.
© 1996-2021, Amazon.com, Inc. or its affiliates