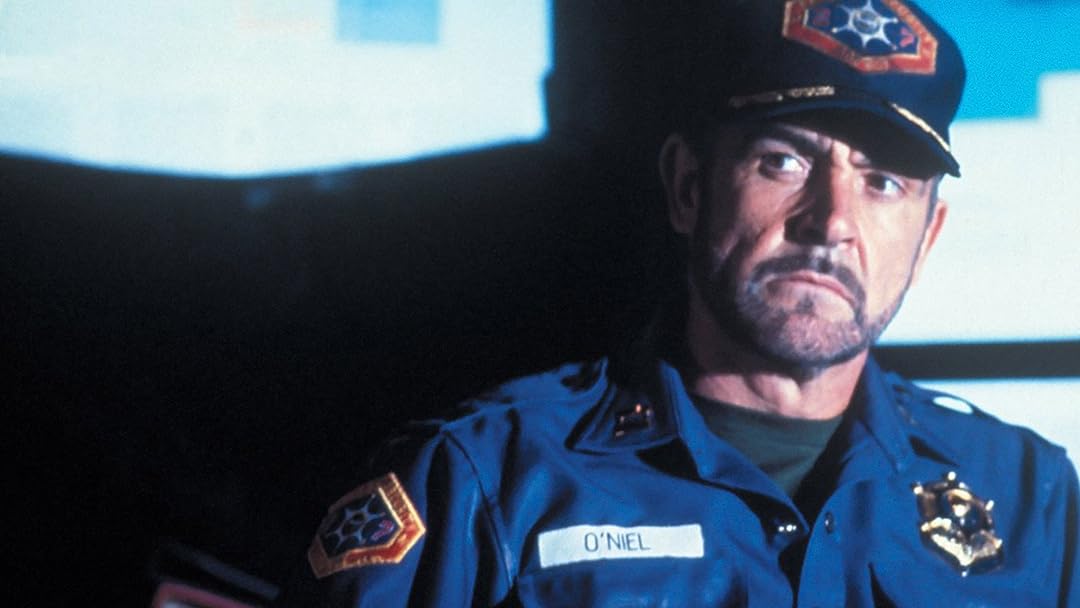 Mark C. JonesReviewed in the United States on July 15, 2018
5.0 out of 5 stars
Blu-ray Is A Vast Improvement Over Previous DVD Version
Verified purchase
I bought this Blu-ray version because I owned the DVD version which was lousy, lousy, lousy. The Blu-ray is so much better that it looks like the movie was shot in the past 5 years rather than in the early 80's. Colors really pop and the detail is extraordinary. The scale models of the mining structures on Io are fabulous. Director Peter Hyams and his special effects crew had no idea people would be watching these scenes decades later on widescreen LCD's and digital playback equipment. They don't look realistic, but they have the detail and beauty of works of art.

Speaking of art, composer Jerry Goldsmith provided one of his typically excellent scores full of rousing excitement and relentless menace. It sounds great--vivid and propulsive with the brass and percussion-heavy orchestral textures coming through clear.

And of course, there's at least one great-I mean really great, classic-chase scene. Sean Connery chases a drug pusher through a variety of residential and sleeping quarters which culminates in a fist and knife fight in an employee cafeteria. The sleeping and residential area is an enormous structure composed of individual but interlocked small cages--and it's always crowded with walking, sleeping, and showering mine workers. The camera work is phenomenal following this cat-and-mouse chase with smooth and fluid shots--the editing during this chase scene courtesy of Stuart Baird--contributes to the high energy of this whole scene.

Add to that excellent acting from Connery, Frances Sternhagen, and Peter Boyle.

The only drawback are the attempts to reinvent High Noon. Shotguns are a bad idea inside of space stations, especially inside of greenhouses. The final fight outside of the station is anticlimactic after the abovementioned foot chase.

Overall, though, this movie really kicks it on every possible level. And let me emphasize there's no comparison between this Blu-ray and the previous Warner Brothers DVD.

DavidReviewed in the United States on November 17, 2018
4.0 out of 5 stars
Yes, it's High Noon in Space
Verified purchase
So what?
So what if the 1980s concept of Io is wrong?
So what if people don't explode like gore-filled balloons in zero-pressure atmosphere?
So what if some of the villains are paper thin?

It's still a fun little movie. Decent special effects which hold up even today (especially the model vs. live-action compositing). Atmospheric without drowning us in it. The sets are gorgeously detailed--and as the director mentions a LOT in his commentary, could so easily have been replaced with CGI today. But, as he also mentions, it's the lighting that really sets the mood. This movie isn't dark. It isn't bright. It's BOTH, and often at the same time. Hyams loves shadows, loves contrast, and Sean Connery's face is just made for it.

And Jerry Goldsmith's score doesn't disappoint, either. Even if you can hear strains of Wrath of Khan and Wolfen in there.
23 people found this helpful

Daniel J. TurkReviewed in the United States on September 14, 2020
5.0 out of 5 stars
Space-grunge on par with Alien
Verified purchase
Yes, the surface of Io is so irradiated by Jupiter you'd be dead, spacesuit or no, in a matter of minutes unless you locked yourself inside of a lead vault thicker than a Chubb safe, AND the whole "explosive decompression" thing is mostly BS (deadly relevant to going suddenly from several atmospheres to just one underwater, not so much from one to zero in space). Oh well, it's"High Noon in space", not a Neil deGrasse Tyson documentary. And as said, it's up there with the original "Alien" as one of the great "Blue Collar space movies." Connery does what he does best, and kudos to casting Frances Sternhagen instead of some jiggly airhead one-third his age, and brave move casting ultra-manly James Sikking as a mere sidekick. Peter Boyle was a national treasure. A childhood classic that holds up well.
8 people found this helpful

Virginia DadReviewed in the United States on December 4, 2019
4.0 out of 5 stars
A fun and mostly forgotten movie
Verified purchase
I watched this again the other day and found it enjoyable. It's got the aesthetic appeal of the first Alien movie, where things are futuristic but look "lived-in." The plot is easy to follow and, as I recall, is very similar to the famous Western, "High Noon." All in all, it made for a fun viewing. Sean Connery is the marshall for a space mining colony - think "company town" - and has to deal with a string of concealed workplace fatalities, corrupt company executives, and a troubled marriage. He keeps it believable and the film has a nice gritty, believable feel to it. I liked it.
8 people found this helpful

joel wingReviewed in the United States on December 28, 2020
3.0 out of 5 stars
Space Western with Sean Connery facing down the Man & outlaws
Verified purchase
On its surface Outland would seem to be a sci-fi flick. That’s because it takes place in a mining colony on one of Jupiter’s moons. However it is really a crime drama with Sean Connery as Marshall William O’Niel. O’Niel begins an investigating into a series of miners that seemingly kill themselves. It leads him into a confrontation with the people that run the place.

The other twist to the film is that it is really a space western. Connery as a Marshall in a mining town far away from everything is just like a Western with the Marshall in a frontier settlement all by himself facing up against insurmountable odds. It even ends in a big gun fight against outlaws. The adaptation works with the biggest draw being the buildup to O’Niel’s shootout and whether he’ll survive it.
C
3 people found this helpful

A. Nony MouseReviewed in the United States on December 15, 2020
2.0 out of 5 stars
The price was good, but not good enough for the lack of image quality
Verified purchase
The disc manufacturer flubbed the encoding to the point where both Standard and Widescreen versions were incredibly grainy to the point it was difficult to read the on-screen credits either before or after the movie.
They both start out with the "inset" widescreen leading titles so you can almost read everything (with a dark band all around top, bottom, left and right sides, but even as the Standard version shifts to full screen (1.33), the Widescreen version maintains black boarders around the movie and never really achieves Widescreen status.
A computer viewer can sometimes change the "crop" settings on the viewing app to make it fill a Widescreen computer display, but that just makes it fuzzier!
With both horizontal a vertical video artifacts, it almost looks like a poor VHS dub was used as the source material - which is not the reason I purchased this.
I don't blame Warner Home Video, but the problem probably lies with Aladd Company, who is listed on the DVD case as being the company who "released" this version.
Sadly, this release is in the category of "try to watch it once and then give it away."
One person found this helpful

Todd ClanReviewed in the United States on January 17, 2021
5.0 out of 5 stars
High Noon in Space
Verified purchase
My wife's judgment, despite being a big Sean Connery fan, was that this film was "interesting." Personally, despite its dated special effects, I think it's a classic. Basically a sci-fi remake of High Noon, Outland finds a US Marshall (Connery) on a mining facility at the mercy of a corrupt corporation.

Connery must deal not only with the disaffection of his wife, but with drug dealers, the rig's corrupt boss, and a team of hired killers. It's good stuff, and the tension is heightened by a timer, showing the audience when the shuttle bearing the bag guys will arrive. Connery is racing against the clock to prepare, and nobody wants to put themselves in the line of fire - save a crotchety old "country" doctor.

If you're a Sean Connery fan and want to see one of his less well-known films, love sci-fi or just want an 80s film that wasn't made by John Hughes, Outland is for you. Five stars.
3 people found this helpful

Bill WeaverReviewed in the United States on December 27, 2021
3.0 out of 5 stars
Exploding heads is clearly what the people wanted in the 80s
Verified purchase
This movie is all about the sci-fi gross out of death by spacesuit malfunction, airlock misuse, or otherwise known as the joy of explosive decompression. In line with my current 80s nostalgia kick, and alongside David Cronenberg’s low-fi film Scanners, the real reason we wanted to see this movie as kids was naturally the guy’s head exploding. Also like Scanners the exploding head is a bit of an anticlimax once you see it, but still the idea of a psychedelic freak out in space holds some charm. Insanity is an old favorite in the sci-fi department. It happened every other episode on the original Star Trek. I recall Ren & Stimpy called it “space madness”. To continue with my series of references from Stanley Kubrick’s The Shining, the old timers used to call it “cabin fever”. There is something rotten in the mining station of Outland. The nightclubs are new wave and the computers are green screens. Sean Connery plays the only honest cop left in the solar system, and he’s out to bust the crooked station manager with his trusty scatter gun at the ready. There’s not much more to this movie and I won’t spoil what little there is. The novelization by Alan Dean Foster I recall was also fun.
See all reviews
Back to top
Get to Know Us
Make Money with Us
Amazon Payment Products
Let Us Help You
EnglishChoose a language for shopping. United StatesChoose a country/region for shopping.
© 1996-2022, Amazon.com, Inc. or its affiliates