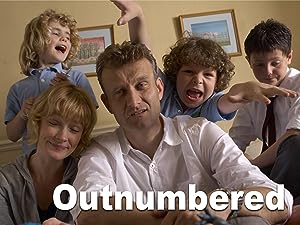 (8)2007X-Ray13+
Comedy about the daily rollercoaster of life with small children.

Michael L. KazarReviewed in the United States on June 15, 2020
5.0 out of 5 stars
Greatest British Comedy
I can't believe this finally showed up on an American streaming service. This is unquestionably one of the top 2 or 3 British comedies, ever!

The title comes from the idea that once you have your third kid, you're outnumbered. It follows the life of the family as their kids grow up. But that summary doesn't do it justice -- the comic performances are a bit understated for a Britcom, but wonderful.

BuddyReviewed in the United States on June 21, 2021
2.0 out of 5 stars
Insulting to teachers and good parents. Not funny, boring, frustrating
The idea of two parents with three poorly behaved children is not enough to make a funny show. That the father is supposed to be a trained teacher of young children, and he seems overwhelmed, having zero behavior modification skills, is absurd. This seems written by someone who hasn't a clue what he jobs of teaching and parenting are! The adults seem powerless in almost every aspect of their lives, hanging on as cheerfully as they can from day to day; that isn't the stuff of comedy.

The mom and Dad seem to constantly surrender any effort at socializing their kids, which is supposed to be funny? They act totally helpless, or else just do not care enough to seek attempts to teach their children to be kind, respectful, responsible, etc. None of the characters are likeable, especially not the children. Dealing with life's challenges for this show seems to makes it heroic to stay calm and some how it's supposed to be amusing that they just barely manage to keep their tempers under control.

There are no clever solutions, the mom and dad merely endure from one problem to the next, apathetic about what appalling adults their children will grow to be. The dialogue isn't clever. The children are sort of cute to look at, for a while, then, they're just annoying as the characters are made to say and do so many dumb things.

There could have been so much more to this, but it is yet another example of a story that could have been good, had the dialogue and story lines been done by better writers. It isn't worth it after a while, it's annoying and extremely repetitive. I don't want to know about real people who behave this way and tit isn't creative fiction. I did give it only one star, because it isn't violent or despicable, but it sure isn't good.
Report abuse

tellinthetruthReviewed in the United States on June 6, 2020
5.0 out of 5 stars
Way to go Amazon Prime!
If you love:
British- slow moving-character rich- perfectly cast-glimpse into daily living, this comedy is for you!
I love this show! It’s finally here!
Enjoy!
5 people found this helpful
Report abuse

Yanli SunReviewed in the United States on September 20, 2020
5.0 out of 5 stars
classic comedy series
always love shows like this, it's heartwarming and touching.
2 people found this helpful
Report abuse

Tina MarshallReviewed in the United States on December 14, 2020
5.0 out of 5 stars
Exceptional British Comedy With Genius IQ Children
One of my favorite British comedies..having had two exceptional children myself I home-schooled as even public specialty magnet school failed in it's duty to keep engaged... I can totally relate and feel lucky I didn't have a third...
One person found this helpful
Report abuse

SFStephReviewed in the United States on June 28, 2021
5.0 out of 5 stars
Hilarious partially improved comedy
This show is brilliant and has our entire family doubled over in laughter. The scenes use improvisation, which highlights the extraordinary skill and spirited personalities of the young actors. I can see why this was a hit in the UK, and I'm sorry that we had to jump through hoops to get it in the States.
Report abuse

K MACEYReviewed in the United States on January 25, 2021
2.0 out of 5 stars
Nah
Adorable actors. Ridiculous script. Makes you wonder who is in charge: the parents or the children. Self-discipline? Never heard of it here.
Report abuse

Golf nutReviewed in the United States on June 21, 2021
1.0 out of 5 stars
Pompous, in the extreme. Lazy poor writing.
Terrible, ghastly family with nothing to laugh about here. Nothing Hill types being so full of themselves, yuk!!
Report abuse
See all reviews
Back to top
Get to Know Us
Make Money with Us
Amazon Payment Products
Let Us Help You
EnglishChoose a language for shopping. United StatesChoose a country/region for shopping.
© 1996-2021, Amazon.com, Inc. or its affiliates