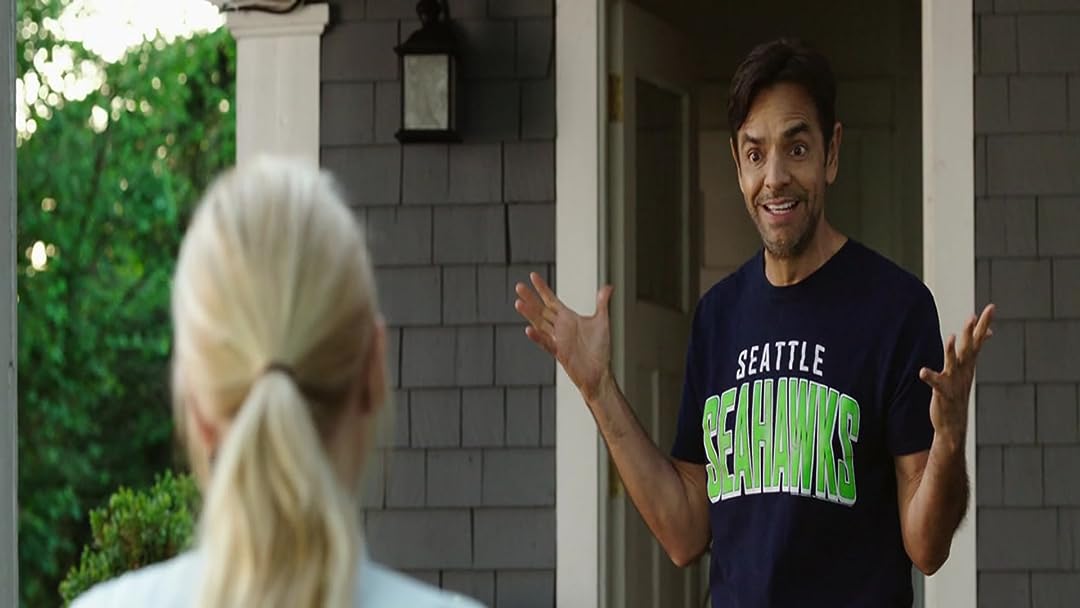 (8,211)
6.01 h 52 min2018X-RayPG-13
A spoiled, wealthy yacht owner is thrown overboard and becomes the target of revenge from his mistreated employee.

Kindle CustomerhReviewed in the United States on September 13, 2018
2.0 out of 5 stars
nothing like the original, not worth your time
Verified purchase
I was excited to hear a sequel to Overboard was coming out, but this movie is such a flop.
-a main plot point in this movie is the spotlight on the male character''s Mexican heritage. It's unnecessary and so forced that I was imagining the meeting where studio execs got the idea to try for cross-over appeal to increase the movie's market share. Instead they ruined the movie for both markets. (I'm normally a fan of Eugenio Derbez' comedy, but he really disappoints here)
-Anna Faris has none of Goldie's sparkle. It seems as if she's being over-directed and the result is painful and weirdly sleepy
-You can feel how afraid the producers are of being labeled sexist, like the original movie sometimes was, so this entire remake comes off as defensive. They definitely take no chances. I understand that the original movie isn't in line with today's PC standards, but that made its empowering moments stand out- like Goldie's brilliant b&tchin3ss when she decides to defend the little boy. This movie has none of that and it comes off as a long, boring apology.

Mercedes McveyReviewed in the United States on August 27, 2018
4.0 out of 5 stars
Certainly worth the watch for a light evening. Made us laugh.
Verified purchase
This was a very fun movie to watch. My husband and I laughed so hard. This honestly should get five stars just for being a comedy that had the creativity to not be "raunchy." I find that so relaxing. I'm no prude, but a lot of the comedies these days rely too much on the shock value of profanity, sex and body function jokes. I'm so bored with that. Of course, maybe cliche, but this is a remake, I could never say it was as good as the original, which honestly, made me laugh even harder. But, then it surprized me in the sense, it' kind of stood on it's on, like a completely different story and take on the original. Certainly worth the watch for a light evening. They pulled it off.
157 people found this helpful

JRReviewed in the United States on August 6, 2018
1.0 out of 5 stars
"Overboard" should be thrown overboard!
Verified purchase
This was an awful remake. The characters were flat and there was no chemistry. Very disappointed.
151 people found this helpful

S. J. CooperReviewed in the United States on August 21, 2018
5.0 out of 5 stars
Hilarious!
Verified purchase
This movie is not a great masterpiece, or Oscar worthy, and probably won't ever be called a classic. But the one thing it is, is HILARIOUS!!! I saw it twice in the movie theater and knew I had to own it. I laughed so hard! I'd never seen the lead actor before so I was kinda wary of him, but his comedic timing is on point! He was funnier than Anna Faris, and she's a great comic. If you enjoyed the original, I think you'll enjoy this remake. If you like laughing at silly antics, then you'll enjoy this movie. If you enjoy rom coms, then you'll enjoy this movie!
116 people found this helpful

Sunshine77Reviewed in the United States on August 27, 2018
1.0 out of 5 stars
Movie was great, but The prime version blocks Spanish translation, so ur lost most of the movie
Verified purchase
The digital copy has black line on bottom and top of screen that blocks out part of the movie. A major disappointment that I couldn’t read translations on half the movie is in Spanish. Closed caption just says speaking Spanish, but u can tell there are words in movie itself trying to show u translation. It sucked not being able to read them or find solution
63 people found this helpful

Dr. in ChicagoReviewed in the United States on July 27, 2018
4.0 out of 5 stars
Pleasant Reboot
Verified purchase
If you're a fan of the first movie with Goldie Hawn and Kurt Russell, you might enjoy the gender switch of this film. The performances of the stars are good, and the script is well written. The end is the pivotal part that doesn't seem to hold up. There are moments throughout that the formula is trying too hard, and I still enjoyed the movie.
74 people found this helpful

JimboReviewed in the United States on May 14, 2018
4.0 out of 5 stars
Overboard 2018: Thumbs Up!
Well, I saw both movies and have to say the second overboard was just as entertaining as the first-contrary to the negative reviews. What made it humorous was the inclusion of a Spanish twist throughout the movie. Most of the humor was not as funny in English as how it was received in Spanish. The big difference was the plot reversal with Engenio Derbez playing the role of Goldie Hawn and the kids were girls not boys. I liked it.
167 people found this helpful

Raisuli the MagnificentReviewed in the United States on April 29, 2019
1.0 out of 5 stars
hard to get through
Verified purchase
This film is aimed at the unmarried mother to encourage her to cross social boundaries and consider a husband outside her social group. Not a bad message, but this film feels more contrived and manufactured through marketing data and social psychology than any real attempt to tell a story.

Note how the poor family lives in a fairly clean house that maybe has a dirt driveway, but is otherwise situated in a clean neighborhood, and for big hole in the roof the house itself is clean and the lawn is well manicured. And the interior of the home is a far cry from the ultra messy dilapidated house of the Kurt Russel land Goldie Hawn vehicle some decades earlier.

In short, this film is a piece of trash because it tries to rework a likeable film from the 80s to suit a social agenda. It doesn't matter what race the characters are, but this film really tries to drive that point home in a girlish likeable way without addressing the social differences and fears. That's why the Hawn=Russel film was and is superior. You had a white trash carpenter who was down on his luck trying to do good for his kids, but doing it in a fatherly way with no home-economic skills--and his three sons were bratty.

With this film the house is immaculately clean, well painted, a few dings here and there, but otherwise immaculate, and the daughters are perfectly behaved. The single mother who is joggling two jobs to strive for a career in nursing, quite frankly, doesn't need a mega-wealthy south of the border son of an industrial magnate, even for revenge.

That, and the gags aren't funny in the least. The lead actor isn't all that attractive, and typically industrial magnates, the super wealthy ones, got their start by working on site and getting their hands dirty. Their kids typically have done the same. Bratty rich snotty offspring exist, but they typically come from bad parenting, not because they're wealthy for the sake of it.

My postulation about the original movie is that some wealthy male killed his wife by pushing her overboard before the days of digital security cameras, and may have gotten away with murder. The original Overboard took that story and turned it on its head to tell a story that had a happy ending, as is Hollywood's forte. This film doesn't even do that, it merely takes the first film and does a gender swap role-reversal kind of thing, and tries to put a girlish bow on it. The result is this mess.

I don't know why Hollywood remakes good films thinking they can improve on them, and then hires a bunch of marketing lackeys to post fake reviews to try and recoup the dollars they spent on a piece of trash film.

Maybe, just maybe, if you let a writer do his job without your marketer's input, you might have come up with a better film.

As it stands now this thing is junk.
22 people found this helpful
See all reviews
Back to top
Get to Know Us
Make Money with Us
Amazon Payment Products
Let Us Help You
EnglishChoose a language for shopping. United StatesChoose a country/region for shopping.
© 1996-2022, Amazon.com, Inc. or its affiliates