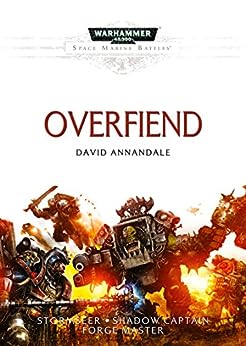 For many long years, the ork warlord known as the Overfiend of Octarius has bedevilled the Imperium, ruling his alien empire in the heart of the Emperor's realm. Now, at last, three Chapters of Space Marines come together to destroy the greenskin menace and restore Imperial rule. The Salamanders, White Scars and Raven Guard, together with their allies from the Astra Militarum and bolstered by the aid of the mercurial alien eldar, fall upon the worlds of Octarius system with chainsword and bolter, bringing death to the orks.

Read it because
Three interconnected stories show off the way the Raven Guard, White Scars and Salamanders fight. Find out what's more effective against the orks: Sneaky ninja tactics, speed and fury or fire. Lots of fire.

David Annandale is the author of the Warhammer Horror novel The House of Night and Chain and the novella The Faith and the Flesh, which features in the portmanteau The Wicked and the Damned. His work for the Horus Heresy range includes the novels Ruinstorm and The Damnation of Pythos, and the Primarchs novels Roboute Guilliman: Lord of Ultramar and Vulkan: Lord of Drakes. For Warhammer 40,000 he has written Warlord: Fury of the God-Machine, the Yarrick series, and several stories involving the Grey Knights, as well as titles for The Beast Arises and the Space Marine Battles series. For Warhammer Age of Sigmar he has written Neferata: Mortarch of Blood and Neferata: The Dominion of Bones. David lectures at a Canadian university, on subjects ranging from English literature to horror films and video games. --This text refers to an out of print or unavailable edition of this title.

Rhymoceros
4.0 out of 5 stars 3 Legions for the price of 1
Reviewed in the United States on March 27, 2016
Verified Purchase
It wasn't too bad of a book, 3 stories strung together, but it's more or less the same character of each legion you would find from each chapter, stereotypical, Raven Guard sneak and provide ambush attacks, Salamanders are humble, helpful, very well mannered, say thank you at the end of every sentence and the White Scars are in it for the speed. I think the orcs could have been developed more, I really liked the concept of a few of them, including the shaman and engineer. Some of the in legion conflicts weren't too bad either. Hhhmmmnn, the locomotive was awesome...okay, I'll change it from 3 to 4 stars.
Read more
4 people found this helpful
Helpful
Report abuse

JPS
4.0 out of 5 stars Quite good
Reviewed in the United States on October 18, 2015
This is a collection of three stories, each featuring a company of a different Space Marines First Foundation Chapter. They act in concert to draw in and destroy a powerful Ork warlord known as the Overfiend, and who has taken control of the Octarius system and a number of others. By order of appearance, the three Chapters are the White Scars, the Raven Guard and the Salamanders.

Each story focuses on a key Space Marine character who is the epitome of his Chapter. For the White Scars, it is a Psyker. For the Raven Guard, it is the Shadow Captain, which is the title of the story and a rather clear hint to his abilities - and for the Salamanders, it is the Company’s Techmarine, hence the story’s title (Forge Master).

A particular nice touch is the appearance of Eldars, “allied” to the Space Marines because they share a common goal in destroying the Ork threat. This threat happens to be much greater than the Space Marines happen to know and, of course, the Eldars are not even likely to tell them the whole truth. The level of distrust between the very circumstantial allies is at its highest, leaving them just about capable of coordinating their struggle against the Ork forces, but no more than that.

An additional and interesting feature is the way in which the author has, with his three stories, combined several types of warfare including space battles, ambushes and assaults on Ork bases. Also valuable are the comparisons that these three stories allow for between the fighting techniques of the ultra-strong and brutish Orks, the lethal, elegant and skilful Eldars, and the Space Marines.

I will mention no more than that, to avoid spoilers, although I will add that I was quite pleased by these stories, and even somewhat agreeably surprised. Four strong stars.

Amazon Customer
1.0 out of 5 stars Terrible.
Reviewed in the United States on December 22, 2020
Not only in this book boring, but the protagonists have such terrible morals and such flat personalities that I ended up rooting for the Orks out sheer spite.
Read more
Helpful
Report abuse
See all reviews

Mr Analyitical
3.0 out of 5 stars It's very nice to see a campaign from such a visceral front ...
Reviewed in the United Kingdom on December 13, 2015
Verified Purchase
Three separate short stories covering three different chapters executing three different missions in the same campaign.

Individually each book is well written as is typical of most Black Library writers and you can see the threads of each story running through the others. It's very nice to see a campaign from such a visceral front line level and observe the more far reaching effects not only on the Imperium of Man but also on the other races and their own ideaologies and politics.

3 star okay rating because it's not an Eisenhorn but it's certainly much better than a C.S. Goto book.

RegularAmazonUser
4.0 out of 5 stars Quality read.
Reviewed in the United Kingdom on January 1, 2016
Verified Purchase
The genius of this book is the skill of the author in successfully portraying the mindset and internal policks of three very differing chapters within the imperium. The strategies they adopt are almost irrelevant in comparison to the lack of full military power and personality clashes they suffer from. Brotherhood and trust, both the byword and anathema to the imperium is in play throughout and the author expresses this, in my opinion, skillfully. I am biased as I love a WH40K space battle, and the undoubted sacrificice each arrogant belligerent marine must ultimately make.Well written and well thought out. Intelligence over fury.
Read more
Report abuse