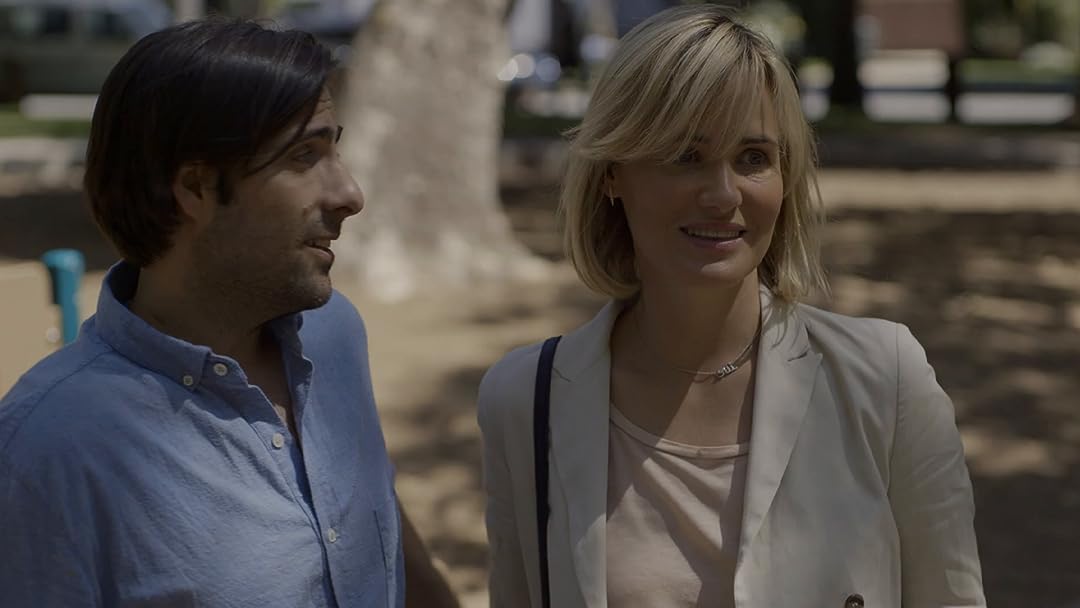 (286)
1 h 18 min2015X-Ray18+
Alex (Adam Scott), Emily (Taylor Schilling) and their son RJ are new to LA. A chance meeting, introduces them to the mysterious Kurt (Jason Schwartzman), Charlotte and Max. A family "playdate" becomes increasingly interesting as the night goes on.

SBC97223Reviewed in the United States on May 2, 2020
1.0 out of 5 stars
Mostly A Tease, Promises Lots, Delivers Nothing.
Verified purchase
Basically this is a waste of time as I personally have heard all to many penis jokes no matter how
sophisticated the teller tries to make the build up. There is a complete movie here, but in the end it
is quite juvenile despite pretending to be mature and adult. One star for telling a whole story with
a moral about dancing with the one who brought you in the end. That caps it as the rest is stale.
So for a movie about sexuality in relationships, The Overnight talks a lot, builds up some potential,
and then fails to deliver. I kept watching that the next corner would let is step into something
rewarding for having to put up with really awkward penis jokes just like in junior high school. Sadly,
The Overnight does not deliver and brings me back to the old adage that those who talk or brag the
most, especially about sex, are probably getting the least. This movie talked a lot, but just did not
get to be a good movie in spite of a happy ending. A just slightly below average film showing tons
of immaturity--until the end.

MeganReviewed in the United States on March 18, 2020
5.0 out of 5 stars
Great Movie!
Verified purchase
Great movie that had a unique storyline and excellent direction and acting...particularly when you are bit tipsy and trying to sort out this surreal Coronavirus reality...
2 people found this helpful

SeattleReviewed in the United States on December 7, 2021
5.0 out of 5 stars
Sexy romp, witty, not for kids.
Verified purchase
This takes place pretty much all in one long evening, and it reminded me of who’s afraid of Virginia Woolf in the intensity of two couples gradually peeling the layers of the onion back to reveal who they really are, and in this case they end up good friends. There is a bit of sex, nudity and concepts and language that would not make sense to young viewers or conservative adults.

Ode MinervaReviewed in the United States on April 24, 2021
4.0 out of 5 stars
We Are More Than What We Label Ourselves
Verified purchase
Very good acting and the premise of the story was promising. We hope to know ourselves by applying this or that label that keeps us in discrete boxes which most of us stay most of our lives. This movie has the moxie to explore what's underneath those boxes. Sadly, it closed the box real quickly after peaking underneath, retreating back to safety, conventionality. Maybe, this movie, suggests, there's too steep a price we pay for opening Pandora's Box.

MLYReviewed in the United States on April 9, 2021
1.0 out of 5 stars
Self-Indulgent Waste of Time
Verified purchase
Self-Indulgent Waste of Time. This movie exposes private and personal acts that are mature audience material, even though there are children in the scene. The lead actor and his family member made this movie, so it seems they wanted us to see this actor do these private things on camera for the first time. However, we already imagined that he was doing these things. Too much, too late. Watching this movie is a waste of time.
One person found this helpful

errin spellingReviewed in the United States on February 6, 2019
4.0 out of 5 stars
Don't forget you have children
Verified purchase
What a strange movie. Movies today want to shock you and this is one of those. It isn't funny. A light movie with a lot of heaviness thrown in,too. The characters are all lovable. Four adults with two little boys. When Jason plays a lullaby on the piano, the children fall asleep.
One person found this helpful

Tmm BReviewed in the United States on January 16, 2016
4.0 out of 5 stars
crazy sexy cool
Verified purchase
This is quirky funny a little sexy sleeper comedy about relationships. A couple who's marriage has gotten a little boring and their sex life has as well meets another couple in a park who are a little odd and outspoken and after a dinner invite is extended the movie goes into full throttle. This is so good and smart and funny and yes a little erotic with spot on performances from all four players involved. This little gem kind of flew under the radar upon release but am glad i found it on here.
4 people found this helpful
See all reviews
Back to top
Get to Know Us
Make Money with Us
Amazon Payment Products
Let Us Help You
EnglishChoose a language for shopping. United StatesChoose a country/region for shopping.
© 1996-2022, Amazon.com, Inc. or its affiliates