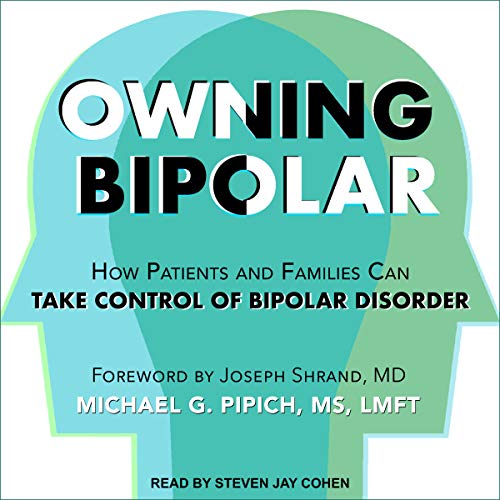 Owning Bipolar: How Patients and Families Can Take Control of Bipolar Disorder

Knowledge is power, and grasping the basics of bipolar disorder can give you the power you need to detect it, accept it, and own the responsibility for treatment and lifelong disease management. With its three-phase approach, Owning Bipolar can help you and your loved ones become experts at an illness that has called the shots in your life for too long. Now it's time for you to take control.

Accessible and encouraging, and accented with empathetic firsthand stories from people who share the condition, this book is a vital companion to help listeners understand, treat, and live successfully with bipolar disorder.

Special invitation from Audible!
Learn more about Membership
List Price: $17.49
You Save: $2.50 (14%)
By completing your purchase, you agree to Audible’s Conditions Of Use
Sold and delivered by Audible, an Amazon company
Share

J Wong
5.0 out of 5 stars As close to an instruction manual for Bipolar as you can get.
Reviewed in the United States on January 9, 2020
Verified Purchase
The title says it all. A family member is currently in the process of being diagnosed with Bipolar disorder. It has been an incredibly difficult process and has lead to a lot of heartache and confusion.

Owning Bipolar has been my field guide for getting through this process and what to expect for the future. It has also helped me understand a lot of the behavior I have witnessed from my loved one for our entire relationship and didn’t know what to call it.

This is not only a book for those living with bipolar disorder, it is an absolute must read for family members who have a loved one with this disorder. Highly recommended.
Read more
One person found this helpful
Helpful
Report abuse

Mikebudd
5.0 out of 5 stars Positive team works doesn’t need to be a struggle, acceptance is a key.
Reviewed in the United States on May 12, 2019
Verified Purchase
Great book. I listened to audio and enjoyed the presentation and content. In fact not only did I get the professional perspective, I realized that the teamwork is important to keep the patient from going too far astray. Danged thing , I enjoyed this book more than a lot of best seller books. I hope you do too.
Read more
3 people found this helpful
Helpful
Report abuse

JPress
5.0 out of 5 stars Compassionate understanding and cutting edge research. What a powerful combo!
Reviewed in the United States on May 27, 2021
Verified Purchase
My bipolar diagnosis is relatively recent, and I have struggled to come to terms with it. Owning Bipolar is an incredible resource for anyone coming to terms with their diagnosis or the diagnosis of a loved one. Pipich combines compassionate understanding with practical help plus the latest research- the combination is a godsend. I am eternally grateful to people who make it their life's work to educate and help everyday people like me (and maybe you?).
Read more
Helpful
Report abuse

Garret Marshall
5.0 out of 5 stars Pipich simply and eloquently says what I have been trying to express for years.
Reviewed in the United States on June 30, 2019
Verified Purchase
Owning Bipolar was recommended by a member in a BP support page I am in on Facebook. As someone who lives with this illness I'd like to say that Pipich has some of the most eloquent yet simply stated explanations and insights into our illness/disorder. Several times while reading, I have thought, "Yes! That's what I've been trying to express but didn't have the right words." I highly recommend it to those both newly diagnosed or those well into their treatment/recovery.
Read more
4 people found this helpful
Helpful
Report abuse

David Susman PhD
5.0 out of 5 stars Clear and useful guide for patients and families
Reviewed in the United States on September 25, 2018
As a clinical psychologist with many years of experience providing care to individuals with bipolar disorder, I was very interested in reading "Owning Bipolar: How Patients and Families Can Take Control of Bipolar Disorder" by therapist Michael Pipich. This book provides a clear and useful guide for individuals with a diagnosis of bipolar disorder and their families. The author describes three phases: 1) pre-stabilization and recognition; 2) stabilization and acting on it; 3) post-stabilization and living with it. I liked this structure, as most any person with bipolar disorder should be able to recognize where they are on this continuum and what the next steps would be for them to more effectively manage the illness. Pipich covers a lot of territory in the book, including origins of the illness, diagnosis, therapies, medication options, hospital treatment, postpartum onset, family support and more. Each topic is covered thoroughly and clearly, with relevant examples throughout. If you or someone you care about is dealing with bipolar diagnosis, this resource should be of considerable benefit to you. Mental health clinicians and students in mental health fields would also find it illuminating and of interest.
Read more
8 people found this helpful
Helpful
Report abuse

📚Bookwyrm📚
TOP 100 REVIEWERVINE VOICE
5.0 out of 5 stars Comprehensive text on bipolar disorder
Reviewed in the United States on October 1, 2018
Owning Bipolar: How Patients and Families Can Take Control of Bipolar Disorder is a comprehensive text on bipolar that would be useful for patients with bipolar and their families.Reading this as a layperson with bipolar in my family, I think it would also be useful for clinicians. Owning Bipolar covers its origins, diagnosis, what other conditions it can be confused with, why it’s difficult to accept, therapy, medication, and more. In fact, there’s a very useful list of medications used with bipolar as an index, with a lot of detail on each medication, its classification, main and secondary side effects, etc.

Pipich spends a lot of time discussing every side of each topic, whether it’s denial, reluctance to accept medication, etc. At each juncture, he states what he would say to a patient that was dealing with that issue, so the book is a concatenation of wisdom he shares in therapy, in essence making the book an albeit limited, but one-on-one very thorough therapy session covering every aspect of bipolar.

For example, Pipich states that many people are reluctant to take medications because they think it means there is something wrong with them, but then he goes on to point out discussion points that he would use to address their concern and thereby allow them to accept medication.

Pipich also explains about other disorders that can be confused with bipolar and points out the differences. According to Pipich, bipolar can be misdiagnosed as ADHD, OCD, personality disorders (borderline, narcissistic, and antisocial), schizophrenia, substance abuse, thyroid imbalances, traumatic brain injury, seizure disorders, and tumors. For instance, the difference between bipolar and OCD is that “OCD behaviors are caused by internal fears with the primary purpose of staving off anxiety. Bipolar mania is goal-oriented; that is, the behavior is driven to accomplish something—usually perceived to be something of great value, not simply avoiding anxiety.”

Pipich maintains that many people with bipolar disorder won’t look for treatment and those who do often don’t follow through with their treatment plan or take their medication faithfully. In some cases, those who actually want to be treated don’t have the resources or support to get it. But Pipich covers a lot of territory in his desire to arm patients and their families to have the best chance of success getting treatment and controlling their bipolar as a lifelong disorder.

This book is very dry and not exactly a fast read. It’s dense with advice and almost scripted scenarios for every state of a person with bipolar disorder’s treatment. Highly recommended for those with bipolar, their families and significant others, and clinicians looking for more information on bipolar disorder with much wisdom from Pipich’s years of practice.

I received this book as an Advanced Reader Copy (ARC) from the publisher through NetGalley. My opinions are my own.
Read more
3 people found this helpful
Helpful
Report abuse
See all reviews