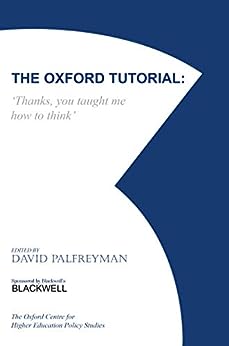 The Oxford Tutorial: Thanks, You Taught Me How to Think Kindle Edition

by David Palfreyman (Author), Alan Ryan (Author), Peter Mirfield (Author), Roger Pearson (Author), Richard Dawkins (Author), James Panton (Author), James Clark (Author), Andrew Smith (Author), Suzanne Shale (Author), Christopher Tyerman (Author) & 7 more Format: Kindle Edition
See all formats and editions
Sorry, there was a problem loading this page. Try again.
The Oxford Tutorial has an almost mystic, cult status. It is Oxford ‘premium product’ for which, via college academic fees, it commands ‘a premium price’. But the Tutorial has its critics, both within and beyond Oxford. Is it an anachronism in the mass higher education system of the twenty-first century? Is the traditional tutoring of Oxford’s undergraduates now too labour intensive and too expensive a burden for the University and its colleges as State funding of higher education declines? Do the dons want to escape the heavy burden of twelve hours per week of tutorial teaching and redirect valuable time into research as they key factor in achieving the plaudits of a successful academic career? Is the Tutorial a sacred cow to which Oxford pay mere lip-service as it quietly shifts to ‘small group teaching’?

Or is it a pedagogical gem, the jewel in Oxford’s crown, to be preserved at all costs as the best way to challenge, stimulate and truly educate oxford’s high-quality ‘young’ in the crucial ‘lifelong-learning’ skill of sound analysis and critical thinking? If Oxford lets the Tutorial wither, will it be failing future generations of talented undergraduates who need the intensity of the demanding tutorial teaching methodology to ensure their intellectual resources best serve them in their careers and in turn Society? Moreover, how does the Oxford Tutorial fit with the concept of a Liberal Education, and anyway what is higher education?

This little book brings together experienced Oxford Dons from across the academic disciplines who discuss their personal belief in and commitment to the Tutorial as an utterly essential element in all Oxford’s degree subjects. It is hoped that students new to Oxford will find these essays helpful in sharing with them, as ‘the consumers’, what the Dons, as ‘the producers’, are trying to achieve, while stressing that the whole process is both a ‘team effort’ and also one that is not fixed in format since it allows tutor and tutee to vary the nature of the Tutorial to optimal effect. Thus, it can be at the same time a process which falls apart if either undergraduate or teacher short-changes the tutorial experience. Yet, as the sometime President of Magdalen College, Oxford, noted when reviewing the 2001 first edition of this book in the Times Higher (13/9/02, p 23): ‘the tutorial is renewed, flexible, dynamic and popular’ (and he added, ‘even though this news often appears unwelcome to our national educational bureaucracy!’).

The sub-title (“Thanks, you taught me how to think”) comes from a former student writing to one of our Contributors after achieving a good degree result.

The Editor and the Contributors are grateful to Blackwell’s, the justly world-famous landmark Oxford bookshop since 1879, for support in the production and distribution of the 2001 first edition, and again for the 2008 second edition, which pays due tribute to another special feature of Oxford in the form of the tutorial as the trademark of the University and its colleges. This is a 2019 Kindle and Amazon paperback edition, with an added Primer.

4.0 out of 5 stars
4 out of 5
5 global ratings
How are ratings calculated?
To calculate the overall star rating and percentage breakdown by star, we don’t use a simple average. Instead, our system considers things like how recent a review is and if the reviewer bought the item on Amazon. It also analyzes reviews to verify trustworthiness.

There are 0 customer reviews and 5 customer ratings.
Back to top
Get to Know Us
Make Money with Us
Amazon Payment Products
Let Us Help You
EnglishChoose a language for shopping. United StatesChoose a country/region for shopping.
© 1996-2021, Amazon.com, Inc. or its affiliates