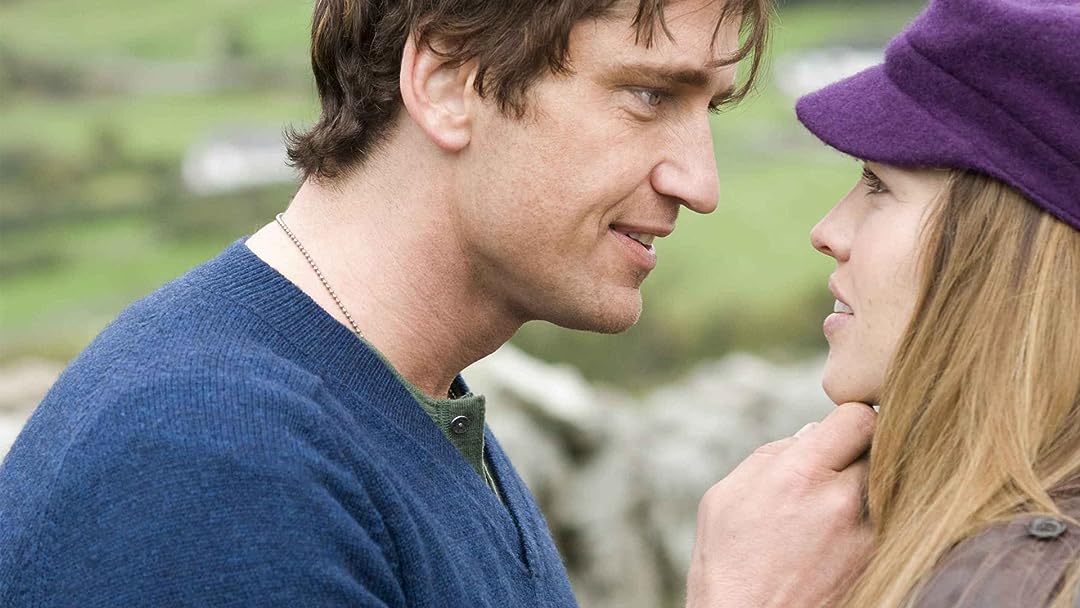 Eighth SamuraiReviewed in the United States on July 11, 2016
4.0 out of 5 stars
Well crafted, with good performances by Kathy Bates and Gerard Butler.
Verified purchase
I didn't read the book, so I'm only rating the movie... although, I might pick up the book one day to see what all the hubbub is about. The screenplay was fairly good with two exceptions: (a) the sex scene in Ireland seemed out of character/unnecessary and (b) the relationship between Hilary Swank's grieving widow and Harry Connick's lovesick bartender really missed. Gerard Butler turned in a solid performance (the occasional slip in his faux-Irish brogue didn't bother me too much) and Kathy Bates stole a couple of scenes, as you would expect. Also good supporting turns by Gina Gershon, Lisa Kudrow and James Marsters. Harry Connick, Jr. (who I normally like) had a purposefully unsympathetic role which was poorly written - I thought he was wasted in this film. Incredible camera work for all the scenes filmed in Ireland.

As others have noted, Hillary Swank can be great in certain vehicles, but totally miss in others. This movie falls toward the later for me: she's not terrible, but I never empathized with her character (she comes across as spoiled and entitled here) and I could envision other actresses who would be more engaging in the role.

Miska the AmazonianReviewed in the United States on July 4, 2020
5.0 out of 5 stars
If you watch this film, have a box of tissues handy...you'll need them!
Verified purchase
This is a new role for Hillary Swank and a fine job she did! I absolutely fell in love with the two main characters. For me, I think it all depends on who watches it. I think Hillary's job in this film was one of her BEST jobs! I think for some women she might have sounded entitled, but I think it's important to realize she's a New Yorker. City girls can come off a bit like that, I should know I am one myself... :) A film for me is not all about getting all the technical parts of a film correct. The film must move me and in the case of a comedy/romance, it should make me laugh and cry in the same breath, and boy did this ever! This film is on my top 10, if not Top 5 of all RomCom's out there! Great film!
3 people found this helpful

teols2016Reviewed in the United States on June 27, 2014
5.0 out of 5 stars
An Unusual Role...
Verified purchase
I don't recall too many, if any, romantic comedies on Hillary Swank's resume. In fact, I don't recall too many comedies on her resume. But, in a film where she doesn't die by the end, Swank shines as always as she plays a woman who, in the wake of her beloved husband's sudden death, must learn to pick up the pieces and move on in her life. As I've said, Swank did as great as ever here and this change of genre was surprising but ultimately welcome. Did anyone beside me see Phoebe from "Friends? Yes, I know Lisa Kudrow was in the movie, but unfortunately, she's Phoebe. So seeing her as a female version of Joey was just weird...and sometimes a bit forced. But she and the rest of the cast were still pretty good throughout the film. Even Harry Connick, Jr. showed some life here and there. And Gerard Butler left us with a memorable performance as Swank's now-dead husband, making us miss him all the more. My only wish is that we'd seen more of Kathy Bates on the grounds that she's just awesome. My biggest praise goes for the ending as it did not go the way we all thought it would. Oh, there were plenty of hints towards the ending every one of these movies moves towards, but there's a nice, and completely believable, twist at the end that leaves us with as much, if not a bit more, satisfaction as if a stereotypical ending had been chosen. This is a fine film. Enjoy. P.S.: I love you, film.
8 people found this helpful

neognomicReviewed in the United States on May 19, 2020
3.0 out of 5 stars
3.25
Verified purchase
I'm with Ciara, "I don't get it." Too much of a chik-flik, predictable and overall, depressing.
I would not rent it again. The Karaoke Scene was the only part I really liked, tho' some of the scenes in Ireland were pretty good too.

But, ..., tho' I'm not one who dwells on anything that cannot be changed(like death), I can see how this can be cathartic and for anyone who is old enuf to have lost many/most/all of those one has loved, it M/B a good watch, with a box of tissues.

CottonReviewed in the United States on June 19, 2019
5.0 out of 5 stars
Hail to Gerard!
Verified purchase
There is not a type of person Gerard cannot bring to life. Here, in a good rom-com, he is an Irishman ANYone would like. He and Hillary seem mismatched, but his spirit is generous and he loves her through conflict. There is heartbreak and you will apply insights here to your own relationships. Ireland is glorious - so are its men! Laughs throughout. When it's over, you will wait for a letter from Gerard too.
2 people found this helpful

ToroloverReviewed in the United States on May 22, 2016
5.0 out of 5 stars
Extremely poignant movie - HIGHLY RECOMMENDED.
Verified purchase
I usually watch a lot of court dramas and suspense thrillers, and I seldom pay attention to romance movies. Since my friend recommended to me highly, so I just gave it a shot. It really exceeds my expectations. I watched "The Notebook" acted by Ryan Gosling and found it very touching. But this one's pathos is beyond description, I couldn't help stopping my tears rolled down my cheeks at the end of the movie. HIGHLY RECOMMENDED if you are looking for a romance movie which will touch your inner heart
6 people found this helpful

Pam RichardspnReviewed in the United States on May 12, 2020
2.0 out of 5 stars
That a dvd will last longer than a few months
Verified purchase
What I didn’t like is that it quite working. I bought this dvd the middle of Dec.2019. I have watched this movie only 3 or 4 times and it quite working right in the middle. This is the problem with allot of dvd’s. I still have VHF tapes from the mid 1995 and they still work.that

Amazon CustomerReviewed in the United States on December 28, 2008
3.0 out of 5 stars
Funny, sweet, and sappy
Verified purchase
"P.S. I Love You" is the story of Holly (Hilary Swank), a young widow whose recently deceased husband, Gerry (Gerard Butler), launches a posthumous plan of helping his beloved wife survive her first year without him. To help Holly deal with her grief, Gerry arranges for a series of special gifts and letters to be delivered to Holly after his death. With the help of her family and a few girlfriends, Holly begin to lift herself out of her depression and embrace the chapters of her life that have yet to come.

This is a sweet story that's romantic and incredibly bittersweet. The movie includes many flashbacks that depict the life Holly and Gerry shared together, which are touching and allow the audience to connect with Holly and feel her pain. There are also several beautiful sequences shot in Ireland and a strong group of supporting cast members. Obviously, so much of the film's events are incredibly unrealistic, and I also didn't care at all for Holly's relationship with the oddball David (Harry Connick, Jr.), but fortunately the film resolved that subplot very well toward the end of the film. "P.S. I Love You" is a decent movie about love, loss, and living life to the fullest, but there are definitely better romantic films out there.
2 people found this helpful
See all reviews
Back to top
Get to Know Us
Make Money with Us
Amazon Payment Products
Let Us Help You
EnglishChoose a language for shopping. United StatesChoose a country/region for shopping.
© 1996-2021, Amazon.com, Inc. or its affiliates